Holiness is possible and church provides tools to attain it, cardinal says 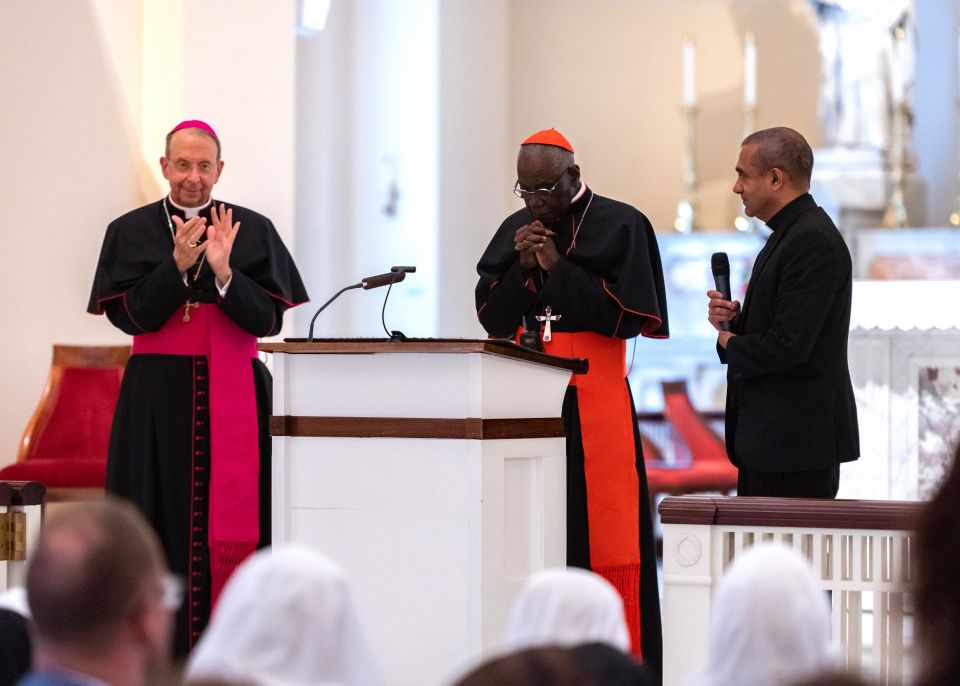 BALTIMORE — Holiness is possible, and the Catholic Church provides the tools for attaining it.

That was the theme of an address delivered May 15 by Guinean Cardinal Robert Sarah at the Basilica of the National Shrine of the Assumption of the Blessed Virgin Mary in Baltimore.

The evening talk, which was preceded by a morning Mass celebrated by Cardinal Sarah, was part of the closing celebration of the 200th anniversary of the dedication of the basilica, the first Catholic cathedral built in the United States.

"Holiness is nothing other than living exactly as God wants us to live, by being conformed more and more to his son," said Cardinal Sarah, former prefect of the Congregation for Divine Worship and the Discipline of the Sacraments.

Prayer, fasting and penance can be invaluable aids for helping individuals in the pursuit of holiness, Cardinal Sarah said.

Prayer fashions one's true identity, he explained, and fasting helps discipline hearts and free them from distraction. Through daily meditation on Scripture, he said, "we allow God to shape our minds and we learn to recognize his voice."

"These practices are nurtured in the community of the church," Cardinal Sarah said. "In community life, we need to surround ourselves with brothers and sisters, and good mentors, who reinforce our daily rhythms of prayer, penance and meditation upon the word of God and who encourage us in the pursuit of holiness.

The pursuit of holiness requires believers to "quiet" their hearts, Cardinal Sarah said.

"In time, we discern the contours of our hearts," he said. "We learn to recognize temptations more quickly. We uncover and correct subtle habits toward evil and deceptions that we accepted in years past. Over the course of years, each systematic tendency toward evil can be overcome with the help of God's grace."

A prolific author whose books include "The Power of Silence," Cardinal Sarah said the quieting of one's heart makes possible silence. He defined silence not simply as the lack of noise, but as "quiet chosen." Silence is a "word in the soul, a participation in the word of God," he said.

"In silence," the cardinal said, "we discover the most intimate prayer, the holy and eternal presence of God within our hearts."

Silence becomes a place of refuge, Cardinal Sarah said, the place in which persons may offer to God every experience and every detail of their day.

"There is no better place to encounter God in silence than in eucharistic adoration," Cardinal Sarah said. "There, we begin to resume the posture of right relationship with our creator. Adoration is evidence of our desire for an astonishing intimacy with God."

Cardinal Sarah urged his audience to yearn to suffer with Christ. He also called on Catholics to reflect deeply on the vocations to which they are called by God and to recognize that vocations require ongoing formation.

"Our habits, our desires, our expectations will not remain the same as when we entered seminary or religious life or married life," he said. "This change in us is part of God's plan."

Approximately 250 people attended the lecture, which also was livestreamed on archdiocesan social media.

Earlier in the day, Cardinal Sarah noted in his homily at Mass that the basilica's architecture — most prominently its grand dome that lets in natural light via a series of skylights — highlights the call to walk in God's light.

The alternative to God is nothing, he said, noting that the world must choose light or darkness.

"The challenges of our times are not an excuse to re-create, to manufacture the church according to the image of postmodern society in the illusory hope of not losing numbers by changing her doctrine and moral teaching," he said. "Rather, our times demand from us greater love for the light we receive from Christ, and renewed fidelity to the Gospel."

Father Boric noted the basilica marks the first anniversary of the dedication of a perpetual eucharistic adoration chapel in the church's undercroft May 31. He urged Catholics to spend time in prayer inside the chapel.

"If we had everyone in this archdiocese committing to one hour of prayer in the mother church of the country, I can't imagine what would happen," Father Boric said.

Angelus Virata, director of evangelization for the basilica, said Cardinal Sarah's talk reminded her of the importance of making prayer the foundation of everything she does — especially in parish ministry.

"Prayer is the work for the work for evangelization," she told the Catholic Review, Baltimore's archdiocesan news outlet. "Without prayer, without that connection with God, who can you evangelize?"

"We need to be completely in lockstep with God," she added, "because he's the one who is going to give me the words to speak when people ask me questions that I may not know how to answer."

Holiness is possible and church provides tools to attain it, cardinal says