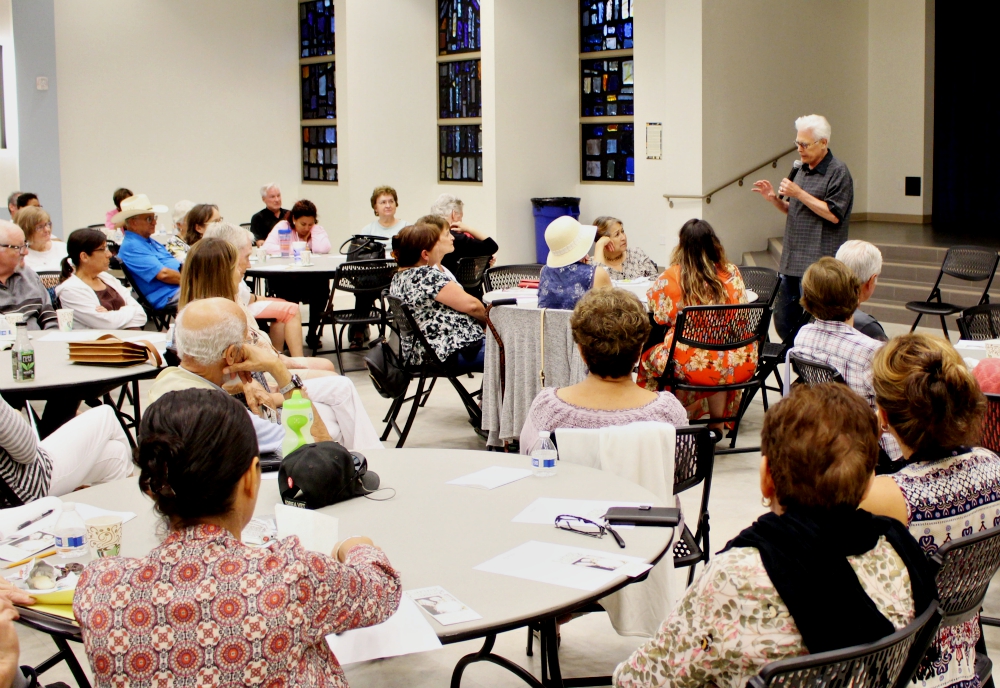 Fr. Bill Moore speaks during the Caring through Cancer talk at Holy Name of Mary in San Dimas, California, Aug. 20. The event brought caregivers, cancer survivors and newly diagnosed cancer patients together to talk about their experiences. (Heather Adams)

Since his prostate and bone cancer diagnosis on March 12, 2017, Fr. Bill Moore has come to describe his experience with one word: overwhelming.

In a room of about 120 people at Holy Name of Mary Parish in San Dimas, California, on Aug. 20, Moore, priest at the parish, led a support group talk on cancer. He brought out laughs and smiles but never sugarcoated what living with cancer is like, encouraging people to talk about their true feelings.

"I'm not the same person I was a year ago," he said. "Everything's harder and different."

The talk, called Caring Through Cancer, was put together by Holy Name of Mary's Health and Wellness Ministry, one of about 90 ministries in the church.

"My hope is that all that takes place here, takes place in the context of working towards healing and acknowledging we have a community here," said Fr. Rich Danyluk, priest at Holy Name of Mary.

Moore and Danyluk have been friends for more than 50 years. Although they'd been to the hospital countless times as priests, Moore said that going as a cancer patient was an entirely different experience.

"I had never stayed," he said. 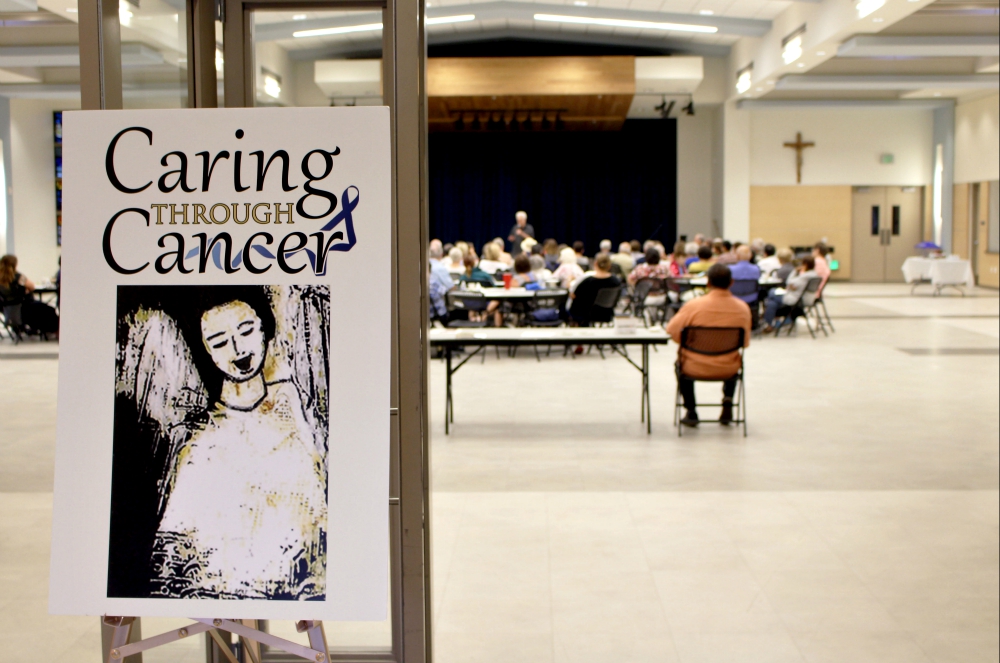 Caring Through Cancer is one of nearly 100 ministries at Holy Name of Mary Parish in San Dimas, California. Each year, the parish looks at its ministries and asks, "Is there anything missing?" (Heather Adams)

Last year, the parish specifically focused on ministries to seniors. But when church staffers sat down to discuss which ministries were missing, a ministry on cancer seemed like a natural fit.

Holy Name of Mary has some programs people might expect, such as high school confirmation and marriage ministry, but there's a lot more. No Barriers to Christ is a ministry specifically regarding LGBT people and their family and friends. Speaking about LGBT issues is important to Danyluk. He came out to his previous congregation in the Bay Area in 2005.

"Being gay in the Catholic Church means, for me, that all my life I was brought up feeling that I was unworthy and didn't belong and very negative things were said from the church," he told SF Gate. "Hearing that over and over again, you could almost believe it."

One of the other missions at Holy Name of Mary is centered on the environment, and the Social Justice Commission identifies underserved populations in their area.

"The visionary mission of the Social Justice Commission is to support Jesus' message of compassion, love and service," the parish's website says.

The Sanctity of Life Ministry prays for and assists those who are facing life and death issues, Martha Ministry gives meals to those in need, and St. Joseph's Ministry provides financial help to people in the parish who are experiencing hard times.

"Every time I walk down the aisle, kiss the altar, turn around and look at the people," Danyluk said, "I'm looking at a field hospital of brokenness."

Caring Through Cancer specifically deals with issues cancer survivors know all too well.

Attendees include survivors who have battled cancer multiple times to one woman starting her first round of chemotherapy the next day — she asked the group for advice.

People talked about how important it is to remember to pamper and take care of yourself, tips about recording doctor visits so you don't forget what they say, and how to talk to your kids about having cancer.

Some days, Moore said, he simply makes dinner and he's tired. Other times, like at the talk, he said, he feels good — but something's different.

Moore said the way he talks has changed, describing it as more "quirky."

Danyluk said that even as a caregiver, the way he prays has changed. "You'll never pray the same way again," he said.

At the start of the service, together the room read a prayer written by Moore.

"As we face the unknown and fear of living with cancer, we pray that in doing so, we might find empathy for the struggles of all who suffer," the prayer reads. 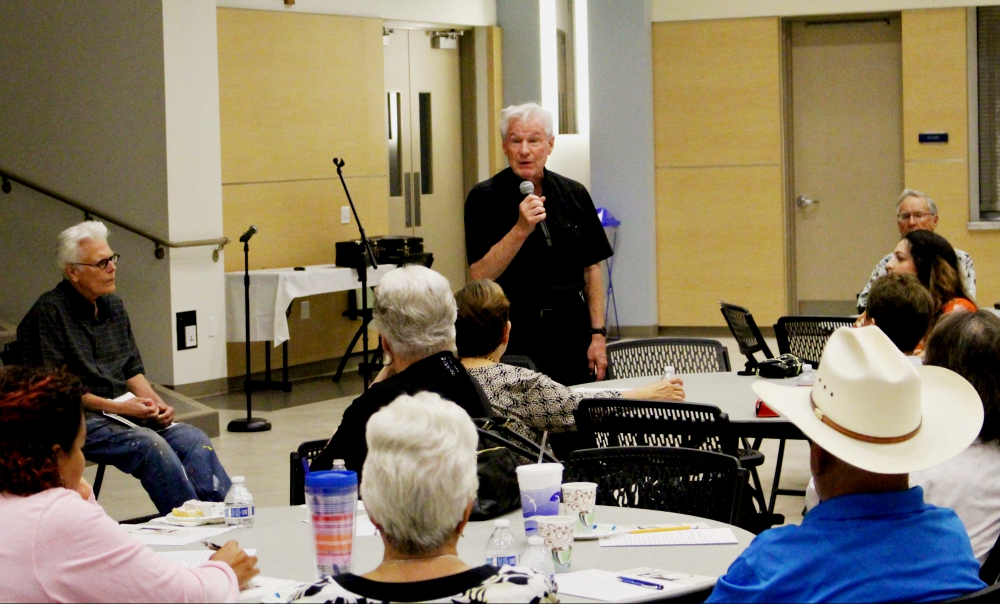 While he said he felt overwhelmed, attendees added that they felt their own range of emotions from scared to angry to "surreal." One woman suggested, "Why not me?" But another in the audience asked, "Why me?"

"I see heads nodding with that one," Moore said as he looked around the room after that question.

The goal of the program was to "listen and share our journeys of caring through cancer as one faith-filled community" and, in that moment, there was an overwhelming sense of understanding of each other.

At the end of the service, the group said the same prayer that started the program.

"May our physical, spiritual and emotional pain, our regimen of pills, tests and treatments, remind us that all life consists of joy, struggles, victories and defeats," the prayer continued.

Although the words hadn't changed, somehow it didn't feel the same as an hour before.

"Our parish is very big; our church is very big. But if we get to know each other in smaller groups," said Lani Galvan, volunteer coordinator, "it makes our parish smaller."

Danyluk said it's not about the number of ministries the parish has or how full its parking lot is.

"I'm more interested in how we serve the people," he said. 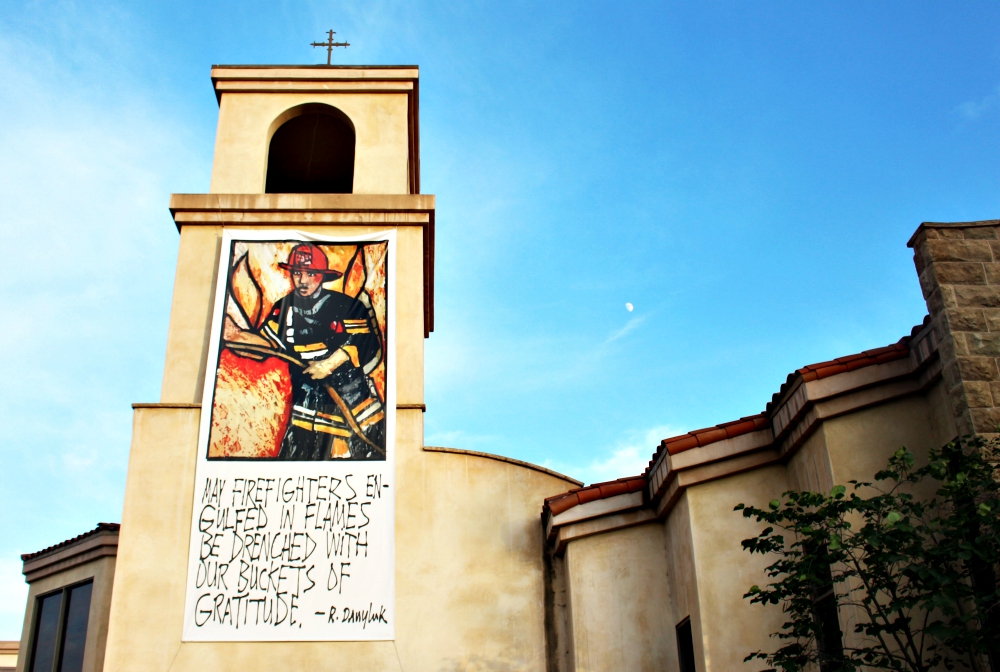 Fr. Rich Danyluk and Fr. Bill Moore work together to create artwork for Holy Name of Mary in San Dimas, California. Moore draws the pictures and Dayluk creates the captions. This banner thanks firefighters dealing with wildfires all over California. (Heather Adams)

Danyluk said that once when the parking lot was full, there was a man in the church whose wife had been taken to the hospital and diagnosed with cancer. But, Danyluk said, nobody knew how badly he was hurting.

"It was business as usual around the table, when someone's sitting there broken," he said. "That's not ministry. And that's not what this property is about."

That moment made a profound impact on him, and when he heard Pope Francis' idea of a field hospital, it forever changed his idea of ministry and theology, he said.

One of the parish's biggest ministries isn't even listed on the website. It's simply the idea that no staff member ever turns someone away.

When someone walks in a staff member's office, staffers always ask, "How can we help you?" Danyluk said, adding that they are constantly in the mindset that they always have time for people.

"No matter what it is, we make efforts to help," he said.

Charlie Martinez, director of pastoral care, said it's important to their work that they take the time to listen to people's stories.

"We have developed a culture here with Father [Danyluk] that it's our people first," Martinez said. "It's what do our people need."

Jackie Doud, parishioner at Holy Name of Mary and an NCR board member, said that welcoming feeling has trickled down, and that she always feels welcome in the offices or asking to come talk to a priest, no matter when it is.

Danyluk said that idea goes all the way from staff members to children at the school.

He said in one of the preschool classrooms there's a designated person known as the "comforter." That delegated person's job is the comfort other class members when they get upset. But it teaches them to always watch out and comfort each other when needed.

When Danyluk saw a young girl crying because she missed her parents, he tried comforting her, saying her mom and dad would be back after school. But his words weren't helping, he said.

Another little girl stepped in, put her arm around the upset child, looked up at Danyluk and told him she'd take care of her peer.

"This is a place where we try to care for each other," he said. 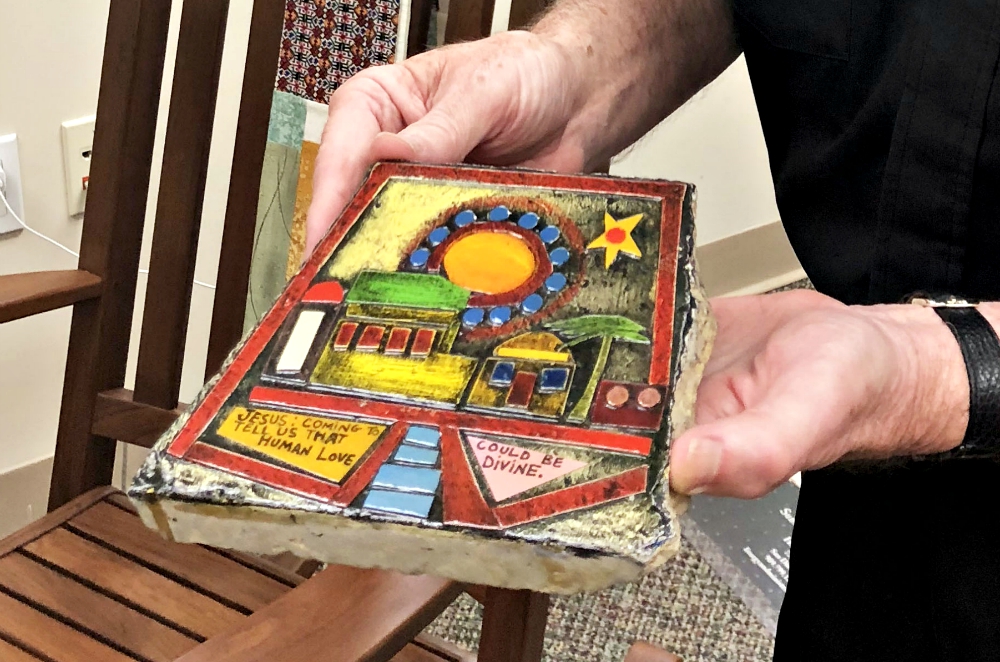 While staff members are working so hard to help others, they are also dealing with their own problems. But it's those challenges that make them even better at what they do, Danyluk said.

And just maybe, that brokenness might bring a new program to Holy Name of Mary next year.

Danyluk said as church staffers continue to be shaped by God, they'll keep their parishioners at the center of everything they do.

"If we don't feel better after going to a service here, what's the bother?" Moore asked.