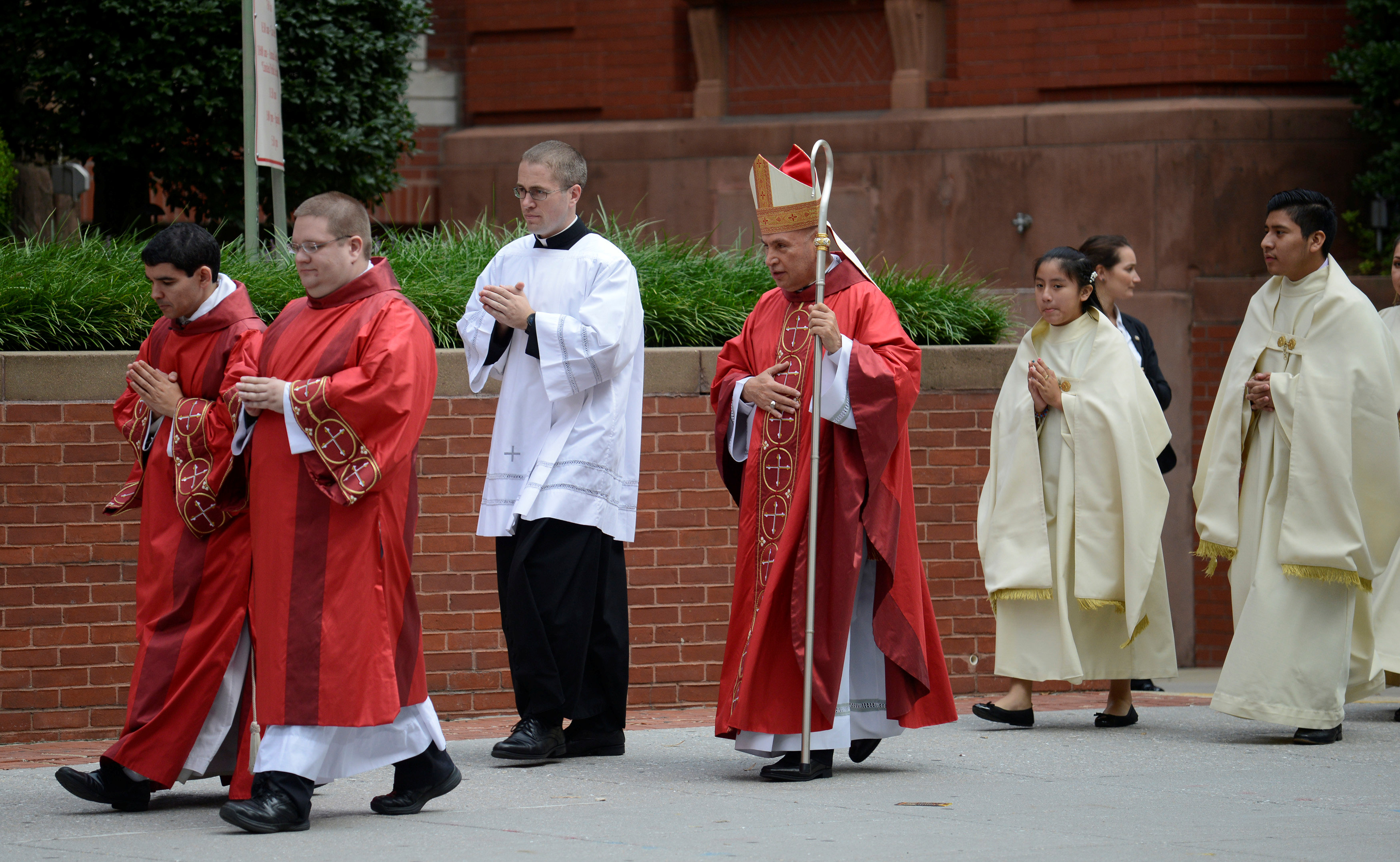 Washington Auxiliary Bishop Mario Dorsonville walks with his crosier as he arrives Sept. 30 at the Cathedral of St. Matthew the Apostle for the annual Red Mass. The Mass traditionally marks the start of the court year, including the opening of the Supreme Court term. (CNS/Reuters/Mike Theile)

Those attending the 66th annual Red Mass in Washington Sept. 30 paused from news coverage of the Supreme Court vacancy, and instead prayerfully sought God's blessing on all those involved in government positions, the law profession and the administration of justice.

"Could there not be a better time, both in our church and nation, to benefit from the healing power of the Holy Spirit?" Vaghi asked during his homily. "It is a power that treats the anger and divisions that so need the healing touch of our God if we are to continue our respective missions with love -- a genuine love for each other -- with effectiveness."

The priest noted the need to call on the Holy Spirit's renewal at a difficult time for the country and the archdiocese.

And while Vaghi chose not to specifically name the issues causing the division, participants at the Mass entered the cathedral walking past protesters distributing buttons reading "I Believe Christine Blasey."

Some of the protesters respectfully attended the Mass -- where there were no disturbances -- and later about a dozen protesters chanted the same slogan outside the building while participants left the cathedral.

In testimony at a Senate hearing three days earlier, Christine Blasey Ford alleged that Judge Brett Kavanaugh, a nominee to serve as a Supreme Court justice, had sexually assaulted her while the two were students at local high schools 36 years ago.

During the hearing, Kavanaugh strongly denied the allegation and other claims of sexual misconduct as a high school or college student, saying he had never assaulted anyone in his life. Kavanaugh, a Catholic, who is a member of the John Carroll Society, was not seen at the Red Mass.

Additionally, the U.S. Catholic Church has been facing a clergy sexual abuse crisis, following the news that retired Washington Archbishop Theodore McCarrick has been accused of abuse and sexual misconduct, and the release of a Pennsylvania grand jury report detailing claims of abuse of more than 1,000 minors allegedly committed by 300 priests and other churchworkers in six dioceses in that state over a seven-decade period, beginning in the 1940s.

Cardinal Donald Wuerl, the current archbishop of Washington, did not attend the Mass. The cardinal has defended his child protection efforts from when he earlier served as a bishop in Pittsburgh, but he faced strong criticism after the report's release.

In a letter to priests of the archdiocese, Wuerl said he planned to go to Rome soon to ask Pope Francis to accept the resignation that he had submitted nearly three years ago when he turned 75, as required by canon law. He explained that he would take that action "so that this archdiocesan church we all love can move forward" and it can experience "a new beginning."

Washington Auxiliary Bishop Mario Dorsonville represented the archdiocese as principal celebrant at the Mass, celebrated each year on eve of the opening of the Supreme Court's new term.

Dorsonville called on all those at the Mass to search out truth, unity, and prayer in "times of turbulence" for all to achieve justice.

In his homily, Vaghi said: "The Spirit comes -- if you will -- with the tenderness of a true friend and protector, to save, to teach, to counsel, to strengthen, to console, to renew, to heal."

Now in his 32nd year as chaplain of the John Carroll Society, Vaghi called on the Holy Spirit to move the faithful into being "men and women of justice, compassion, boundless mercy and joy in our respective vocations."

The priest prayed for the Holy Spirit to guide the faithful in their work as members of the legal profession and in government service. The Mass attendees included John Roberts, chief justice of the United States; Associate Justices Clarence Thomas and Stephen Breyer; and Anthony Kennedy, the court's recently retired associate justice.

Speaking of the rights outlined in this country's Declaration of Independence, Vaghi said: "Life is God's first gift to us. And I speak of life in every circumstance and condition, and especially the lives of those on the periphery of society, the poor and needy."

"Only through constant prayerful study, vigilance, and personal and collective effort will the magnificent vision of our forebears remain a reality today and endure in the years to come," he said.

Isela Blanc, a member of the Arizona House of Representatives who was visiting Washington to see U.S. Sen. Jeff Flake, R-Arizona, on the Kavanaugh matter, had not planned on attending the Red Mass.

But the Catholic lawmaker said she decided to participate and wear one of the protester's pins to "bring attention politely, quietly, and standing up" to those in power who she said doubt survivors of sexual abuse.

She expressed concern that "if someone else has more power than you, your voice no longer matters."

Blanc told the Catholic Standard, Washington's archdiocesan newspaper, said she hears the Gospel message preached at church but fails to see it always lived out in her home state when issues are politicized, often to the detriment of people of color and people in poverty.

"It's devastating," Blanc said, adding that she was pleased to hear the issues of freedom and justice highlighted during the Red Mass.