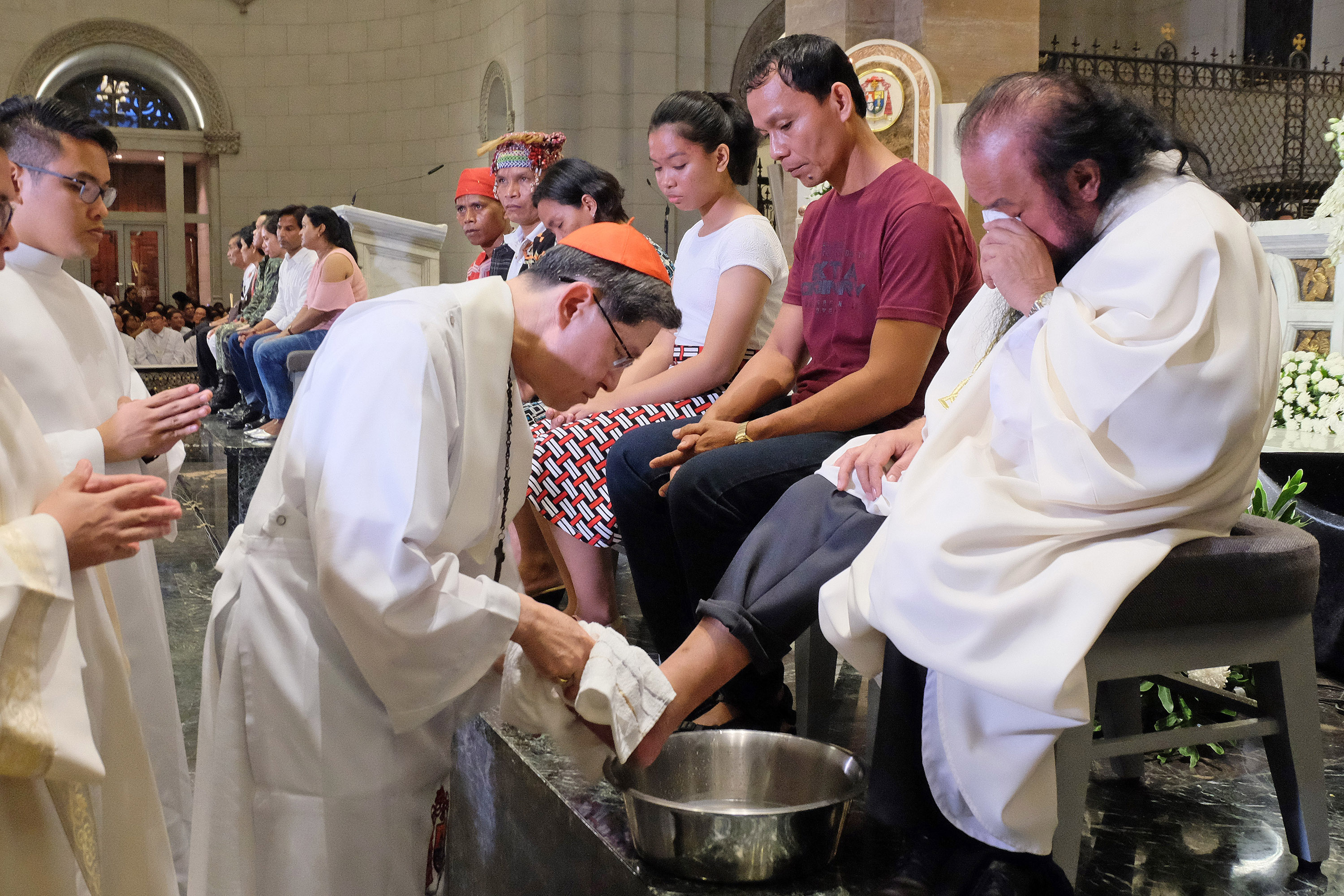 Father Teresito Soganub, who had been held captive for months in Marawi, Philippines, cries as Cardinal Luis Antonio Tagle of Manila washes his feet during the Mass of the Lord's Supper March 29 in Manila. Father Soganub is vicar general of the prelature of Marawi. (CNS/Roy Lagarde, courtesy CBCPNews)

Celebrating the Mass of the Lord's Supper, Manila Cardinal Luis Antonio Tagle washed the feet of a priest who had been held captive for months and the parents of a slain Filipino migrant worker.

At the Mass Holy Thursday, March 29, he washed the feet of 12 people, representing Jesus' aim to teach his apostles to serve. He also washed the feet of migrants and refugees, emphasizing Pope Francis' call to open hearts and minds to them, and a married couple from the Philippine Navy.

But among the most emotional moments was when Tagle washed the feet of Father Teresito Soganub, vicar general of the prelature of Marawi. The priest was held captive by extremist gunmen for four months while they occupied the predominantly Muslim city of Marawi last year.

The Philippine online news agency Rappler.com reported that Soganub began crying as the cardinal washed his feet. Tagle put his forehead on Soganub's forehead at the end of the ritual.

Tagle also washed the feet of the parents of Joanna Demafelis. In February, more than a year after she was reported missing, Demafelis' body was found dead in a freezer in her employer's apartment in Kuwait; the body showed signs of torture.

Earlier in the day, during a chrism Mass, Tagle warned priests to shun and fight "manipulative strategies" that sow division to serve political interests, reported ucanews.com. He said technological advancement in communication has been reduced to strategies to manipulate people.

He told priests who renewed their priestly vows to "put a stop to fake news."

"We are not called and consecrated to bring fake news, only good news, especially through the integrity of our lives," the cardinal said.

"Evangelization happens in a covenant relationship, not in a context where some see people as objects to be manipulated for one's purposes," he said.

The cardinal said proclaiming the Gospel requires "attentiveness" to human conditions, specifically to the poor and those who are suffering.

"Many people don't listen to the good news because they don't see it from the one talking," said Tagle as he urged priests to maintain their "integrity" as bearers of good news.

He said Catholics these days "are looking for people of integrity whose words will match their action."