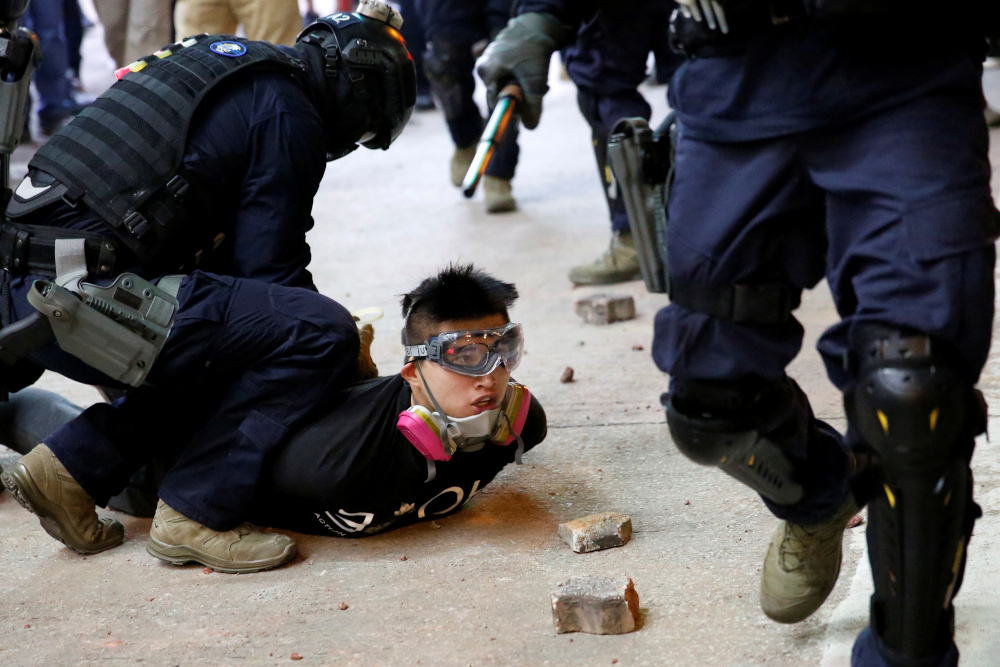 An anti-government protester is detained by riot police in Hong Kong, China Oct. 27, 2019. As protests pitting pro-government groups against pro-democracy protesters continue, a bishop urged Catholics to pray for the realization that all are humans and not "cockroaches or dogs." (CNS/Reuters/Tyrone Siu)

As demonstrations pitting pro-government groups against pro-democracy protesters continue, a bishop urged Catholics to pray for the realization that all are humans and not "cockroaches or dogs."

Ucanews.org reported Auxiliary Bishop Joseph Ha Chi-shing of Hong Kong addressed a prayer gathering of some 300 people Oct. 26 at Chater Garden in the Chinese-administered city where demonstrators continue to demand freedom and democracy.

The bishop prayed that "God can help us realize that everyone is human, not cockroaches, dogs or yellow objects," reported Radio Television Hong Kong.

The prelate referred to slogans and statements in which pro-government groups often referred to protesters as "cockroaches," while protesters called police officers "dogs."

A senior police officer was accused of describing a protester as "a yellow object." His comment came after a video clip that showed several officers kicking and attacking the protester.

Ha explained that the prayer meeting was not held in a church but at a public place to show that the Catholic Church cares about society. He said Hong Kong was now filled with hatred and anger. Violence can only beget more violence, but never justice, he said.

The bishop reiterated his call for an independent probe into the four-month movement. He also shared his belief that God can lead Hong Kong to reconciliation and peace by taking the first step of truth-seeking.

A Catholic identified only as Cheung, who attended the prayer meeting, said the young people who spearheaded the protests "may be exhausted because the Chinese government never heard their voice."

Cheung expressed hope that the "one country, two systems" system that was agreed upon in China's administration of Hong Kong would remain, helping people to "enjoy freedoms and universal suffrage" promised in the Basic Law.

Meanwhile, Cardinal John Tong of Hong Kong said he wanted the government to listen "to the voices of the people and enforce the law with a conscience."

In an interview with Vatican News, the cardinal said he was saddened by the social situation, adding that Hong Kong people must remain hopeful, avoid violence and do all they can to rebuild harmony.