Honored by LCWR, 'elder' speaks of its origins 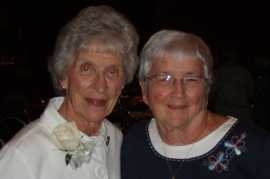 Brennan, an IHM from Monroe, Michigan, is a theologian and former LCWR president; she played a key role in the renewal of religious life following the Second Vatican Council.

Accepting the award, the 86-year-old Brennan spoke of the origins of LCWR as she thanked the assembly for the honor.

“In retrospect I thought that perhaps how I could best respond as one of the ‘elders’ of the LCWR,” she said, “and in this time of Vatican Investigation, is to testify once again to the wonder of the beginning years when the conference was first invited into existence by Pius XII in 1952. As we know, and maybe need to remember, it was not a grass-roots organization.”

Recalled Brennan: “It startles us a bit today when we reflect that our major superiors of a past time, were somewhat reluctant to take up the mandate of Pius XII … content as we were with the individuality and charisms of their (and our) own congregations, the cut and color of our 2 habits and head-pieces, the burgeoning ministries in schools, hospitals and social agencies, the full novitiates, the construction of juniorates. We had the NCEA (The National Catholic Education Association), the NHA (the National Health Association) the Sister Formation Movement. What more did we need?”

She said it took five years for the women religious to respond to Pius’ call. That was when some 250 heads of American communities gathered in Chicago in 1956 to discuss once more the mandate of Pius XII.

“A simple intervention of one of the participants ended the doubt and the debate. Mother Marie of the Ursulines took the floor and with the simple statement ‘Rome wishes it, and, as obedient children of the church, there should be no hesitancy.’ The Conference was born.”

Brennan then spoke about the influence Loretto Sister Mary Luke Tobin had had on her life – and on women religious at the time of the council. She said she first met Tobin in 1966 at her first Conference of Major Superiors of Women Religious meeting.

“As an auditor and the only American Woman Religious at the Council, [Tobin] had been assigned to the commission in charge of drafting the [council document], The Church in the Modern World. Cardinal John Dearden of Detroit, the convener, allowed the auditors to speak and Luke joined fully in the struggle to word its prophetic message.

“As Mary Daniel and Lora Ann point out in their book, The Transformation of American Catholic Sisters, Luke, on her return from these last sessions of the council, became literally, “a roving cheerleader for its themes … She crisscrossed the country bringing its themes to congregation after congregation.”

“I do believe that the LCWR is gift,” she said, “a gift not of our own making … but given to us… and entrusted to us. And I do believe, as well, that this time of Apostolic Visitation may be one of its finest hours.”

She finished her remarks by quoting a poem entitled "Gift" by W.S. Merwin, the 2009 U.S. Poet Laureate.

“Surely the author of this poem was not thinking of LCWR when he crafted his thought. Very likely, he may not have even have heard of us. But then, good poetry, more often than not, escapes its author in the end, becoming instead the property of whoever and to whomever it speaks … resonating with deep feelings, opening minds and hearts with its message and meaning as it touches and speaks to others.”

Honored by LCWR, 'elder' speaks of its origins