'I didn't have to be afraid of the border anymore'

by Tom Roberts
This article appears in the Immigration and the Church feature series. View the full series. 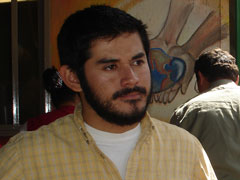 Tucson, Ariz. -- What Leo Guardado most remembers about crossing the border back in 1991 was moving along in moonlit shadows, trying, as a 9-and-a-half-year-old, to stay low and to keep his own shadow from showing.

He realizes, as he talks about it, that most of his memories of that 26-day trip play out in moonlight, because it was almost always night when he and his mother, Maria, and about seven others from their small hamlet in Chalatenango, a northern province in El Salvador, moved through deserts and jungle-like terrain and crossed rivers to get to Tijuana, Mexico, and the short final scramble to San Diego.

In the two decades since, Guardado became a successful student (he was wait-listed at Yale and offered a full ride and stipend by Swarthmore College before choosing St. Mary’s College of California), studied in Spain, earned a master’s degree in religious studies at the University of Notre Dame in Indiana, and currently is engaged in a long project of testing his attraction to a life with the Trappists.

But for now and the near future, at least, the 29-year-old is focused on the U.S.-Mexico border and the social justice issues surrounding immigration as director of social ministry at Most Holy Trinity Parish in Tucson.

The approach to the border this time, as an adult and from the U.S. side, has a certain symbolic significance. Guardado doesn’t fear the border any longer as he did for so long as an undocumented boy and young adult in an alien land that quickly became home for him. By the time he was a teenager and excelling in school academics and politics, he was feeling more American than Salvadoran. That feeling is why he decided against moving back -- to a grandfather he loved and who loved him dearly and had cared for him. It is why he held out against the sure bet of schooling in his native country and opted for uncertainty here.

Guardado’s mother had originally come to the United States in 1986, the year an immigration reform act was passed granting amnesty for undocumented workers under certain conditions. She had stayed for four years, intent on raising money so she could care independently for her son as a single parent. She returned for six months in 1991.

“She’s always said she didn’t know if she’d return to the United States again, but that she wouldn’t return without me,” Guardado said. He said it took her about six months to convince him that living in the United States would be best. So the two headed north that same year, having paid the price for a string of coyotes (guides) who led them along the way, to safe houses, van rides, and one particularly harrowing stretch in the fake bottom of a truck trailer. It took them 26 days in all to finally make it across. The first try was unsuccessful, and he remembers running back to Mexico -- before the U.S. began building a wall -- bounding “from rock to rock to rock” to avoid Border Patrol in all-terrain vehicles. About two weeks later they tried again, along trails and over a little hill, as he remembers it, before making it to an abandoned trailer on the outskirts of San Diego, and eventually to relatives in Los Angeles.

Guardado’s feeling of belonging in the United States, however, hit hard against the reality of being undocumented. In his junior year at Cathedral High School in Los Angeles, a school run by De La Salle Christian Brothers -- an order and an experience that deeply shaped his future -- he was asked to be one of four students to represent the brothers at a youth gathering in England. All expenses paid. It was a huge opportunity for this child of poverty, whose mother cleaned the home of a wealthy family and watched their children. But he spent months making excuses about why he couldn’t go, fabricating stories about visiting relatives until, worn down by the incredulous queries of one of the brothers, confessed that he didn’t have any papers, that he was undocumented, a fact that he had kept to himself. He couldn’t leave the country.

That admission led ultimately to a meeting with a lawyer who handled immigration cases and was himself from El Salvador. With the lawyer’s help, Guardado received the court’s permission to continue toward U.S. citizenship, which he eventually attained last year.

Following his studies at Notre Dame, Guardado worked in the ministry and mission department at St. Mary’s, and organized immersion programs to the border. Eventually, he was offered the job at Most Holy Trinity Parish by its pastor, Salvatorian Fr. Bill Remmel. The parish provides the students with a place to stay during their border excursions.

Guardado wanted experience in a parish, and with his citizenship in hand, “I didn’t have to be afraid of the border anymore.” Now he takes local delegations, including people from the parish and ecumenical groups, to the border and develops education programs on border issues and other social justice matters, relying heavily on papal documents and statements of the U.S. bishops.

'I didn't have to be afraid of the border anymore'

Immigration and the Church: a new blog