Immigrant detention to be revamped 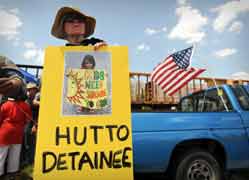 WASHINGTON -- Immigration and Customs Enforcement will no longer detain families at a much-criticized former medium-security prison in Texas and will take other steps to make immigrant detention more appropriate for the noncriminals the agency currently holds in jails and prisons.

John Morton, assistant secretary at the Department of Homeland Security in charge of ICE, said in an Aug. 6 teleconference that families awaiting deportation or other resolution of their immigration cases would either be held at a much smaller, less jaillike Pennsylvania detention center or released with a system of remote monitoring.

Morton also announced other changes, including the creation of an office to design a new system for civil detention -- as opposed to the current one based upon the penal system -- and another office for detention oversight. He also will hire an expert in health care administration and 23 new federal managers for a detention system that is currently operated largely by nongovernment contractors.

He said the process would begin immediately to move families out of the T. Don Hutto Family Residential Facility in Taylor, Texas, and into another more homelike detention center or into another type of monitoring. Hutto, which is about 30 miles from Austin, will continue to be used to house women detainees, he added.

Morton emphasized that ICE would continue to detain "on a large scale" people who "are here unlawfully and who pose a serious risk of flight or danger to others or to themselves."

Conditions at Hutto prompted a 2007 lawsuit and ongoing complaints that it is an unsuitable environment in which to house children. Hutto houses families in cells, with provisions for children to attend school on-site year-round.

Several reports released in July reinforced a growing chorus of calls to change the way the United States detains immigrants, including the closing of Hutto.

With more than 33,000 people in immigration detention on any given day, up from 10,000 a little more than a decade ago, the federal office of ICE oversees a range of types of detention.

From county jails to a former nursing home and private prisons, like Hutto, people await resolution of their applications for asylum and other types of immigration adjudications. The conditions in the facilities vary widely, from stark prisonlike cells to relatively unstructured community living at a second family detention center in a former nursing home in Pennsylvania.

In July, separate reports were released by a court-appointed monitor for Hutto and by a Louisiana civil rights group about conditions at a privately run immigration lockup in Basile, La. A third report by the National Immigration Law Center contained extensive criticism about conditions at detention centers around the country, including what it called violations of civil rights.

Morton's announcement of changes was welcomed by those who have been monitoring ICE detention conditions.

"We are overjoyed that years of advocacy and litigation finally resulted in the federal government acknowledging that housing young immigrant children in a medium-security prison like Hutto is not only inhumane, it is un-American," said a statement from Lisa Graybill, legal director of the American Civil Liberties Union of Texas, which sued ICE over Hutto conditions in 2007.

"Yet this victory does not eclipse the sad reality that the federal government continues to spend hundreds of thousands of dollars on immigration detention annually, when there are far less costly, more humane alternatives," she said.

Ali Noorani, director of the National Immigration Forum, said Morton's announcement "comes as a welcome shift in tone and substance" that he hopes means the Obama administration is moving ahead with plans for comprehensive reform of "a broad range of outdated laws, unenforceable programs, inflexible rules and ineffective or nonexistent monitoring and accountability that need immediate attention."

In his statement, Noorani said the announcement marks progress "on one of the most glaring emergencies" of a dysfunctional immigration system -- the "national embarrassment" of detention conditions.

"No modern, developed nation should tolerate the conditions under which we have jailed hundreds of thousands of families and individuals -- conditions that have proven life-threatening and fatal in far too many cases," he said.

Catholic News Service did not receive responses to several queries to ICE related to Hutto and the recent reports critical of detention policies; the queries were made prior to the Aug. 6 announcement, apparently in the works at the time of the requests.

CNS did receive a brief statement from ICE about the National Immigration Law Center's report, noting that it was based on data that preceded recent changes in ICE operations and that there was an ongoing review of detention practices.

In Texas, activists have been holding regular rallies at Hutto, with participants from churches, religious orders, faith-based groups and civil rights organizations. At one such event marking World Refugee Day June 20, more than a dozen speakers focused on the slogan "free the children."

"These children have done nothing wrong," Jose Orta, a Taylor resident and one of the organizers of the rallies, told CNS. "The children are being punished for the sins of their fathers. But people fail to realize that a lot of these detainees are just seeking amnesty."

The ACLU argued in U.S. District Court in Pennsylvania Aug. 4 that two lawful permanent residents had been wrongly detained for two years and for 11 months, respectively, while their immigration cases were pending.

"We don't live in a country that has unfettered authority to imprison people without hearings for as long as it takes to decide their cases," said a statement from Judy Rabinovitz, deputy director of the ACLU Immigrants' Rights Project, who was arguing the Pennsylvania case.

Elsewhere, detainees at the South Louisiana Correctional Center in Basile were reported to be waging a series of hunger strikes to protest conditions ranging from vermin in the cells to lack of medical care and the inability to contact family or attorneys, according to a July 28 report by the New Orleans Workers' Center for Racial Justice.

During the Aug. 6 teleconference, Morton said he was told that as of the previous evening there were no hunger strikes at the Basile center.

At the 350 or so facilities holding people for ICE around the country, some detainees are eventually deported; others are released with some form of legal residency, employment or visitor status.

Being in the country illegally is not a crime but is a violation of civil code, so people facing immigration charges are not entitled to legal representation if they can't afford it themselves. Nor does immigrant detention fall under regulations for prisons, or, in the case of family detention, the kinds of state licensing required for foster care or youth detention.

ICE has its own detention standards, including provisions for how children are to be treated when they are held with their parents in places such as Hutto.

News reports in the last few years have pointed out other significant problems at detention centers; for example, a March 2008 Washington Post series examined the deaths of 83 detainees over the previous five years.

Immigrant detention to be revamped