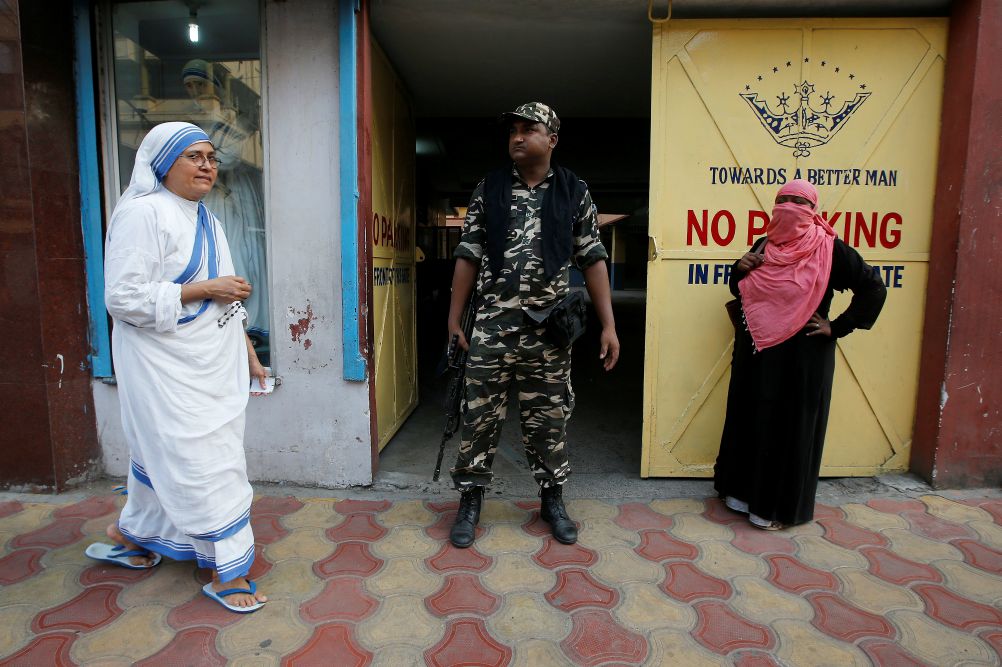 A member of the Missionaries of Charity, left, approaches a polling station during the final phase of general elections in Kolkata, India, May 19. (CNS/Reuters/Rupak De Chowdhuri)

Indian Prime Minister Narendra Modi's recent visit to the United States was greeted with a lack of enthusiasm from Christian groups aware of the rising violence against religious minorities in India fueled by the government's Hindu nationalist ideology.

While most reported cases of persecution are against the country's Muslim population, Christians have also come under attack. Jesuit Fr. Stanislaus Alla, theologian and professor at the Vidyajyoti College of Theology in Delhi, told NCR that the church in India was "paying the price for standing up for human rights." Alla was on a trip to the United States to present a paper on public health in South Asia.

When India's Hindu nationalist party, the BJP (Bharatiya Janata Party), declared victory for the second time in the general elections this year, a sense of unease engulfed the country's minority communities, who make up 18.2% of the country's population. Since 2014, under Modi's watch, religious persecution rose.

Christians in India have been active contributors to its education system. But in an atmosphere of growing right-wing fundamentalism, Catholic educational institutions have come under attack. They often face criticism and are accused of proselytism.

State level anti-conversion laws have been enacted to regulate conversions to other religions. These laws are now used to harass Christians, and "divide and polarize" people, said Alla. 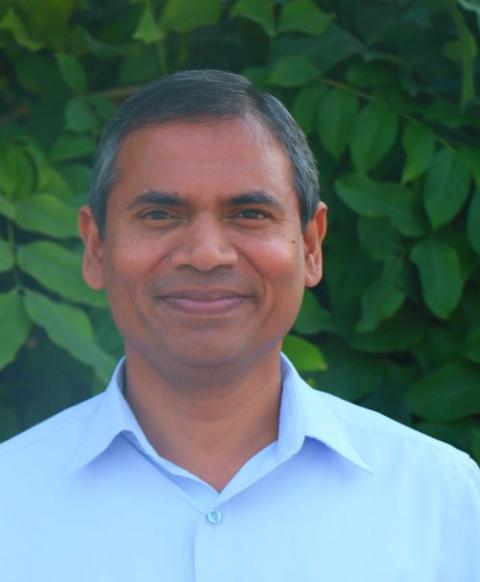 In the past few years, Christians in the country's Hindi heartland have been facing a series of attacks from Hindu extremists. More recently, outright violence has taken a backseat, and coordinated efforts are in place to shut down institutions. These efforts, said Alla, are happening because of the church's works in the area of human rights. Priests, nuns and laypeople who work in human rights are looked upon as "people who upset the status quo. The industries, landowners and government don't like that."

A recent example is the police raid conducted at the home of Jesuit Fr. Stan Swamy, a prominent human rights activist. Swamy, a critic of the government, has been an advocate of indigenous people undergoing trials who he said were falsely accused and imprisoned for protesting violations of their constitutional rights.

Alla said that it's Swamy's "intellectual approach and grassroot-level advocacy," that upsets the powerful. "That's the price one pays. And he [Swamy] has been an activist for decades."

However, Alla is quick to dismiss the idea that the current BJP government is particularly harsh on Christian minorities. "To be fair, Christians have suffered under other political parties as well. And it's not just this government [BJP]." He cities examples of missionaries being deported from India during the 1960s and '70s under secular Congress Party rule.

He doesn't deny that the present situation is a lot "different and difficult." With the BJP government's implicit support of its fringe elements, lynchings against minorities in India, especially Muslims, have increased drastically since Modi came into power for the second time. Data shows that 90% of religious hate crimes in India in the past decade have occurred under the Modi government. In most cases, despite overwhelming evidence, the accused have walked free.

"The fear today is, in case of attacks against Christians, the accused will not be held accountable. They can walk away freely. Across the country, people [minorities] are wondering if the state will protect them. Of course, the PM himself speaks often about protecting minority rights (but is not honoring their rights)," he said. 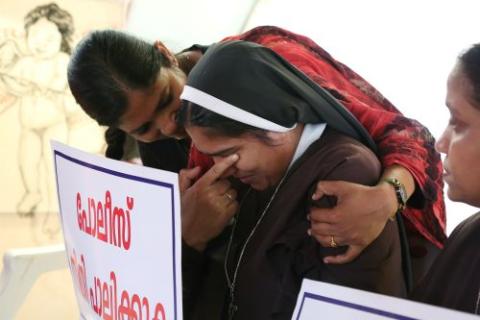 A woman religious is consoled during a Sept. 13, 2018, protest in Cochin, India, demanding justice after a nun accused Bishop Franco Mulakkal of Jalandhar of raping her. (CNS/Reuters/
Sivaram V)

Church leaders have been measured in their response. They've often reached out to Modi in an effort to build bridges. However, the BJP has accused the church for being anti-Modi and encouraging Catholics to vote along communal lines. Though the church is supposed to be apolitical, there are times when priests do make their political leanings public, said Alla.

"Democracy is a spiritual matter, as is electing a good leader. Letters from a diocese to its congregation, during the time of general elections, indicate values we need to remember before voting. Sometimes these letters might indicate that certain parties are not good for the community," he said.

Alla said the church cares most about protection of minority and constitutional rights.

External factors aside, the Catholic community in India is also besieged by internal issues that have rocked the church in the past few years. The most was the public protest by nuns in Kerala against Bishop Franco Mulakkal, accused of raping a nun. The Missionaries of Jesus flouted the country's anti-rape laws and publicly released the picture of the survivor, causing a massive public uproar. The church was criticized for its inaction against Mulakkal, despite a written complaint by the survivor.

"It took a long time for the #MeToo movement to reach the church in India," said Alla. Many within the church, he said, consider such issues as "internal matters" and choose to resolve it without going to the police. "If a priest or bishop is involved, the first instinct is to protect them. We also suffer from 'minority persecution syndrome.' Since we are a minority in India, we tend to not let issues blow up. And that has backfired badly." 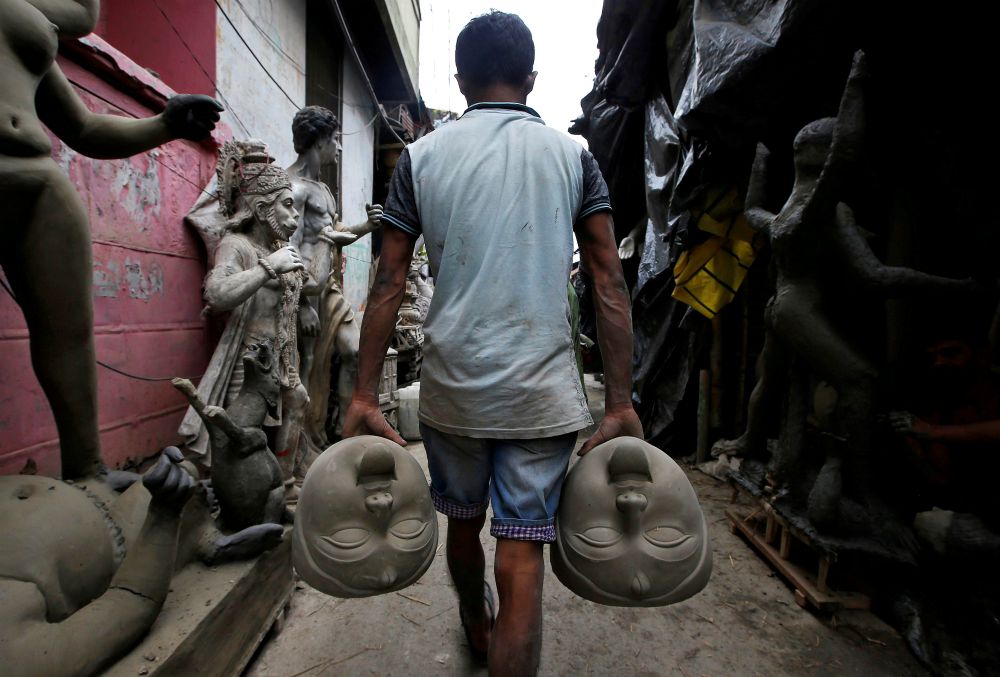 The case polarized the community. While many felt the nuns shouldn't have protested publicly, others called for introspection and transparency. "I think the discourse this case has generated is big. People across the country, especially Catholics, have been discussing the role and dignity of women in the church. And I think that's a huge step," he said.

With cases of clerical sex abuse in India making headlines, the church has also come under fire for protecting the institution and victim-blaming. "We are still in the cover-up and denial mode. Things aren't transparent. We are not ready yet, as a church, to open our eyes and see what's happening. We need to be accountable," said Alla.

Although there are child protection policies within the church in India, there is a reluctance to implement them. "The draft [child protection policy] is at the CBCI [Catholic Bishop's Conference of India] level, but again the bishops and superiors have to implement it, and not many are serious about doing so. They always want to 'manage' things within the church. And it's this attitude that has caused problems for us."