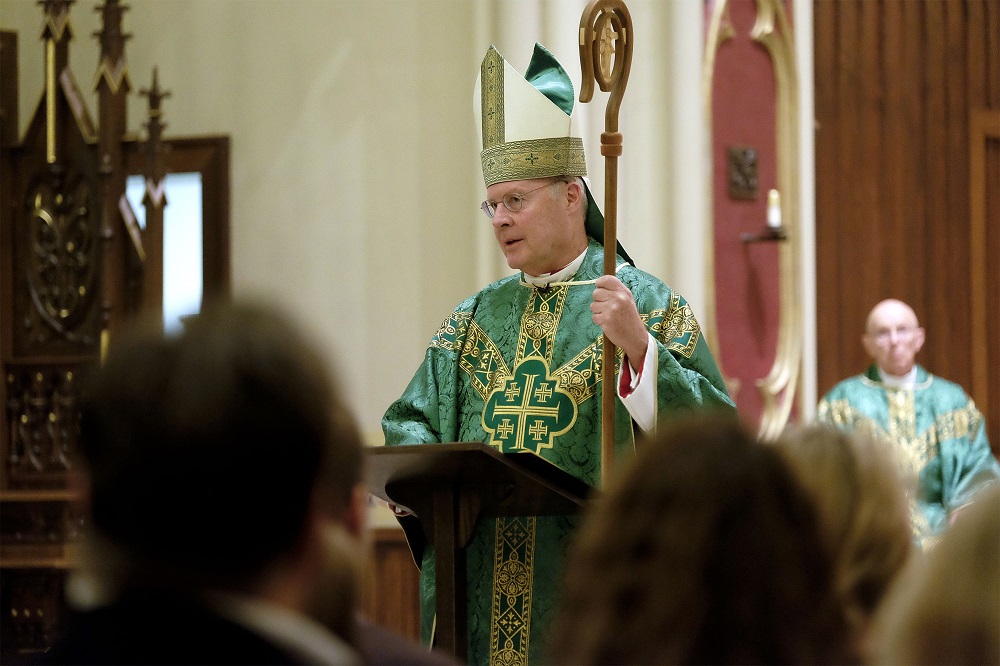 Bishop R. Walker Nickless of Sioux City, Iowa, pictured in a Jan. 30, 2016, photo, admitted it was "with a heavy and sad heart" he was reporting that some priests and bishops have abused the grace and beauty of the priesthood, "sexually abusing innocent children among us." (CNS photo/Jerry L. Mennenga, Catholic Globe)

Bishop R. Walker Nickless of Sioux City admitted it was "with a heavy and sad heart" he was reporting that some priests and bishops have abused the grace and beauty of the priesthood, "sexually abusing innocent children among us."

"We are determined to demonstrate, through action, that we are committed to transparency, accountability and helping survivors heal," he said.
"I believe the Lord compels us to shine a light on this darkness so we can heal together and send a clear message to victims: 'We believe you and care about you,' " he stated during a Feb. 25 news conference at the Central Catholic Offices in Sioux City.
"To all victims of such abuse, as well as the advocates and supporters of survivors, I am profoundly sorry for the suffering you have endured," the bishop added.
"However, as abuse survivors and their advocates have pointed out, apologies are not enough," he said. "There is no remedy for our church's past failure to protect our members — especially our children, who are least able to defend themselves."
The Diocesan Review Board created the list of 28 names of priests credibly accused of the sexual abuse of minors. The members reviewed the files of more than 500 diocesan and religious order priests since the diocese was formed in 1902.
The board is an independent group of seven voting members that investigates any allegations of clergy misconduct in the Diocese of Sioux City, which covers 24 counties in northwest Iowa. The priests named have not necessarily been charged or convicted in a civil or criminal case, but all cases have been referred to proper authorities.
Board member Mark Prosser, police chief for Storm Lake, Iowa, explained the board reviewed allegations that were filed by victims.
"We looked at any priests, where there may have been a report or letter in his file," he said. "A group, led by the diocese's law firm, reviewed every file dating back to 1902."
Accusations against priests not involving a minor were not included on the list, Prosser noted. Priests with allegations of the sexual abuse of minors that the board determined to be "within the realm of possibility" — one of the most expansive definitions used by any diocese — were included.
"The board identified 29 priests," he said. "However, the list includes the names of 28 priests, because the diocese received notification that one priest has appealed to Rome; therefore, his name is being withheld pending resolution from the Vatican."
Prosser outlined some key facts surrounding the list:
Fr. Brad Pelzel, vicar general of the diocese, stated much has changed in the way the Catholic Church handles an allegation of child sexual abuse or misconduct by a priest.
"First, all allegations are immediately reported to local authorities so they can investigate," he said. "The allegations are shared with the review board for its independent investigation. Their findings are then given to Bishop Nickless."
Most important, Pelzel pointed out, is the comprehensive process in place to keep children of the diocese safe.
"These measures have been in place since 2002 and continue to be updated," he said, referring to the U.S. Conference of Catholic Bishops' "Charter for the Protection of Children and Young People," commonly referred to as the "Dallas Charter."

Prior to the news conference, Nickless met with clergy of the diocese Feb. 21 to explain the release of names of priests credibly accused of the sexual abuse of minors.

"I'll be honest, I was very nervous and stressed going into the meeting on Thursday," said Fr. Craig Collison, pastor of Resurrection of Our Lord Church, Pocahontas and Our Lady of Good Counsel Church in Fonda.

The priest also serves as chairman of the priests' council of the diocese, which had met the week before.

Collison explained priests at the council meeting had a lot of good discussion and, despite some frustration and "low confidence" felt at the start of the day, those in attendance reported that they felt much "more positive" in dealing with questions from parishioners and, potentially, from members of the press.

Although weather affected Mass attendance the weekend of Feb. 23-24 with many churches canceling services, a letter from Nickless outlining the release of the list of names was handed out to those in attendance.

"Receiving the personal letter from Bishop Nickless was not able to be as effective as with normal Mass attendance," Collison acknowledged. "We will find other ways to effectively get the information out to our parishioners."

While the news conference was taking place, members of the chancery staff gathered for a time of prayer and adoration in the Central Catholic Offices chapel.

"Given what is ahead, time in prayer and adoration is essential," stated Fred Shellabarger, director of evangelization and discipleship. "Every hour on the hour, we prayed the novena for clergy, the prayer for victims and finally, the Divine Mercy Chaplet. We concluded with the Litany of the Sacred Heart at 4:20 p.m."

Nickless will celebrate an evening Mass of renewal Feb. 28 at the Cathedral of the Epiphany in Sioux City. Concelebrants will be Sioux City priests. Other churches in the diocese have been asked to celebrate their own renewal Masses, to pray for the victims of clergy abuse, to pray for forgiveness and to rebuild trust.

Nickless, who has served the diocese since 2006, renewed his plea for anyone who has been harmed by an agent of the church to come forward, emphasizing "transparency, accountability and helping survivors heal."

"We encourage all victims of abuse or misconduct to contact civil authorities and then our victims assistance coordinator, use the resources available through our diocese and help bring offenders to justice."