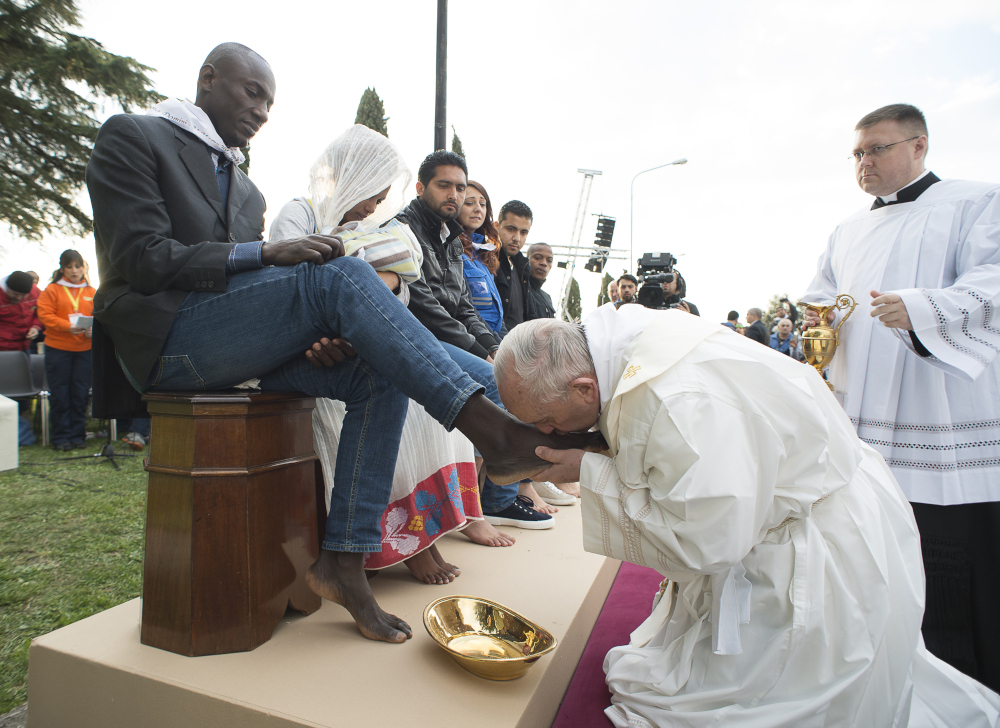 Pope Francis kisses the foot of a refugee during Holy Thursday Mass of the Lord's Supper at the Center for Asylum Seekers in Castelnuovo di Porto, about 15 miles north of Rome March 24, 2016. The pope washed and kissed the feet of refugees, including Muslims, Hindus and Copts. (CNS photo/L'Osservatore Romano, handout)

Christian leaders, local government officials and humanitarian organizations raised a cry in late January after Italy's anti-immigration interior minister ordered the closure of the Center for Asylum Seekers where Pope Francis celebrated Holy Thursday Mass in 2016 and washed the feet of refugees.

The first 30 asylum-seekers were transferred Jan. 22 from the center at Castelnuovo di Porto, about 15 miles north of Rome.

"Lives frayed once again. Souls, now with bags on their backs, treated like postal packages," is how the Italian bishops' daily newspaper, Avvenire, described the scene.

Drawing attention to the refugee situation in Italy, Pope Francis met early Jan. 23 with young refugees before leaving the Vatican to fly to Panama for World Youth Day. The young men and women are being assisted by the Jesuit Refugee Service's Centro Astalli in Rome. No mention was made of Castelnuovo.

Matteo Salvini, Italy's interior minister and vice prime minister, tweeted that "we are dismantling the business" of refugee welcome and assistance and that the protests over what was happening at Castelnuovo demonstrate how special interests and "a lot of money" are at stake.

The center at Castelnuovo is run by Auxilium, a cooperative founded by university students in 1999 to provide social assistance and health care to the elderly and people with disabilities. They expanded their work in 2007 to assisting migrants and refugees, using government funding and volunteers to offer initial shelter and health care, but also psychological support, language lessons and job training.

Before the dismantling of the Castelnuovo structure began, it was home to 535 people -- 401 men, 120 women and 14 children, who were enrolled in local Italian schools.

Salvini said the center will be closed by Jan. 31 and all the residents will be transferred to different regions of Italy. As of Jan. 23, though, neither the residents nor the media were told exactly where the asylum-seekers would be living.

Bishop Gino Reali of Porto-Santa Rufina, which includes Castelnuovo, told SIR, the Italian bishops' news agency, "It seems absurd to me to interrupt positive integration projects that have been underway with the participation of so many citizens and volunteers from the diocese."

Even more, he said, "the method of transferring them does not seem dignified for women, men and children who have such dramatic stories behind them. What kind of future are we offering these people?"

Riccardo Travaglini, the mayor of Castelnuovo, told the magazine Famiglia Cristiana, "Our community has been able to welcome and integrate the center's guests, which is why it is incomprehensible that they are closing something that has proven it works. Additionally, everything was done in a rush without any agreement. And what will happen to the dozens of employees?"

Auxilium said about 120 people will lose their jobs if the center closes.

While the asylum-seekers were required to live at the center while their requests for refugee status were being heard or appealed, they could leave during the day and could get jobs or go to school.

Catholic and Protestant leaders in Italy issued a joint statement Jan. 22 urging a collaborative approach to immigration and a calming of rhetoric on an issue that has been very divisive in Italy.

"The superficial and repetitive rhetoric used to discuss the theme of global migration pains and worries us," the leaders said, particularly because behind the statistics are "men, women and children whose basic rights are being denied, both in the countries they are fleeing as well as in the countries of transit, like Libya, where they end up in detention camps where people struggle to survive."