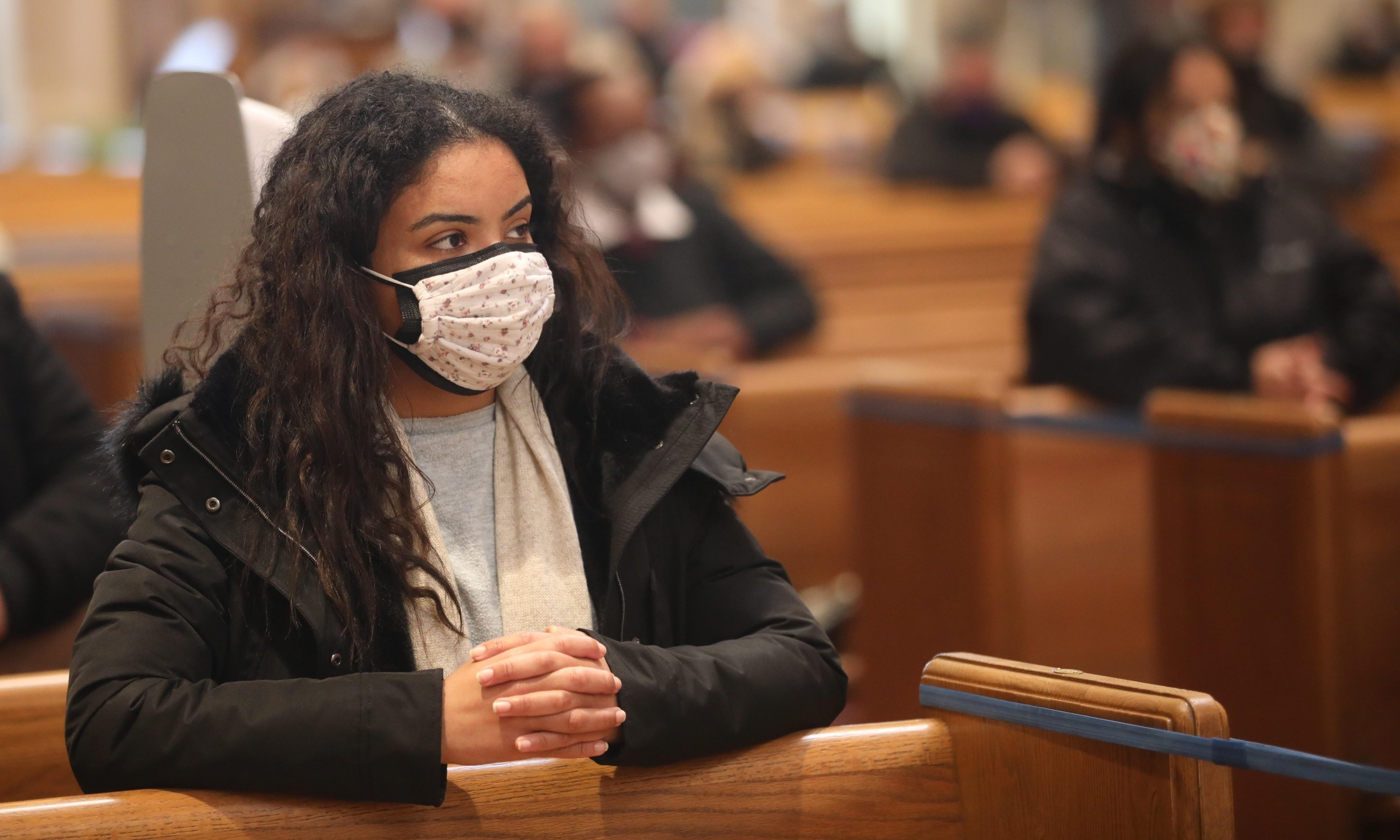 A woman prays during Ash Wednesday Mass at the Cathedral of St. Matthew the Apostle in Washington Feb. 17, 2021, amid the coronavirus pandemic. (CNS photo/Catholic Standard/Andrew Biraj)

The ruling by Judge Trevor N. McFadden was effective immediately, meaning houses of worship are no longer bound by caps on congregation size.

The ruling noted that with Holy Week and Easter approaching, the Catholic archbishop of Washington sought emergency relief from these regulations under the First Amendment and the Religious Freedom Restoration Act.

"The District contends that its restrictions on houses of worship are lawful and indeed necessary to fight the COVID-19 pandemic," McFadden wrote. "Though the court acknowledges the District's interest in stemming the spread of the virus, it finds that the archdiocese is entitled to relief."

The Archdiocese of Washington said in a statement: "We are pleased with the court's ruling that the District's 25% (or) 250-person capacity limits on religious services are unconstitutional as applied to Catholic churches in the District of Columbia."

"This ruling enables us to make the sacraments more fully available to our faithful in time for Holy Week, Easter and beyond," it said. "In our Catholic churches, we will continue to abide by our own safety protocols of social distancing, masking, cleaning and other safety precautions to ensure safe access to worship while we also continue to broadcast our worship services online."

In a March 26 email to priests in the archdiocese, Fr. Daniel Carson, vicar general and moderator of the curia, noted McFadden's ruling was effective immediately and "our churches in the District are no longer bound by either the 25% or the 250-person capacity limit."

Carson told the priests that the archdiocese's guidelines for the public celebration of Mass during the pandemic, first issued in May 2020 and updated that October, remain in effect.

Those guidelines require strict safety protocols, including mandatory social distancing, mandatory mask wearing, hand sanitizing upon entering the church, and for pews and other church surfaces to be regularly and thoroughly disinfected.

His email included a link to D.C. Mayor Muriel Bowser's March 17 executive order, which extends her declaration of a public health emergency through May 20.

In its section on places of worship, Bowser's order — besides including the now-struck down capacity limits of 25% or 250 worshippers — also encourages virtual services, especially for those who have not yet been fully vaccinated; requires that places of worship must use a reservation system or other means to ensure there will not be crowding; and says household members may be seated as a group, but each group must be at least 6 feet apart from others.

Carson's email pointed out that "the District's requirements include no crowding inside or outside of churches, cooperation in the District's contact tracing efforts, masking, social distancing, wellness checks for Mass leaders and other health and safety protocols that are consistent with the archdiocese's own guidelines."

In a Dec. 16 executive order, Bowser modified her earlier cap of allowing only 50 people at churches to 25% or 250 people and established those same limits for other businesses and venues. The modification followed the settlement of an earlier lawsuit brought by the archdiocese over a 50-person cap.

Considering Holy Week and Easter would be fast approaching, "we asked to be treated on par with big box stores, supermarkets, and other essential businesses, and we have proven that we can worship in a safe and responsible manner," said Chris Anzidei, the archdiocese's general counsel.

He said the court "finds the 250-person cap particularly troubling."

"It does not appear that this restriction was narrowly tailored to stem the tide of the virus. As the District's order shows, it was designed simply to ensure ‘parity' between houses of worship and restaurants," McFadden said.

The District also admitted during oral arguments that "there have been no reported outbreaks from attendance at the archdiocese's Masses," the judge said.

McFadden also noted the archdiocese has self-imposed restrictions beyond what the District has required and continues to adhere to "extensive precautions" to safeguard congregants and limit the size of gatherings.