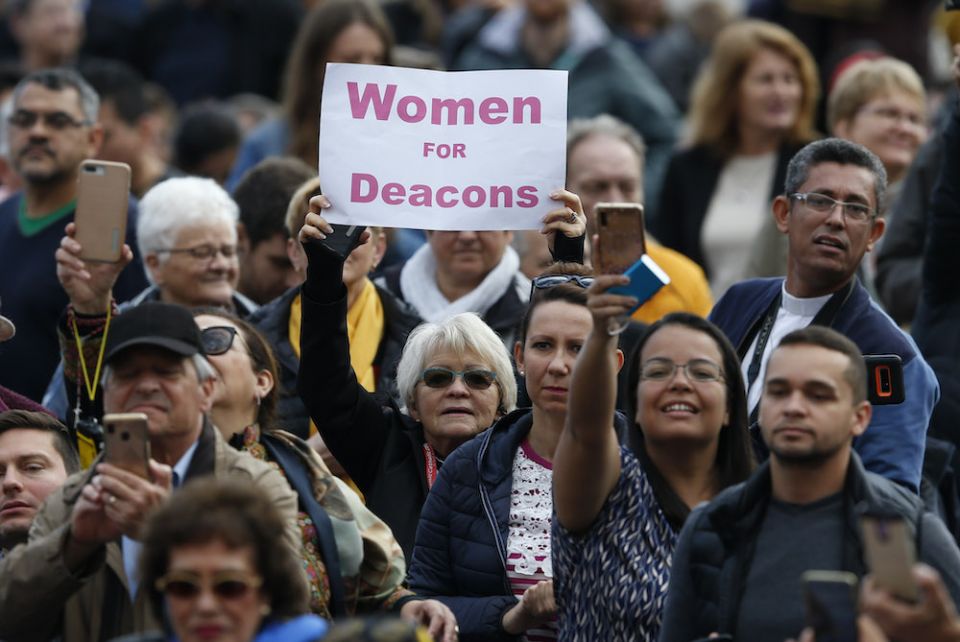 First, the bad news: two officials of the Congregation for the Doctrine of the Faith have told me, in person, at lunch, that women cannot be ordained deacons because women cannot image Christ.

The good news: At least one no longer works there. I am not sure about the other.

Now, the London Catholic newsweekly The Tablet reports that the new commission for the study of women in the diaconate will meet for one week in Rome, beginning Sept. 13. One may assume the meetings will take place in the CDF's vaulted meeting room. The coming commission constitutes the fourth discussion group in recent history to discuss women deacons there.

Two subcommittees of the CDF's International Theological Commission reviewed the question over 10 years. In 1997, the first subcommittee reportedly found no problem with restoring women to the ordained diaconate. However, the CDF prefect at the time, Cardinal Joseph Ratzinger, refused to promulgate their report. He named a new subcommittee, which produced a much longer report five years later. That 2002 report concluded that, while male and female deacons did not perform the same tasks and duties, there is a clear distinction between the diaconate and the priesthood. Therefore, they wrote, the question is up to the magisterium to decide.

So, the question was left to Pope John Paul II, who did nothing. In 2005*, he was succeeded by the CDF prefect who dismissed the first ITC subcommittee's original findings. The former Cardinal Ratzinger, then Pope Benedict XVI, did not further investigate women in the diaconate. However, in 2009 he codified the catechism's teaching, which is consistent with the conciliar teaching of the Second Vatican Council. Now canon law affirms the diaconate is not the priesthood.

In 2016, at the request International Union of Superiors General (UISG), Pope Francis named a commission to study the diaconate of women. It completed work in June 2018. Nearly one year later, in May 2019, Francis gave a portion of the commission report to the UISG leadership, saying they could do with it what they wished, and that he had more commission documents they could request. Months later, the UISG president affirmed she had received the commission's historical analysis. It remains unknown if the UISG ever requested the remaining papers the pope offered.

As for history, no one disputes the documented facts about women deacons in the West up to the 12th century, and longer in the East. They were ordained with the same liturgical ceremonies as male deacons: by the bishop, during Mass, in the presence of clergy, through the imposition of hands and by the invocation of the Holy Spirit. They self-communicated from the chalice. The bishop placed a stole around their necks and called them deacons.

So now there is a fourth group scheduled to meet in Rome. Who will they meet there? What will they study?

If women are no longer forbidden from being present inside the sanctuary, then they need not be restricted from the ceremonial tasks and duties of the diaconate.

It appears the only CDF official involved with the new commission is its secretary, Fr. Dennis Dupont-Fauville, who once led the diaconate program of the Archdiocese of Paris. The commission's president is the 73-year-old archbishop of L'Aquila, Italy, Cardinal Giuseppe Petrocchi, named cardinal in 2018 and, since then, appointed to the Commission for Vatican City State, the Congregations for Education and for Saints, and the Council for the Economy.

According to NCR former Vatican correspondent Josh McElwee, the majority of the new commission's members do not appear to have published scholarship on women deacons. A few have written about the diaconate. One denies women deacons by connecting the diaconate with the priesthood. One belonged to the second ITC sub-commission. Two are deacons.

So, what will they talk about? It is known that on October 26, 2020, both Cardinal Petrocchi and Fr. Dupont-Fauville met with the pope. One can assume they received their marching orders then. When the pope spoke with the assembled UISG in 2016, he said he wanted to know what the women deacons of history did. Perhaps now he wants to know what deacons do today.

Given that Francis changed canon law to allow women to be installed as lectors and acolytes, thereby firmly allowing them to be near the sacred, perhaps he has asked what (if any) diaconal tasks are impossible for women.

That seems to be the central question. If women, like men, were once ordained as deacons, then what the church has done the church can do again. If women are no longer forbidden from being present inside the sanctuary, then they need not be restricted from the ceremonial tasks and duties of the diaconate.

But altar service is the least of it. The ministry of the diaconate is of the Word, the liturgy and charity. The deacon proclaims the Gospel in word and deed, living a life devoted to charity. Francis once recommended that deacons in effect get off the altar, and the view from his chair is the correct one. If the deacon lives a life devoted to the Gospel, he — and hopefully one day she —will proclaim the Gospel in word and deed.

Centuries ago, Pope Gelasius I was scandalized that women — presumably women deacons —were ministering at the altar. The synodal church seems to be moving in the direction of allowing women back there. Their presence at the Eucharist as deacons will symbolize their own dedication to the Gospel and that of the church to the larger question at hand. For until the church restores its own tradition, it will be caught in a morass of falsehoods growing from the single statement that women cannot image Christ.

*This article has been edited to correct a date.

Phyllis Zagano is senior research associate-in-residence at Hofstra University, in Hempstead, New York. Her most recent book is Women: Icons of Christ, and her other books include Women Deacons: Past, Present, Future. Study guides for the book, which is also published in Spanish, French and Portuguese, are available for free download at sites.hofstra.edu/phyllis-zagano/.