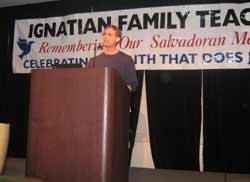 WASHINGTON -- "If we do not demand the best of our church, universities and our government, we've already abandoned a sincere search for justice," Ursuline Sr. Dianna Ortiz told attendees of this year's Ignatian Family Teach-In for Justice, an annual reunion of Jesuit social justice activists from universities, colleges, high schools, parishes and ministries across the nation.

After years of holding the Teach-In at the School of the Americas in Fort Benning, Ga., the event's organizers, the Ignatian Solidarity Network took advantage of this year's location at Georgetown University to have participants engage in direct advocacy with Congress and other policymakers.

About 1,200 people joined the Nov. 13-15 event. Two days of speeches and breakout groups on key issues culminated in a Monday morning send-off rally and public witness on Capitol Hill. In meetings with their local congressional representatives, students focused particularly on passage of the Dream Act and immigration reform, climate change legislation, and the closure of the School of Americas.

In her keynote speech Saturday night, Ortiz briefly referred to her abduction and torture by members of the Guatemalan military while serving as a missionary in 1989, but focused mainly on the Teach-In's call for activism and leadership, urging the young crowd to speak truth to power in spite of the costs. Ortiz is founder of the Torture Abolition and Survivors Support Coalition, a group dedicated to ending torture worldwide and supporting victims.

"The idea behind this is to build some political power here in D.C.," said Mike Schloss, the network's program director. "Pretty soon, people are going to know who the [Ignatian Solidarity Network] is, know what the Ignatian Family Teach-In is, in the halls of Congress, and pick up our phone calls and really work with us."

The weekend's theme was "Prophetic Lives: Caminando Juntos," drawing inspiration from the Jesuit martyrs killed for their work in El Salvador on Nov. 16, 1989. Speakers frequently referenced the martyrs to highlight the often-heavy sacrifices of social justice work and the anniversary of their deaths. Indeed, the Salvadorian martyrs have become an indispensable symbol of the movement.

"We know the path of justice requires sacrifice, but the legacy of martyrs tells us [that] the culture of fear and individualism isn't the whole story," said Jesuit Fr. Mark Ravizza of Santa Clara University. "It is a promise that if you truly pour out your life and have love for one another, though you may face suffering and death, in the end you will find life."

Many speakers emphasized the integral link between faith and justice, and the intimate connection between spirituality and activism.

St. Joseph Sr. Helen Prejean, renowned author of Dead Man Walking, an autobiographical account of her relationship with a death-row inmate, recounted growing up in Louisiana during the early years of the Civil Rights movement and her initial complacency as a nun.

"I wasn't awake. And it all happened around me. My whole spiritual life was about being close to Jesus, right. I studied. I was prayerful. I was a good nun, bona fide. I didn't get it about justice. I just didn't get it," Prejean told the crowd. "Waking up when you do wake up, you know that it's God waking you up."

Prejean was there on behalf of the Catholic Mobilizing Network, a group calling for the abolishment of capital punishment and restorative justice.

Catholic Mobilizing Network was one of the many diverse organizations that lined the hallway outside the conference's main ballroom with tables and pamphlets. The Jesuit community's wide array of concerns were well represented, from organizations committed to farm-worker justice and immigrant rights to peace groups, anti-poverty groups, and pro-life organizations.

The breakout groups, often led by representatives of those groups or by college students, demonstrated a similar diversity and a commitment to concrete political change on a whole slate of issues.

Following Sunday night's Mass, some participants attended a vigil for Colombian human rights victims, along with the Adiós Uribe coalition of Georgetown University activists in the campus' free speech zone of Red Square. Georgetown has seen several demonstrations this fall protesting the university's hiring as a visiting professor ex-Colombian President Álvaro Uribe, who has been linked to numerous alleged human rights abuses.

There was no mention in the official program of the host institution's lingering controversy, but Ortiz talked about Uribe's hiring in her Saturday night speech.

"I have nothing against Georgetown University. But is it an unequivocal voice for justice or does it prefer to seek well known names regardless of their past actions?" Ortiz asked. "How can one who so many have called a human rights violator be so welcomed by a Jesuit university, one that espouses humane values, truth and justice?"

In the end, though, no single issue took precedence. The weekend's main objective was to build a strong movement for the future. By informing high school and college students on the key issues of their time and constructing a broader network of activists, the Ignatian Solidarity Network hopes to show that the Jesuit peace and justice community is a force to be reckoned with.

Moving the teach-in from Fort Benning to Capitol Hill was, for many participants, a way of acting on the network's pledge to future growth.

Jesuit Fr. Donald MacMillan of Boston College, who has attended all but one of the twelve Teach-Ins, said that though it was a "difficult emotional move" to leave Georgia and his many friends involved at the School of the Americas vigil, the movement's demands are now being heard more directly. The challenge is to stick behind those demands after students return to their homes and college campuses.

"There's always a challenge, always a struggle. But struggle is a good word. That means there's life there. Nobody's sitting here being complacent," MacMillan said.

As the Ignatian Solidarity Network wrapped its first Teach-In in Washington, it now turns its attention toward its January Leadership Summit in San Francisco, the next step in the group's mission to train promising student leaders in the field of social justice.

[Cole Stangler is news editor of the Georgetown Voice, a weekly student newsmagazine at Georgetown University.]

Ministers mark anniversary of March on Washington for Jobs and Freedom