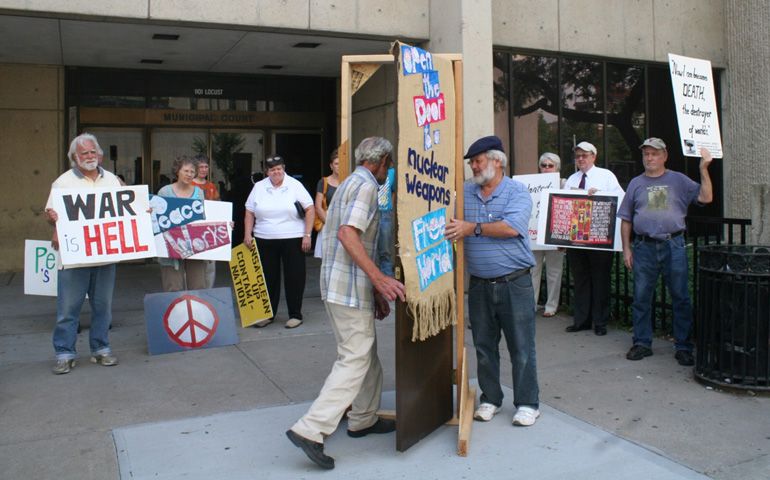 Kansas City, Mo. — Thirteen peace activists were sentenced Wednesday for trespassing on a nuclear weapons parts plant in a court hearing that quickly turned from routine to colorful: Two activists refused to pay their fines and demanded jail time, and the possibility of a rare jury trial was raised for five defendants.

Twenty-four PeaceWorks protesters were arrested July 13 after crossing the property line of the National Security Campus, also known as the Kansas City Plant, a new five-building facility where 85 percent of the non-nuclear parts for U.S. nuclear weapons will be made or procured, according to defense contractor Honeywell. The activists included priests, sisters and Catholic Workers, who were then randomly assigned to one of three sentencing hearings in Kansas City's municipal court.

Antone, who said in July he crossed the line mainly to support Kabat, pleaded guilty as a first-time offender. Kabat, who has been arrested twice before at the Kansas City Plant,  and Bichsel pleaded not guilty and requested a jury trial.

Three Kansas City activists, including protest organizer Jane Stoever, wife of Henry Stoever, also requested a jury trial. She said she decided to plead not guilty because she wants to share her nonviolent message with a jury of her peers.

The city prosecutor said Cordaro and Bloomer should be held in contempt of court, but Judge Anne J. LaBella balked at sending them to jail, saying, "It costs $68 a day to house and feed prisoners." The judge said she needed time to consider their request and ordered Cordaro and Bloomer to wait for her to process the 89 other cases on her docket.

In the gallery, defendant Georgia Walker, who pleaded not guilty, whispered to fellow activists, "How much bologna can you buy for $68?"

Nearly two hours later, LaBella offered to waive all fines for Bloomer if he would pay court costs of $34.50, perform 100 hours of community service and accept a suspended sentence of 180 days in jail. Bloomer refused.

"I see a problem paying any fines or fees to the court when the money could go to homeless services," he said.

LaBella told him good work comes out of court fees, offering as an example a special court for homeless people that she recently presided over.

When Cordaro took the stand and asked to make a statement, LaBella told him no.

"You pled guilty, so I sentence you," she said, adding she felt he did not respect her position as a judge.

LaBella then offered Cordaro the same deal she offered Bloomer. Cordaro replied, "I can't do that."

"You don't have a choice," LaBella said.

"This isn't a courtroom," he said. "It's a collections agency. From where we live at the Catholic Worker, the reality is so profound that the justice system is a war on the poor. That's why we refuse to pay any costs."

"Did you see all the people in my court today?" LaBella asked. She then talked about how many people the court helps and said the court is not a collections agency.

She then ordered Cordaro and Bloomer to return to court in a month to appear before Judge Elena M. Franco, who handled their previous case. (The two had been arrested before at the plant and refused to pay those court fees. They are in violation of probation.) Cordaro and Bloomer left the courthouse without processing any papers or paying any fees.

"The next time I come back to Kansas City will be for another action at KCP," Cordaro said after the proceeding.

Defendant Louis Rodemann, a member of the Christian Brothers, said he agreed with both Cordaro and LaBella but still chose to plead guilty, take community service and pay a fine. Rodemann spoke to NCR about his decades of volunteer work serving the poor at the Kansas City Catholic Worker as well as his resistance to the nuclear weapons plant in Kansas City since the early 1980s. Both issues are related, he said.

"Our country spends billions of dollars on war, and that money is taken away from the guests at our Catholic Worker house," he said.

Kelsey Schmidt, a 25-year-old local elementary school teacher, was one of the youngest defendants. With a degree in peace studies, she said she recently began contemplating civil disobedience.

"I felt like I was a lot of talk and not a lot of action," she told NCR. She also pleaded guilty, explaining with a smile: "My principal told me not to cross the line," so jail time is out of the question.

At the first hearing Aug. 26, four people were sentenced to community service: a Notre Dame sister, a Christian minister, a nurse and a social worker for the elderly. The final hearing will take place Oct. 7 and will include the case of Fr. Jerome Zawada. At that time, a trial date is expected to be set for those who pleaded not guilty.

The curse of cowardice; book illustrates influence of science and religion on cowardice-courage relationship

What does climate change demand of Catholic education?