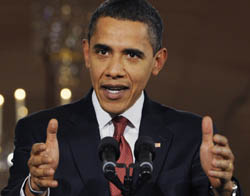 "Development work on the Reliable Replacement Warhead will cease, while continued work to improve the nuclear stockpile's safety, security, and reliability is enhanced with more expansive life extension programs," the budget document said.

"It’s dead and this is a very important development,” said John Isaacs, Executive Director of the Center for Arms Control and Non-Proliferation where his work focuses on national security issues. "This is a very positive sign."

Jane Stoever, a long-time Kansas City peace activist, in an email, called the move "an honest-to-God victory for those of us who've fought the nuclear weapons machine for so many years."

Isaacs said that the significance of the development was the ending of the spending and not the amount, which amounts to “tens of millions” and is a small portion of an estimated $52 billion spent on nuclear weapons related programs in fiscal year 2008, according to a report by the Carnegie Endowment.

Despite Isaacs’ pleasure, he cautioned: “We have seen other (nuclear weapons systems ) killed only to come back to life.”

The Reliable Reduction Warhead project envisions a new design for future nuclear weapons that can replace current stockpiles and can be developed without resuming nuclear testing.

It was launched under the administration of former President George W. Bush to study detailed design and costs. The Energy Department was seeking to start producing the weapons in 2012.

Meanwhile, Congress is in the process of approving the Fiscal Year 2009 Department of Energy budget – without funding for new nuclear weapons.
Just two weeks ago, Congress removed a billion dollars for nuclear weapons infrastructure that quietly made its way into the stimulus package.

It apparently remains uncertain whether the new administration will eventually provide money for a new generation of nuclear weapons. The Council for a Livable World, sister organization to the Center for Arms Control and Non-Proliferation, issued an alert Feb. 26, telling its members to stay vigilant.

“There is still a chance that the National Nuclear Security Administration, the government department that controls our nuclear weapons programs, could fund a similar program under a different name. We are continuing to monitor the issue closely, and will alert you when key moments arise for you to help influence this critical debate.”

The question of whether the plutonium and other nuclear warhead components suffer from aging has been a major topic of research at weapons laboratories in recent decades. One government study concluded in November 2006 that “most plutonium pits have a credible lifetime of at least 100 years.” The oldest pits currently in the US arsenal are still less than 50 years old.

The concept underlying the Reliable Replacement Warhead program is that the US weapons laboratories could design new nuclear weapons that are highly reliable and easy and safe to manufacture, monitor, and test.

Critics of the program believe it has nothing to do with making US weapons safer or more reliable, but is merely an excuse for designing new weapons and maintaining jobs at the weapons laboratories. They add the program is contrary to the “general and complete disarmament” of atomic weapons required by the Nuclear Non-Proliferation Treaty, which the U.S. has signed.

(Thomas C. Fox is NCR editor and can be reached at tfox@ncronline.org)