Activist nun: Change in the church comes from the bottom up 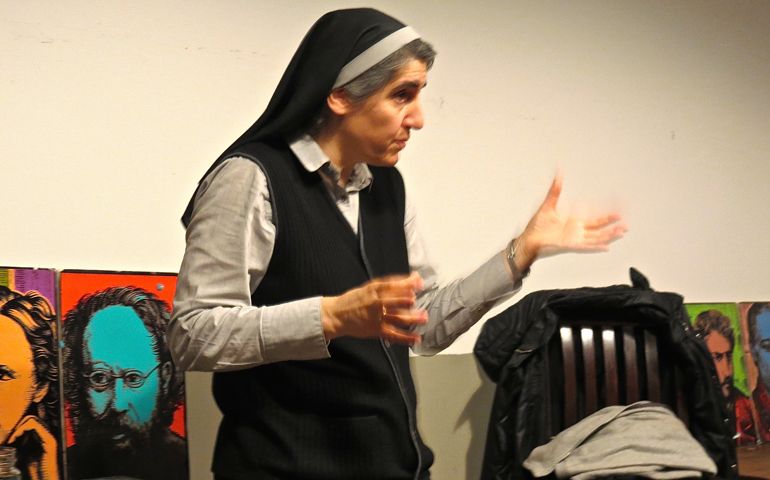 Baltimore — The image that surfaces when Sr. Teresa Forcades speaks is evocative of spiraling energy, bubbling in spirit, and of being on the ground with the needs of the people of God.

Forcades -- a Benedictine nun, activist, feminist theologian and physician from Catalonia in Spain -- and Francis -- a Jesuit pope from Argentina -- share a kindred vision of empowering the poor through nonviolence. Both understand the relationship between capitalism and poverty. Francis has denounced the "idolatry of money" and implored world leaders to assure all people "dignified work, education and healthcare." In a way, Forcades takes it further by advocating that the state must be challenged from the bottom up. The people must be the agents of change.

"When I talk about church, we talk about how the Gospel inspired us. There are many kinds of church, and I identify with the people at the bottom, at the base. Many people have a hope that the Catholic church might change because of the pope, but if you look at history, change comes from bottom up, not from top down," Forcades said to a room overflowing with "local radical activists" invited to her March 18 talk at Baltimore's Red Emma's, a bookstore coffeehouse.

Her friend, Vicente Navarro, professor of public policy at Pompeu Fabra University in Barcelona and at Johns Hopkins University, introduced her. "There are many parts to Teresa," he said.

Born in Barcelona in 1966, Forcades' parents sent her to a Catholic school.

"I was baptized, but I was not a religious person," she said. "I read the Gospels when I was 15 and I was impressed."

Her vision, she said, has also been shaped by liberation theologians Leonardo Boff and Gustavo Gutierrez as well as mystics Simone Weil and 13th-century Gertrude the Great of Helfta, who, it is said, served in roles reserved for male priests.

Forcades completed a residency in internal medicine from the University of Buffalo School of Medicine in 1995 and received a Master of Divinity from Harvard. In 1997, Forcades entered the Benedictines at their mountain monastery in Montserrat, Spain, after witnessing their support of gay Catholics. Forcades later earned doctorates in public health and theology.

Forcades highlighted Spain's economic crisis to the Baltimore audience. For example, the unemployment rate is 25 percent -- 50 percent for youth with or without a degree. One of every four children is malnourished. In 2011, the Spanish Constitution was changed to pay back the debt to the European Union.

"The needed money is a speculative movement that makes money off the poor," Forcades said. "The international bank makes these decisions and includes this intermediate element."

Forcades said she used to fight for poor countries in Latin America who had been under the same mechanism, neocolonialism. Now, in addition to Spain, her list includes northern Greece, Portugal and even Italy.

"It is important to talk about corruption of particular leaders but even more so [that] we have a system that allows people to make money off the backs of the workers, the poor."

"The EU money didn't come to help the families of those evicted from their homes or to help the unemployed but was instead given to the banks," Forcades said. "Like what happened in the U.S. when the banks were rescued, the people will have to pay the money back to the EU."

Because of the government's mishandling of the economic crisis, Forcades said the people came together to create the Catalan Constitution, what she refers to as "the walking process" to meet the needs of the people within its framework.

The focus of those who support the movement is not reform of the structure, but a rupture, she said. She cited an example from Iceland where an "austerity rescue" was said to be the answer. "Instead, the people removed the politicians," she said.

Forcades supports autonomy for Catalonia. She said she does not trust the church in Spain because of its ties to fascism and its alliance with the powers.

She said one major problem is apathy: Almost 40 percent of the people in Catalonia don't vote. The goal of the movement is to reach these people to appeal to their sense of social justice.

A year old in April, the movement has a website, a manifesto and a petition for people to sign.

The manifesto, which she wrote with "indignados" leader economist Arcadi Oliveres, includes the call for fair housing, expropriation of the banks and electric companies, and the need to eviscerate capitalism.

Another major tenant is nonviolence: Forcades said violence is used by reactionary forces, and "there is no place in our movement for an exclusionary type of nationalism."

Forcades said for positive social change to occur, the people must move to greater consciousness. Thus, it is essential to create a process in which the people are given the opportunity to be continuously involved in the political process. This means there is a need for continuous revolution.

What role does the church play in this process?

Her face saddened as she answered the question. Forcades said the church hierarchy in Spain remains silent.

"Anglican bishops in England, however, wrote a pastoral letter supporting the needs of the people as interpreted in the Gospels," she said.

She said she believes the Roman Catholic church must acknowledge aggiornamento, which means the church must open up the windows and accept change in line with the Second Vatican Council. Forcades suggested Francis might be an agent of change. However, she said it must be the people in the church who will promote the acceptance of contraception and an end to the church's homophobia and who become voices in the struggle for justice for women.

"We now have women priests with the people from the bottom up," Forcades said with a smile. "The people are ready."

[Janice Sevre-Duszynska is a Roman Catholic Womanpriest, peace and justice activist, and a retired teacher.]

Justice | Activist nun: Change in the church comes from the bottom up