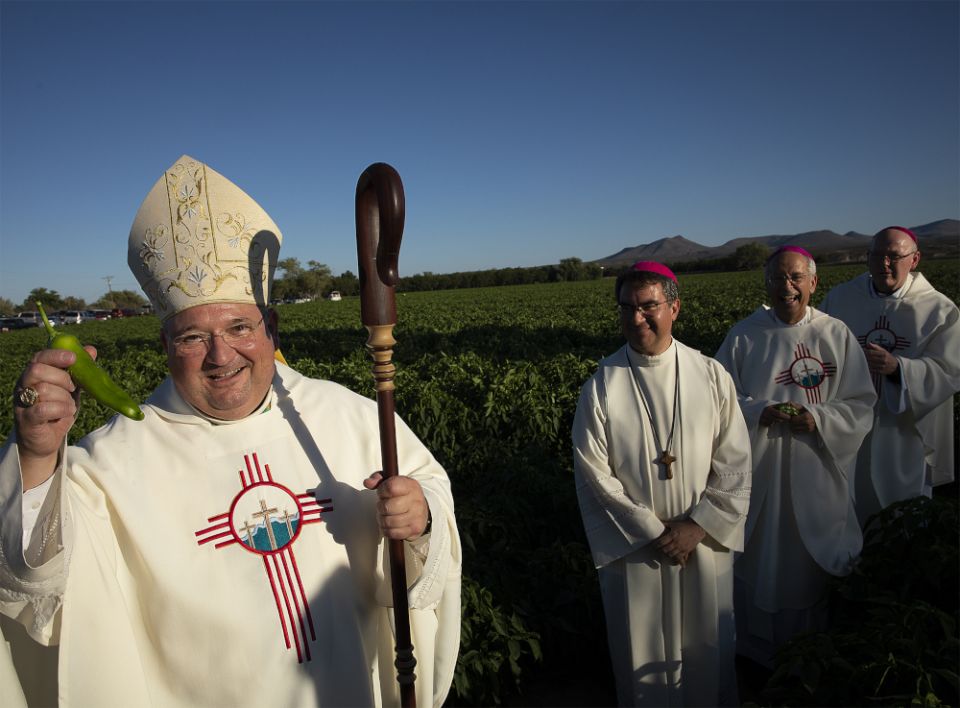 A group of U.S. Catholic bishops, along with a Vatican representative and other priests, celebrated Mass Sept. 26 next to a field of chili peppers with farmworkers and their families and other immigrants.

The faith leaders' visit came the same day the U.S. Department of State announced the Trump administration was capping refugee resettlement at a historic low of 18,000. The new limit only affects refugees applying for asylum in the U.S. from overseas, not at the border, but immigration advocates took it as another sign the nation is closing its doors to newcomers.

In New Mexico, the town's citizens welcomed the bishops -- as well as the women religious and other lay members of the Catholic Church who traveled with them -- with smiles, songs, dances and great amounts of homemade food from their famous product. But they also shared the difficult moments they recently faced when a group of migrants arrived in a nearby town and some townsfolk stepped in to help.

Not everyone in town was pleased and some parishioners at the local Catholic church spoke of being afraid of catching illnesses from them. Others worried about what their neighbors would think if they found out they were providing them with shelter.

"We had them hiding in our homes," Crystal Gonzales told the group, adding that it reminded her of what she had read as a sixth-grader in "The Diary of Anne Frank."

The tale was one of many stories of hardship and fear the group heard in a week of visits organized by the U.S. Conference of Catholic Bishops' Subcommittee on the Pastoral Care of Migrants, Refugees and Travelers.

The journey to hear the tales of immigrants -- leading up to the Sept. 29 World Day of Migrants and Refugees -- set a stark tone, detailing the lack of welcome, the closed doors many of the 70 million displaced people around the world are experiencing.

However, it also highlighted the work of the Catholic Church, through its organizations and parishes, and their role in providing comfort.

Deacon Carlos Luna and his wife, Maria, of Wenatchee, Washington, represented the Diocese of Yakima during the visit. Deacon Luna said it had been at times difficult to listen to the stories.

"I cried" listening to the tales of young women and their children stranded on the Mexico side of the border, alone and in a dangerous city, he said. "I'm a family man and I have daughters."

It pained him to think of his daughters and what would happen to them if they were faced with having to flee for their lives, he said. At the same time, he found hope in those stories because someone from the Catholic Church had stepped in to help.

It also deepened his resolve, he said, to do something once he returned home.

"We have to help them," he said in an interview with Catholic News Service Sept. 26. "My plan is to form consciences in the church. Some of us have gone through similar situations but have forgotten."

He said he and his wife had already been talking about what action they would take upon their return. Though they minister to migrants in Washington state's agricultural circles, they could find enough people to help, at least materially, some of the organizations that help migrants along the border, he said.

As Bishop Peter Baldacchino of Las Cruces, New Mexico, Bishop Oscar Cantu of San Jose, California, Bishop Mark Seitz of El Paso, Texas, and Bishop Brendan Cahill of Victoria, Texas, and Father Robert Stark, of the Vatican Section for Migrants and Refugees, met with the migrants in Hatch, the last major public event of the week, you wouldn't have guessed the emotions some of them were experiencing -- but they were there.

Cantu said he had felt some frustration, because there are humane solutions the U.S. can choose to help vulnerable migrants. He recalled a moment during the trip when he saw migrants and their children board buses headed back toward uncertain futures in Central America.

"You could see the disappointment in their faces, their postures, their expressions. They had built up hope in being able to find asylum in the United States and after a good amount of time of waiting, they were being sent back to their home countries," he said.

"It made me wonder what's going through their minds? Do they still have hope? How do they start over? How do they reintegrate? Will they still have a home to go to?" he continued. "It raised a lot of questions at a human level. Where are those persons spiritually what do they have to go back to?"

The bright spot was witnessing the "touch of humanity" members of the Catholic Church provide, he said, even in what seems like defeat.

"We can't solve all of the problems for people in their lives, but we can, at the very least, walk with them, let them know they're not alone," Cantu said. 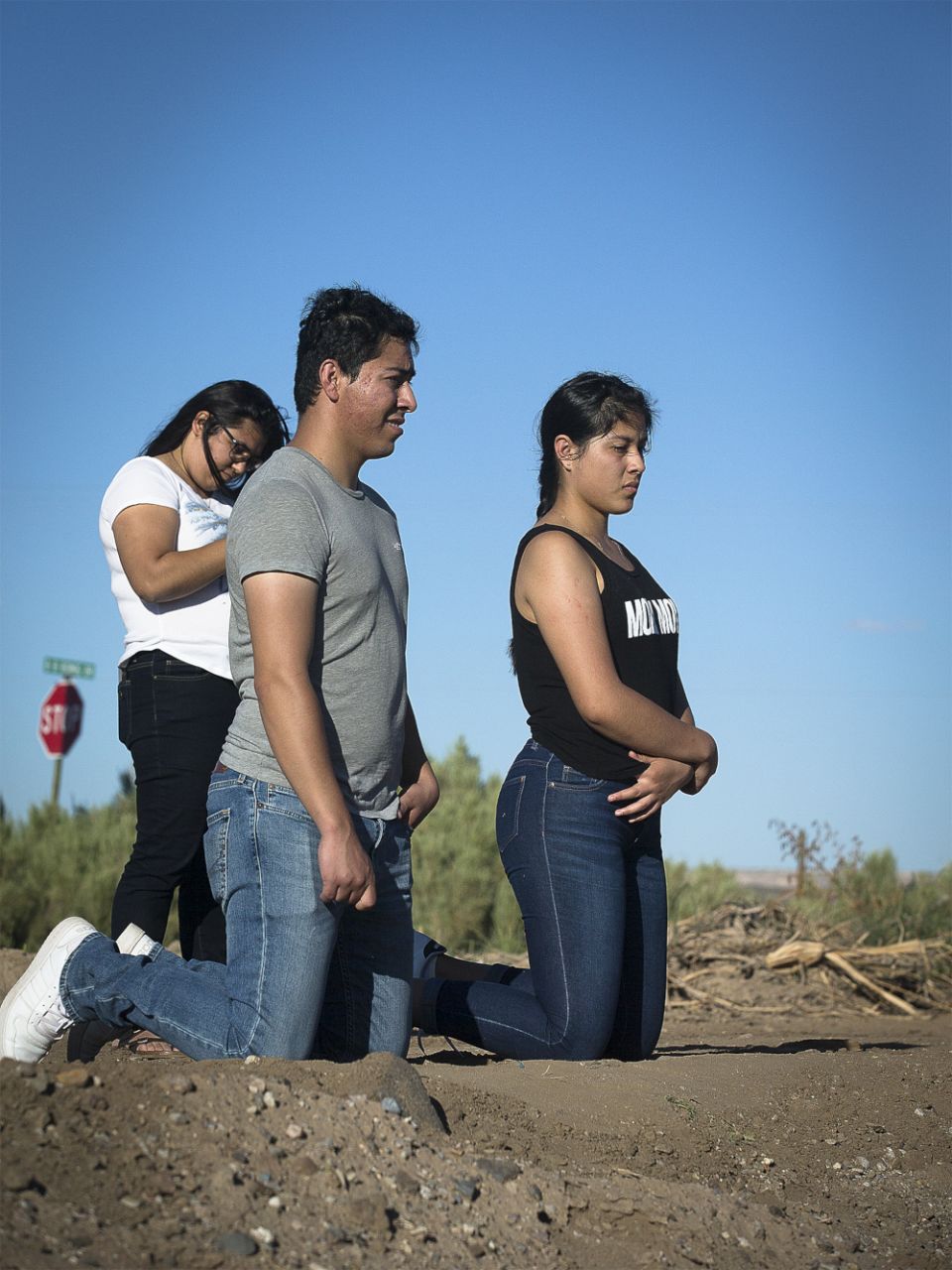 Migrant farmworkers kneel in prayer during an outdoor Mass Sept. 26, 2019, in Hatch, N.M., part of a pastoral encounter by U.S. bishops with migrants at the border. The Sept. 23-27 pastoral visit, sponsored by various offices of the U.S. Conference of Catholic Bishops and other national organizations, aimed to highlight the church's ministry to migrants, the border conditions and immigration laws affecting them, and their material and spiritual needs. (CNS photo/Tyler Orsburn)

As a church and as people of goodwill, "we have to raise a prophetic voice," he said in an interview with Catholic News Service Sept. 26.

"We have to protect the most vulnerable in society. We are our neighbor's keeper," he said.

That means calling for investing in building up infrastructure in the countries of origin where many of those wanting to enter the U.S. come from so that instead of migrating, they can stay at home.

Migrants would prefer to stay in their home countries, Cantu said. It's an insight gained from his own parents, who left their native Mexico and settled in the U.S. seeking a better economic future but always longing for home.

"It's not pleasant to pick up and leave what you're familiar with, especially when it's a dangerous trek," he said. "There are so many unknowns, but they have to be able to find jobs and live in relative security and safety. There also has to be a future for their children. I believe that the United States has the capacity to help our neighboring countries in Latin America."

For Catholics who disagree with what the bishops and the Catholic Church leadership say on immigration, "I would say to them, 'Don't listen to me,'" Cantu said.

It is something that has been repeated again and again, and it comes from the Gospel of Jesus Christ, he said.

"It's terrible to know that there are some 55,000 people waiting on the other side of the border because they can't come across," Stowe said. "It was just months ago that there were thousands of people coming across the border and flooding this city and they were received in shelters throughout this city by people of faith who reached out, not only by our Catholic church, but other churches in town, reaching out and serving them."

And they did so with love, he said.

"That's a beautiful example for the whole country. It's what our nation was founded on and it's specifically important for our Catholic Church," he said.

As the church celebrates the World Day of Migrants and Refugees, it's a time to call attention, not only to the problems along the border, he said, but to adverse situations for migrants and refugees around the world.