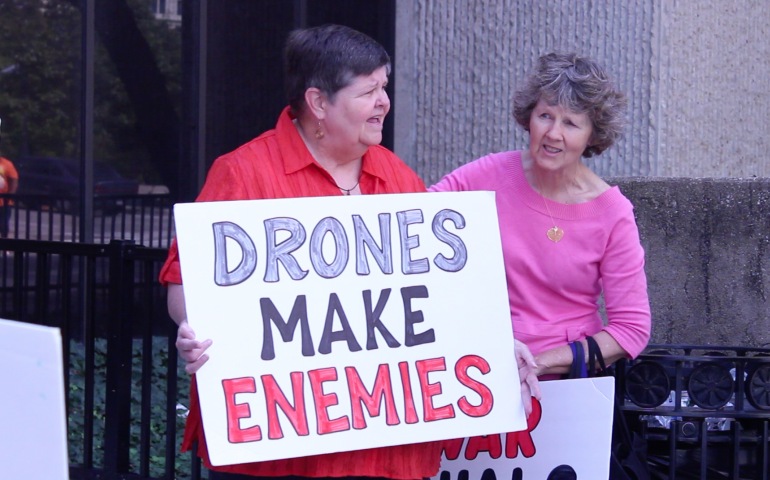 KANSAS CITY MO. — Georgia Walker, of PeaceWorks Kansas City, was found guilty Sept. 26 of trespassing on private property at the Bannister Federal Complex. Walker, with the support of other PeaceWorks protesters, crossed the property line of the complex in an act of civil disobedience to bring attention to the harmful nature of nuclear weapon production and usage May 31.

“I, as a someone who is striving to be nonviolent myself, cannot standby in conscience and not attempt to resist, even in this small way,” Walker told about 20 PeaceWorks activists outside of Kansas City City Hall before heading to trial at the Kansas City Municipal Court building.

The Honeywell nuclear weapons parts operation in the Banister Federal Complex, which is used to produce 85 percent of the nation’s nuclear weapon parts, closed July 8.*

Two of Walker’s aunts, who worked for the IRS in a building that Bannister used to create nuclear weapon parts, died of various cancers at the ages of 61 and 62.  According to Walker, they were just two of over 250 people who either died or have been permanently injured as a result of exposure to contaminants found at the complex.

“I don’t want that to happen to other families, and it has happened now,” she told NCR.

“We have this little rule: Do not step on private property. But we are asking the judge to look at the wider sphere of justice,” Stoever said. “We are saying we are not guilty of a crime, we are upholding the spirit of the law.”

After Stoever and Walker finished speaking, members of PeaceWorks gathered outside City Hall, holding signs and singing songs against nuclear weapons and drone strikes, marched the block to the Kansas City Municipal Court.

In the courtroom, Stoever’s attempts to speak about nuclear activity both in the Bannister Complex and the world were halted by the prosecutor, objecting that the case be held strictly to the charge of trespassing. The judge sustained the state’s objections, limiting Stoever to arguing where the property line was located.

The judge ruled that Walker did trespass, and sentenced her to pay court fees, along with a one year probation which includes staying 500 feet away from the Bannister Federal Complex and the new nuclear parts production plant.

The new plant, under the name of the National Security Campus, located on Botts Road in Kansas City, Mo., opened on Aug. 22.

PeaceWorks protested the opening of the new plant with a march and three property line crossings.

* In an earlier version of this story, it stated that the Bannister Federal Complex was closed on Aug. 21 due to contamination issues. This was not correct.