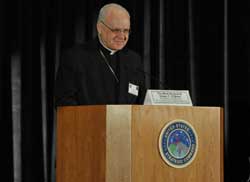 OMAHA, NEBRASKA
With a message aimed at the heart of the U.S. nuclear command, Archbishop Edwin O’Brien of Baltimore July 29 called for a world free of the threat of such weapons.

Speaking to an audience of U.S. military and diplomatic officials here, the former head of the U.S. Archdiocese for the Military Services gave the following abolitionist challenge: “A world with zero nuclear weapons will need robust measures to monitor, enforce and verify compliance. The path to zero will be long and treacherous. But humanity must walk this path with both care and courage in order to build a future free of the nuclear threat.

“Nuclear war-fighting is rejected in church teaching,” he said, “because it cannot ensure noncombatant immunity and the likely destruction and lingering radiation would violate the principle of proportionality. Even the limited use of so-called ‘mini-nukes’ would likely lower the barrier to future uses and could lead to indiscriminate and disproportionate harm. And there is the danger of escalation to nuclear exchanges of cataclysmic proportions.”

O’Brien’s message was unequivocal and he concluded that it is now a moral imperative for U.S. officials to urgently work for a world free of nuclear weapons.

Before O’Brien delivered his remarks, Chilton told NCR he knew the archbishop would be giving a tough speech. “A major purpose for this conference is to stimulate debate and discussion and I didn’t want to invite a monotone choir, if you will. So I greatly appreciate the fact that Archbishop O’Brien is joining us.

“I asked him to be one of our featured speakers because I think it is important for us to listen to his counsel and then understand how that shapes the broader political or national debate on this subject,” Chilton said. “It is a healthy debate for us to have as we contemplate what are the important steps that we must take today to ensure the peace.”

By design the symposium brought together a full spectrum of people who think about and work with nuclear and conventional weapons. The panels included people who can’t see a future without nuclear weapons, those who want them banned and eliminated, and many somewhere in-between.

While the conference included discussions about deterrence in general, much of the focus was on the second of two questions that Chilton had asked participants to use as a guide over the two days: “What is the role of nuclear weapons in 21st century deterrence?”

The archbishop’s address was titled “Nuclear Weapons and Moral Questions: The Path to Zero.” Before he began he warned the audience, saying, “I have been asked to offer more challenge than comfort.”

He began by briefly outlined traditional Catholic just war thinking and summarized church teaching on nuclear weapons from Pope Paul VI’s 1965 address to the United Nations General Assembly -- "No more war, war never again!" – through the Vatican’s work on the Nuclear Non-Proliferation Treaty, the U.S. bishops’ peace pastorals of 1983 and 1993, up to the 2006 World Day of Peace Message by Pope Benedict XVI.

In that message, the pope asked: “What can be said … about those governments which count on nuclear arms as a means of ensuring the security of their countries?” Then answering his own question he said: “[T]his point of view is not only baneful but also completely fallacious. In a nuclear war there would be no victors, only victims.”t

Gerard Powers, the director of Catholic Peacebuilding Studies at the Kroc Institute for International Peace Studies at the University of Notre Dame, after reading O’Brien’s speech, said the archbishop, a member of the U.S. bishops' Committee on International Justice and Peace, was “reinforcing a major shift in emphasis since the end of the Cold War.”

“This talk,” Powers said, “reflects a dramatic -- and somewhat ironic -- change in the nuclear debate. The risk of global nuclear war has receded since the end of the Cold War but the risk of nuclear use has increased.”

The increase, he said, comes from several sources: nuclear proliferation, so-called "loose nukes" from the former Soviet Union and Pakistan; the rise of global terrorism, and the development of more “usable” mini-nukes.t

“The irony -- and good news -- is that this increased threat of nuclear use has led, not to calls for strengthening our nuclear deterrent, but to calls by President Obama and even nuclear ‘realists’ like Henry Kissinger for nuclear disarmament,” Powers said.

“Some of the same people who dismissed the bishops as ‘naïve’ and ‘utopian’ in 1983 for insisting that nuclear disarmament must be the ultimate goal, sound a lot like the bishops today,” he said.

At the conference, differences in viewpoint and purpose were clear.

O’Brien, for instance, was clear that deterrence through nuclear weapons can only be an interim step in the eventual elimination of the weapons. But in talking to NCR about O’Brien’s message, Chilton seemed to take another track.

“If you listened to the discussion, the panelists, I think, quite rightly continually brought the focus of the discussion back not from nuclear warfare but to the topic of deterrence and how nuclear weapons can play a role in deterrence.

“Not just in deterring nuclear war and the horrors of that, but also deterring world war on the scale of World War I and World War II, which I would argue are equally abhorrent and certainly a part of our human history that I don’t necessarily believe we have outgrown the penchant for. Certainly not forever,” Chilton said.

The stated success of nuclear weapons in ending World War II and keeping the world free of major armed conflicts since were common themes throughout the conference panels and discussions.

Russian Ambassador Sergey Kislyak attended the conference and told the audience, “While we all want to get to zero, we must set up conditions to achieve that. This cannot and will not happen quickly,” he said. “It will take generations of negotiations to achieve.”

In an interview with NCR, O’Brien said such comments didn’t surprise him. “They [the people at the conference] are so used to the status quo. Deterrence and arms reduction, they will accept, but I think there is real skepticism about what [U.S. President Barack] Obama and [Russian President Dmitry] Medvedev spoke about and that is doing away with nuclear weapons all together. It seems like an ideal that is beyond practicality. I can understand that.”

O’Brien added that perhaps the most one can hope for from the people who attended the conference will be their sense of the practical. “The stakes are very high right now … If we don’t take steps now they are going to get higher.”

“What I hope for from this group is [that they can] take some steps to seriously talk about how we can put our best foot forward to convince the rest of the world that we are genuine and serious about [nuclear disarmament.]”

In his opening address, Chilton said he called for this conference “to stimulate and enlighten the thought on the subject of deterrence” and to “stoke the intellectual fires on the study of deterrence.”

He had come to realize that it has been “the better part of two decades since most of us in the U.S. Department of Defense have invested the appropriate time, thought and consideration into studying the topic of deterrence.”
There was no conscious decision to stop thinking about deterrence, he said. The peaceful end of the Cold War and other global events – like the first Gulf War, conflict in the Balkans, Iraq and Afghanistan – “drew our attention away from thoughts of strategic deterrence,” he said.

“I think we have allowed an entire generation to skip class, as it were, on the subject of strategic deterrence,” Chilton said.

A number of conference participants called it an “historic” gathering as they met and spoke to each other between sessions.

The conference was held at the Qwest convention center in Omaha.

Sergey Kislyak said July 30 that this may be the only two-day conference that he has ever attended where “I want to hear every panel discussion – and I did.”

Nielsen's policies were both inhumane and ineffective, advocates say