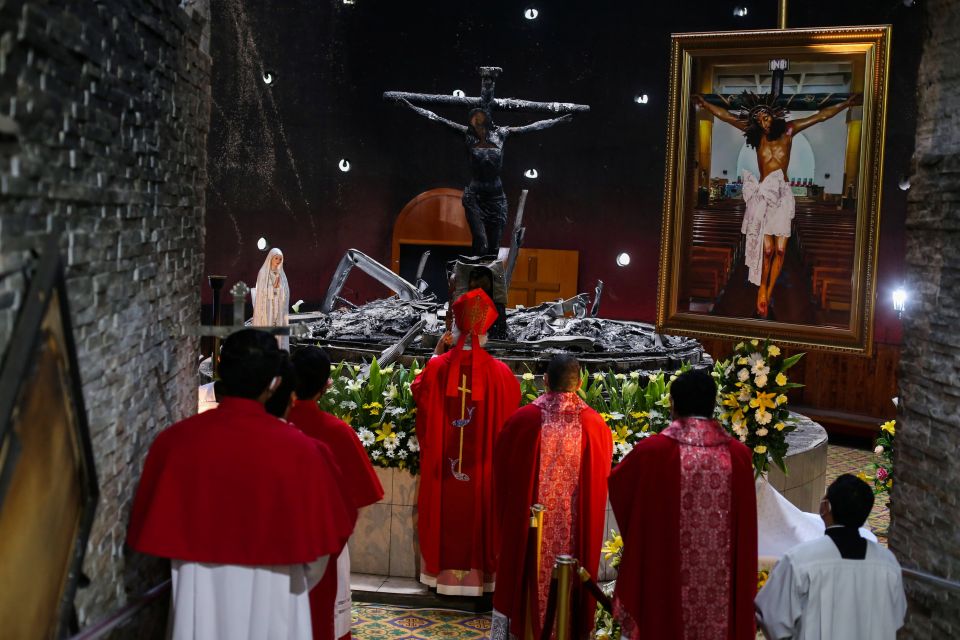 Nicaraguan Cardinal Leopoldo Brenes Solorzano of Managua prays as he celebrates Mass at the Metropolitan Cathedral July 31, 2021. As the country marks a bicentennial Sept. 15, church leaders say "the political and social situation must not continue the same." (CNS photo/Maynor Valenzuela, Reuters)

Managua, Nicaragua — Church leaders in Nicaragua said "the political and social situation must not continue the same" as the country marks a bicentennial marred by political repression, mass migration and a scandalous response to the COVID-19 pandemic.

A document released in advance of the Sept. 15 bicentennial from the Archdiocese of Managua's justice and peace commission said the church "wants to be a voice of encouragement and hope" in Nicaragua.

The commission also hoped for a "homeland that respects human rights, freedom of the press and the right to opine differently ... where there doesn't exist the fear of free, transparent and competitive elections, nor political prisoners, nor media outlets closed or impeded from informing."

Sadly, the commission said, "We have decades of confrontations, which have generated unemployment, generalized poverty, citizen insecurity, forced exile (and) neglect of education and health."

"There's nothing to celebrate," said Msgr. Carlos Áviles, spokesman for the Archdiocese of Managua. "We don't have any kind of independence. It's still an ideal."

Nicaragua arrives at its bicentennial amid political repression as the regime of President Daniel Ortega imprisons potential opponents ahead of November elections.

The regime has imprisoned protesters and besieged churches celebrating services for the families of political prisoners. The church itself has been seen as a political opponent, while homilies of prominent bishops attract enormous attention from independent media.

The Nicaraguan bishops' conference also released a bicentennial statement, calling for unity and saying the country "needs to rekindle hope."

"Today we need, more than ever, lucid, knowledgeable, and respected authorities, who know how to pursue civic friendship, tolerant and respectful dialogue, a search for the common good — above personal and partisan interests," the bishops said. "This is the way to find the paths to justice and social peace."

Pope Francis calls for 'courage' toward peace between Israel, Palestine