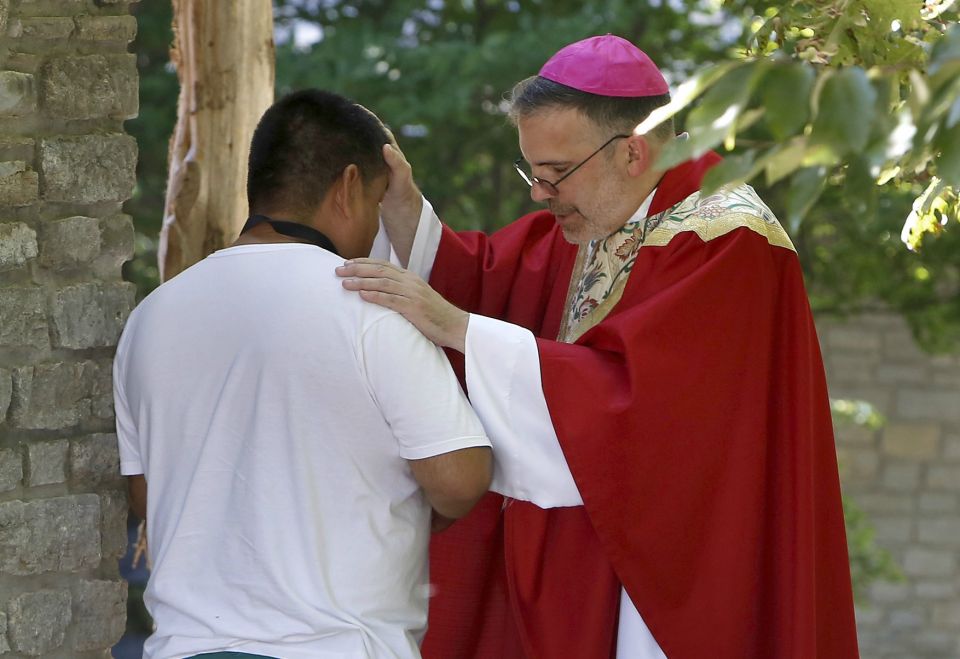 A Kentucky bishop stands by his criticism of some abortion activists' support of President Donald Trump, whom he considers "not pro-life" because of a lack of consistency on life issues such as racism, immigration and the environment.

Although some activists take a broader approach, others "narrowly define the pro-life agenda to just abortion," said Bishop John Stowe of Lexington, Kentucky. "That's not what pro-life is."

In a Jan. 23 op-ed in the Lexington Herald-Leader, Stowe said Trump hats — such as the MAGA (Make America Great Again) ones worn by Covington Catholic High School students — are not pro-life, since they imply support for a president "who denigrates the lives of immigrants, refugees and people from countries that [Trump] describes with indecent words and haphazardly endangers with life-threatening policies."

The newspaper column received widespread coverage and some criticism, but Stowe told NCR he saw it as a "teaching opportunity" to challenge a narrow pro-life view.

"I know Catholics who are pro-life in the fullest sense of the word," he said. "But too often the pro-life movement has been coopted by a particular party."

Stowe is especially concerned that in the past few years the annual March for Life — the political protest, as opposed to the Mass that proceeds it — has become too aligned with the Republican Party and the Trump administration. In 2017, Vice President Mike Pence addressed the event. Last year Trump spoke via satellite, the first U.S. president to do so.

This year's march featured two GOP and two Democratic lawmakers, but the media attention did not focus on them. Instead, social media exploded with video and commentary of an incident after the march, between the Kentucky Catholic school students, an activist from the Indigenous Peoples March and a fringe group called the Black Hebrew Israelites.

The students' chants and "tomahawk chop" gestures toward the Native American activist were initially seen as confrontational and racist, although some — including Covington Bishop Roger Foy— rescinded their criticism after other videos showed the students on the receiving end of insults by the Israelites group.

In his op-ed, Stowe said he did not place blame "entirely on the students," but that he was "ashamed" that their actions "have become a contradiction of the very reverence for human life that the march is supposed to manifest."

"As such, I believe that U.S. Catholics must take a look at how our support of the fundamental right to life has become separated from the even more basic truth of the dignity of each human person," Stowe wrote.

Stowe had expressed a similar concern before the march, in his regular column in the Lexington diocesan newspaper. While saying he was "encouraged" by young people from the diocese who attend the march, he said "our reverence for life cannot be limited to life in the womb, as obviously important as that is."

"It is frustrating when people who strongly advocate the anti-abortion cause fail to see the protection of the environment as a pro-life issue, or do not criticize the separation of children from their parents at the southern border of the United States, or do not see how curtailing health benefits for segments of the population ends up hurting so many children for whom they advocated during the time when they were in the womb," he wrote.

Stowe said his pro-life views have been inspired by Pope Francis as well as the late Cardinal Joseph Bernardin's "seamless garment" approach.

As episcopal president of Pax Christi USA, Stowe has seen a broader pro-life commitment to peacemaking, disarmament and anti-racism among its members, he said.

"Pro-life is about the dignity and reverence for the human person," Stowe told NCR, citing Francis' directive to "reach out to those in the margins."

That includes lesbian, gay, bisexual and transgender people for Stowe, who sees LGBT people in the church as "certainly marginalized."

In 2017, Stowe gave homiletic reflections during prayer services at the annual symposium sponsored by New Ways Ministry, which offers outreach to LGBT Catholics. This weekend, he will lead a retreat for LGBTQ students at the University of Notre Dame. Both appearances have drawn criticism from more conservative Catholics. He is also the ecclesial advisor to the executive director of Fortunate Families.

Trump voters in Kentucky — some who hoped for anti-abortion judicial appointments, others who supported him in hopes of revitalization of the coal industry — seems to remain committed to the president, Stowe said.

"It seems to be whatever you decided you support, you're stuck with," he said.

But the bishop, a Conventual Franciscan, said he will continue to follow Francis' directive to "go out of our comfort zones" to reach out to the marginalized and speak up for a broader vision of "respect for all human persons."

That's even harder with church leaders' loss of credibility because of the sex abuse crisis, Stowe said, "but we can't remain silent."