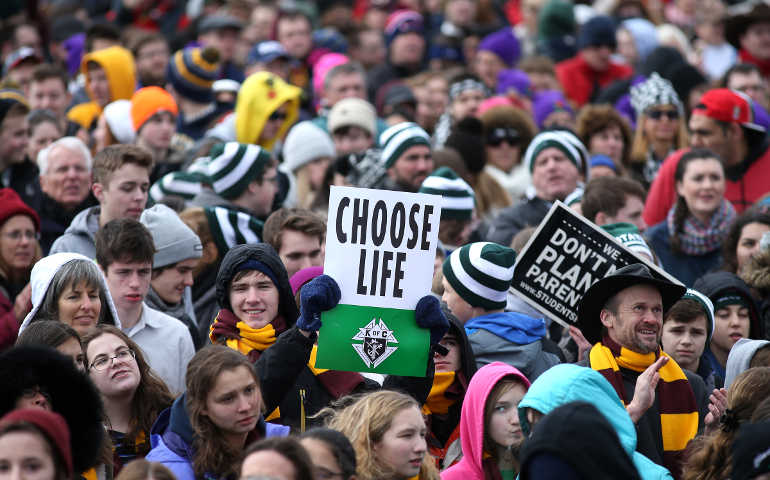 A week after the inauguration of President Donald Trump, throngs of anti-abortion marchers gathered near the White House to applaud his administration’s actions and his plans to support their cause.

And they cheered top officials of the new administration who spoke at the march. Their presence represented a break from previous years in which the White House was not represented in person at the rally.

“Life is winning in America and today is a celebration of that progress,” said Vice President Mike Pence, who was joined Friday (Jan. 27) by his wife Karen and daughter Charlotte on the stage in the shadow of the Washington Monument.

He, along with members of the crowd before the rally, highlighted Trump’s signing of a memo on Monday that re-established the so-called “Mexico City Policy,” which halts government funding of groups that support or conduct abortions overseas.

And next week, he said, “President Donald Trump will announce his Supreme Court nominee who will uphold the God-given liberties enshrined in our Constitution in the tradition of the late and great Justice Antonin Scalia.”

Pence also called on the crowd to foster a movement of “love, not anger.”

“I believe we will continue to win the hearts and minds of the rising generation if our hearts first break for young mothers and their unborn children and if we, each of us, do all we can to meet them where they are with generosity, not judgment,” he said.

The mood, even as clouds increased and temperatures seemed to drop, was buoyant.

People jumped and sang along to music and chanted “life” after March for Life President Jeanne Mancini prompted them with the word “pro.” When people held their babies high in the air, others around them cheered.

Pence was one of two administration officials who addressed the crowd, gathered for the 44th year for the annual protest of the 1973 Supreme Court decision that legalized abortion.

“This is a new day, a new dawn for life,” said Kellyanne Conway, who drew screams of delight when she identified herself as a Catholic, along with her titles of wife, mother and a “pro-life” counselor to the new president. “We hear you. We see you. We respect you and we look forward to working with you.”

Even as the Trump administration made plans to restrict abortion services in the U.S. and abroad, members of the crowd set their goals even higher.

“We’re here to show our elected officials the overwhelming support for repeal of Roe v. Wade and the subsequent holocaust of the murder of innocents,” said Dr. Mark Doherty, a cancer surgeon from Arlington, Va., who wore the white coat of the Catholic Medical Association and stood in the front row of the crowd before the rally began.

From Indiana to Kansas to Florida, senior citizens and students filled the monument grounds to hear speeches from religious, sports and political celebrities before marching to the Supreme Court.

Cardinal Timothy Dolan of New York opened the event in prayer while Church of God in Christ Bishop Vincent Mathews Jr. gave the benediction. Christian author Eric Metaxas prayed for Madonna’s conversion and Baltimore Ravens tight end Benjamin Watson spoke of supporting life for everyone — the unborn, the poor, the sexually trafficked as well as the elite.

Referring to the large, mostly pro-abortion-rights throngs at the recent Women’s March on Washington, Mancini said it was more important to focus on the numbers of lives lost to abortion than on the size of the crowd.

“We stand here for them today,” she said. “We stand for the little innocent children who have lost their lives and we stand for their mothers who regret being involved in this sin, abortion. … Pro-life is pro-woman.”

Members of the crowd rejoiced in the departure of the Obama administration, which they considered to be the antithesis of their anti-abortion activism.

“I believe that we had a culture of death and destruction of the unborn for eight years and we finally have hope that life will be the utmost priority,” said Roberta Vacca of Westerly, R.I., who snagged a spot close to the stage.

Many, especially younger members of the audience, hoped to see a change in the legal status of abortion in their lifetimes — and some predicted the next time they gathered on the National Mall it would be for a celebration instead of a protest.