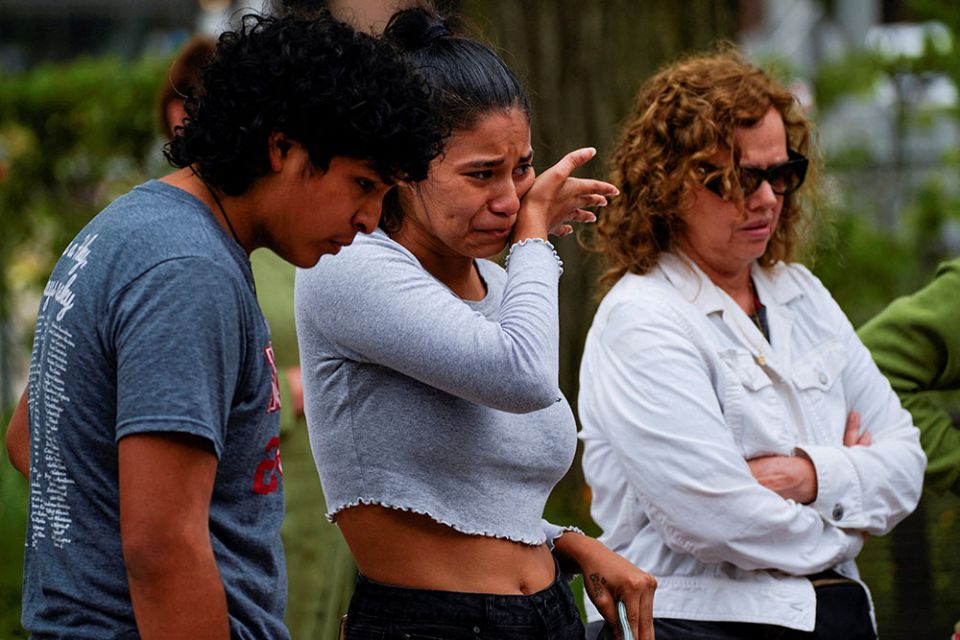 Jazel Ramos, niece of victim Eduardo Uvalde, cries while visiting a memorial site July 6 in Highland Park, Illinois, after a mass shooting at a Fourth of July parade. (CNS/Reuters/Cheney Orr)

Washington — The July 4 mass shooting brought devastation to yet another community in the U.S., and such a tragic situation "has become shockingly commonplace in our country," said the chairmen of three committees of the U.S. Conference of Catholic Bishops.

During a Fourth of July parade in the Chicago suburb of Highland Park, several people died and 30 others were injured when a gunman perched on a rooftop fired on people lining the parade route. Five people died at the scene and two died later in the hospital.

Law enforcement authorities apprehended Robert E. Crimo III, 21, some hours after the shooting and charged him with seven counts of murder July 5. More charges against him were expected.

"One of the many horrors that emerged from this shooting was the orphaning of a 2-year-old boy," the bishops' conference committee chairs said in a joint statement July 6. "He was found underneath his father, who died shielding him from gunfire. Our prayers are with this child, and all those who grieve in the face of this tragedy."

"It seems there are no days of the year when our nation is not grieving the latest mass shooting. It has not always been this way, and it is getting worse," the bishops said.

"That the Highland Park shooting took place on a day when we celebrate all that is good about America and America's freedoms is a devastating reminder that mass shootings do not happen with the same relentless and brutal frequency in other places in the world," they added.

"It can be hard to find hope now, though we know our hope is in Jesus who is always near to us in suffering," the prelates said. "We are grateful that Congress recently passed its first major gun legislation in nearly 30 years."

Among its provisions, the new law:

In a June 23 letter to all members of the Senate and House, the three committee chairmen — joined by a fourth, Bishop Thomas Daly of Spokane, Washington, head chairman of the bishops' Committee on Catholic Education — endorsed the gun safety measure. It was a follow-up letter to a June 3 letter endorsing gun safety legislation.

But "in the face of these repeated acts of violence," putting into place a new law on gun safety "cannot be all we do," the bishops said.

"We call on Catholics, lawmakers, community leaders, health care and social service providers, law enforcement and families to keep pushing for change and offer prayers, support and generous assistance to victims," they said.

"For years, the Catholic bishops of the United States have supported policies to strengthen gun laws, as well as emphasized mental health, family, and cultural factors, aimed at curbing gun violence," they continued. "We support a total ban on assault weapons and limitations on civilian access to high-capacity weapons and ammunition magazines."

They called it "sobering" to think "that as horrible as mass shootings are, they are but a sliver of total annual homicides committed with guns; and gun homicides, in turn, are far outnumbered by gun suicides."

"May we live to see an America that can celebrate its freedoms without orphaning its children," the prelates said. "May the pursuit of liberty one day be a faithful guardian to the pursuit of life.

"May the light of God's compassion shine on us and guide our feet out of darkness and the shadow of death, and into the way of peace."