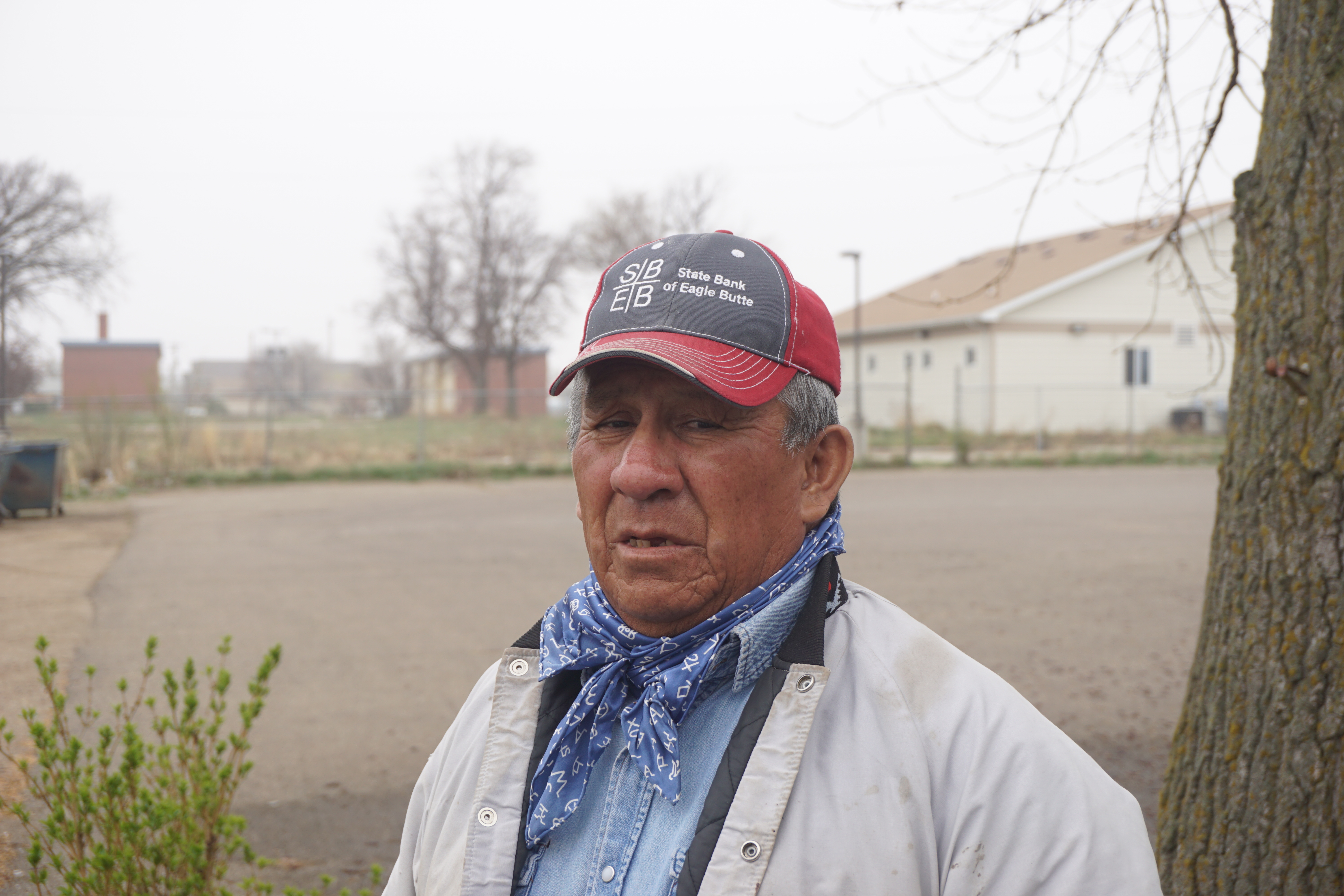 Zigmund Hollow Horn sat inside the deanery of a small Episcopal church just off Eagle Butte's main street. A thick fog had settled over town. The engine of his pickup, parked outside, pinged and crackled.

Sitting on a couch, his eyes trained outward and down, he began to talk about his life.

"I'm a 65-year-old male, Native American, recovering alcoholic of 25 years," he said. "I've been in pain ever since I can remember," emotional pain, physical pain. "Day in and day out, I go to bed with it," he said.

"Anyways, that's all due to my upbringing."

Like many in Cheyenne River, and throughout Indian Country, Hollow Horn attended an American Indian boarding school. Boarding schools were government and church-run educational facilities that openly sought to Westernize and Christianize Native American children — an experience that facilitated a direct continuation of the logic brought by the Doctrine of Discovery.

Hollow Horn's mother died in childbirth. He spent the first five years of his life in quarantine with tuberculosis. Following his release from quarantine, his father sent him to "a Catholic Indian mission school, St. Joe's Indian mission" in Chamberlain, S.D.

Hollow Horn and his classmates were given uniforms and chores. They "went to church three times a day, constantly, day in, day out."

Standing in the pews, away from their family, their culture banished and condemned, some children would faint. "And when they faint, there's no mercy," Hollow Horn said. "They just drag you out, take you to the back of the pews somewhere, and they slap you up, wake you up, give you water or whatever. … Then they take you back again, put you in your pew."

Classmates were regularly hit or whipped with a belt. "The older classmates would hold you down," he said. "They had to hold you down. That's an order."

Marcella Le Beau also witnessed abuse in a government-run boarding school. "I saw the whipping lines," she said, "when they would punish the boys. They would make them take off their leather belts … and whip them as they ran through."

Like Hollow Horn, she said that children internalized their anxiety and trauma.

Despite the trauma she suffered at boarding school, Le Beau later moved off the reservation, going to Pontiac, Mich., and California. She served as an Army nurse during D-Day, and eventually moved back to Cheyenne River, where she advocates for her people.

Hollow Horn wasn't so fortunate. He said his boarding school experience broke him. Moving into adulthood, he fell into alcoholism and out of touch with his own children, spending the last quarter century in psychological, emotional and spiritual recovery.

Others were even less fortunate.

"A lot of these guys on this reservation, they kept quiet through their years, and when they got older, they went to alcoholism, and they died that way," Hollow Horn said.

"They got us when we were young," he said. "I used to speak my native tongue when I went down there, and I can't even talk now. They beat it out of me.

"If you spoke your language, they held you down, put a bar of soap in your mouth."

Many contend that the boarding schools represented a focused effort — a collusion between church and state — to stamp out Native American identity, affecting generations of children.

Tsianina Lomawaima, a leading authority on Native American education, agreed with that characterization to a point, but cautioned against generalizing.

"People want to know the story, and there is no one story," she said.

The schools emerged in the late 1800s, part of a U.S. government-led effort to "civilize Indians," she said. "And that, of course, meant Christianizing — those two things were not seen as separate at all."

Whether Catholic or the more numerous "federal" (run by the government and promoting Protestant Christianity), the schools functioned in essentially the same manner. However, student reaction "varied dramatically between someone who went into the school as an English speaker from a family that had been Christian for three or four generations, and really wanted an education," said Lomawaima, "and someone like my dad, who went in under duress, [on] order of the courts, separated from his family at the age of 8 or 9, didn't see his mom again until he was a teenager."

"He was one of those that had a very negative experience and feelings about it, but still as an adult could say about some aspects of the school, like the trades training he got, 'There are things I learned there I would have never learned otherwise.' "

Nevertheless, the schools exercised a fundamental kind of "violence," Lomawaima said, "taking kids away from their families, educating them in a system of knowledge, language, economy, law, diet, clothing, everything, different from who they are. … And the physical violence on top of all that."

Some children were forcibly brought to the schools by the police while others were sent "voluntarily" by parents. "But you have to think carefully about the word voluntary," Lomawaima said. "If this is the only school that will accept you, if it's the only chance for you or your child's education, is that voluntary?"

During the Great Depression, "people couldn't feed their kids," she said. U.S. public schools were often closed to Native Americans, and "some parents really wanted their kids to have an education."

Catholic boarding schools were numerous in the Northern Plains, Lomawaima said. They were also present nationally. But outside of Canada, very little is known about them.

"I regret to say that I don't know of anybody who's looked at Catholic schools in the U.S.," she said. "Welcome to the black holes of Native American history."

Editor’s note: It may seem like papal statements from 500 years ago are ancient history. But Native American activists and scholars insist that Catholicism's past continues to affect the present. Papal bulls from the 1400s condoned the conquest of the Americas and other lands inhabited by indigenous people. The papal documents led to an international norm called the Doctrine of Discovery, which dehumanized non-Christians and legitimized their suppression by nations around the world, including by the United States. Now Native Americans say the church helped commit genocide and refuses to come to terms with it. This is Part Two of a six-part series on the legacy of the Doctrine of Discovery.