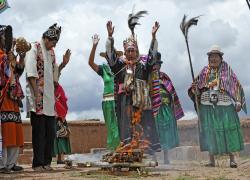 Bolivian President Evo Morales, seond from left, takes part in an indigenous ritual held in the temple complex of Tiwanaku Jan. 21, as part of the ceremonies for his inauguration for a second term. (AFP/Aizar Raldes)

The government of Bolivian President Evo Morales Ayma, inaugurated Jan. 21-22 for a second term in office, sets the stage for the latest experiment in the interplay of traditional forces of Latin American Catholicism and recently insurgent indigenous religions and cultures.

It took two days for Morales’ inauguration. The swearing in on Jan. 22 followed a full day of celebrations in the ancient Andean ceremonial ruins of Tiwanaku, about 50 miles outside of La Paz.

Morales was re-elected last December with 64 percent of the vote while gaining a two-thirds majority for his Movement to Socialism Party in the new Congress. Donning ceremonial vestments of the Andean peoples, he made his inauguration the occasion of symbolically stating his party’s principles and his goals. The event underlined the Andean belief that the Pacha Mama, the “Earth Mother” of the native peoples, is the symbol of the union between humankind and nature, joining ecology, ethics and economics.

As an Aymara Indian, Morales proclaimed himself an heir of the struggle for the rights and dignity of native peoples throughout the Americas. He pledged that his administration would write those aspirations into the law of the land.

He also reiterated commentaries he made at the U.N. climate change conference in Copenhagen, Denmark, where he said that these principles are for uniting the native peoples of the world against the excesses of a suicidal, planet-destroying globalization.

In 1985, Bolivia became a bell jar-enclosed laboratory experiment for neoliberal capitalism. The theory behind that experiment held that the state must not interfere or intervene in the free market. It held that Bolivia needed to sell all its national natural resources -- gas, oil, water, forests, and other materials -- to outside investors. It held that no laws were to be made that would regulate capital transfer out of the country.

However, facing ever stronger organized street protests through a long period of bitter social struggle, the experiment finally collapsed in December 2005 with the election of Morales and the ascendency of the Movement to Socialism.

Bolivia, now officially called the “Plurinational State of Bolivia,” is a country the size of Texas and California combined, with a population of almost 10 million. Over 60 percent of its people are members of 36 different ethnic groups. Twenty-five percent of its people are mixed race. Only 15 percent can claim they are “pure blood” European stock. But those 15 percent, called criollas, have historically run the country, its economy and its politics.

Until 1952, the native people were not allowed a vote in the Republic of Bolivia, which was founded in 1825 by Simón Bolívar. Until the last half of the 20th century, the native people also could not enter the main streets and plazas of the cities.

All of this took place under the authority of successive constitutions blessed and supported by the Catholic church, which was given a legal place of privilege. Freedom of religion was not granted until the end of the 19th century. The Catholic church, meanwhile, accepted slavery, as well as class and race distinctions.

The government of the Movement to Socialism began its political and cultural reforms in January 2006. It had argued for a new constitution and got it, finally approved by two-thirds of the voters in 2009. The new constitution proclaimed freedom of religion, including the ancestral religions of the indigenous people. No longer would any church have special rights.

Under the government’s economic management since 2006, called “21st-century socialism,” Bolivia has brought inflation almost down to zero, according to the International Monetary Fund, and the nation has an annual economic growth rate of 4.3 percent, one of the best in Latin America.

Per capita income in 2005 was $1,010; now is $1,671. The gross international reserves were $3.2 billion in 2006; they were estimated at $8.6 billion in 2009. The national debt is about $5 billion, but the borrowed money is now going into programs of health, education, welfare and direct investments. The state is now developing, with private international investors, the nationalized companies in natural gas, oil, steel and, soon, lithium. Bolivia’s salt flats cover the largest deposits of lithium in the Western Hemisphere.

The government has initiated an incentive program to subsidize parents who keep their children in school. The dropout rate up to eighth grade has fallen from 5 percent to 2 percent. The reading program has been almost 100 percent effective in a country that once led the Americas (except for poor Haiti) with a more than 40 percent rate of illiteracy.

National health care and retirement funds now have universal coverage of some kind. All pregnant women receive prenatal and postnatal care and health care for their children up to 2 years old. International oil and gas prices have provided the cushion.

Five hundred years after the Spanish conquest, Bolivia continues to be extremely poor. But the policies of redistribution and growth, with popular participation, provide the solid base of constructing a national future of equality and hope for all Bolivians.

Bolivia’s changes are now giving Latin America a new laboratory for socialism as it did for neoliberal capitalism 20 years back. However, with another world depression upon us, governments, churches and intellectuals must debate again the ancient enigmas: What is the proper role of the state and what are the ethical limits of private ownership and creative investment in any society?

And how the local Catholic churches of Latin America adjust to this new era remains to be seen.

[Fr. Michael J. Gillgannon is a priest in the Kansas City-St. Joseph, Mo., diocese and has spent 35 years as a missionary in La Paz, Bolivia.]