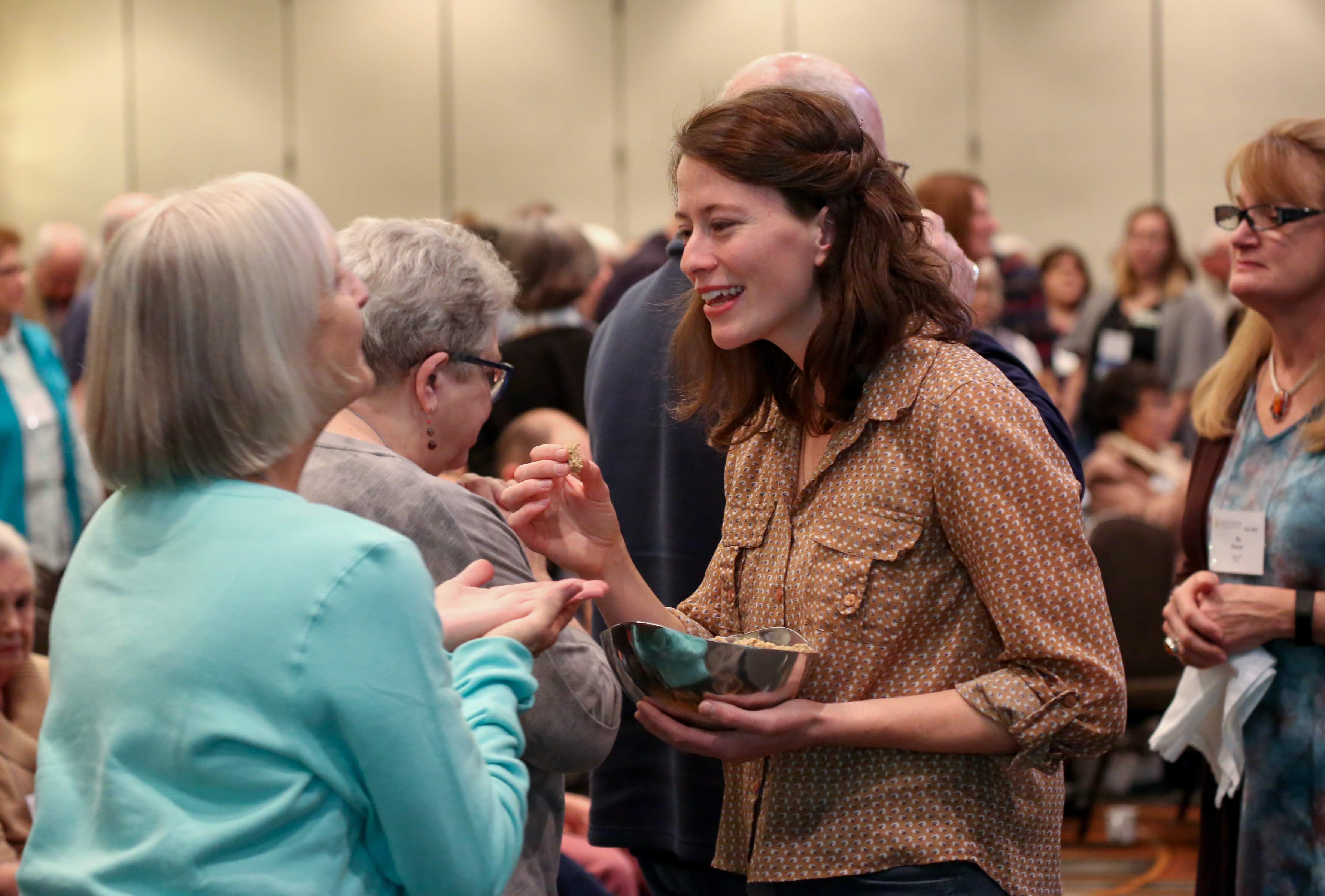 A young adult member of Call to Action offers communion during the closing liturgy of the 2018 national conference. (Deborah Winarski)

Editor's note: This is part three of a three-part series on Call to Action, which has fought for reform in the church since the late 1970s and provided an important community for "Vatican II" Catholics during a rise of conservatism in the church hierarchy throughout the '80s and '90s.

Our first story took a look at the challenges facing Call to Action, including an aging and declining membership and financial shortfalls. But a group of new, younger leaders are connecting with CTA through an innovative new program called Re/Generation, as our second story describes. These millennial Catholics may change the organization as they take over, however, and what such generational differences mean for the future of church reform will be explored in our last story in the series.

It was hard to miss the millennial members of Call to Action's new Re/Generation program at the organization's national conference last November in San Antonio. They were energetic. And loud.

But that didn't bother Dora Saavedra, a 66-year-old, long-time Call to Action member who has been paired as an elder mentor to two young women through the program. She may bristle a bit at the term "elder," but Saavedra is optimistic about the influx of younger progressive Catholics — even if they eventually change how the 40-year-old organization does church reform and social justice.

"My hope lies not in the future, but in the present with young people," she said. "I think they have a much healthier relationship to the church. They have faith, but it's not 'pray, pay and obey' when it comes to the hierarchy."

Saavedra, whose husband served as a temporary executive director during leadership changes in Call to Action, joined the organization 1997 after their gay son came out to them. They now worship at an intentional Eucharistic community in McAllen, Texas, and are active in the Rio Grande Valley chapter of CTA.

But for some other long-time members of CTA, the changes in the organization are concerning. Tom Lupia, chair of the local chapter in Columbus, Ohio, believes the national organization is moving "in the wrong direction."

The emphasis on attracting younger members and on racial justice is taking away from what he believes should be CTA's primary focus: church reform issues, such as the exclusions of women and noncelibate men from ordination, the divorced/remarried from communion and ordinary Catholics from more decision-making power in parishes.

Attracting young people is fine, though Lupia thinks CTA has "always focused too much on the color of their members' hair," which he sees as a "red herring."

"Programs intended to increase membership, even targeted membership like younger people, don't work unless you have a primary program they can buy into," he said.

And that program should be church reform, he said, not broader justice issues, which are covered by so many other groups in and out of the church: "How can Catholics have credibility on the issue of social justice when we don't deal with social justice in our own church?" he asked.

The social-justice-versus-church-reform debate has been part of CTA's history since early on, but current tensions, though small, may reveal broader generational differences, even among progressive Catholics who agree on social justice and church reform issues.

Millennials — like all generations — want to articulate their own agenda and priorities and not be perceived as a "side show to older groups," said William Dinges, professor of religion and culture at the Catholic University of America in Washington D.C.

Dinges, a baby boomer who has studied young adult Catholics, said his generation tends to "mistakenly assume that our agenda in the church is the same as their agenda."

Often it's just a matter of a different emphasis. Younger progressives are more focused on justice issues that affect them in their day-to-day lives and less interested in the internal issues that Pope Francis has warned can be too "self-referential," said Robert G. Christian III, the founding editor of Millennial, a website for young Catholics.

While internal church reform issues "aren't irrelevant," according to Christian, among his generation, "there is a much greater desire to try to advance social justice and bring about the kingdom of God that way." 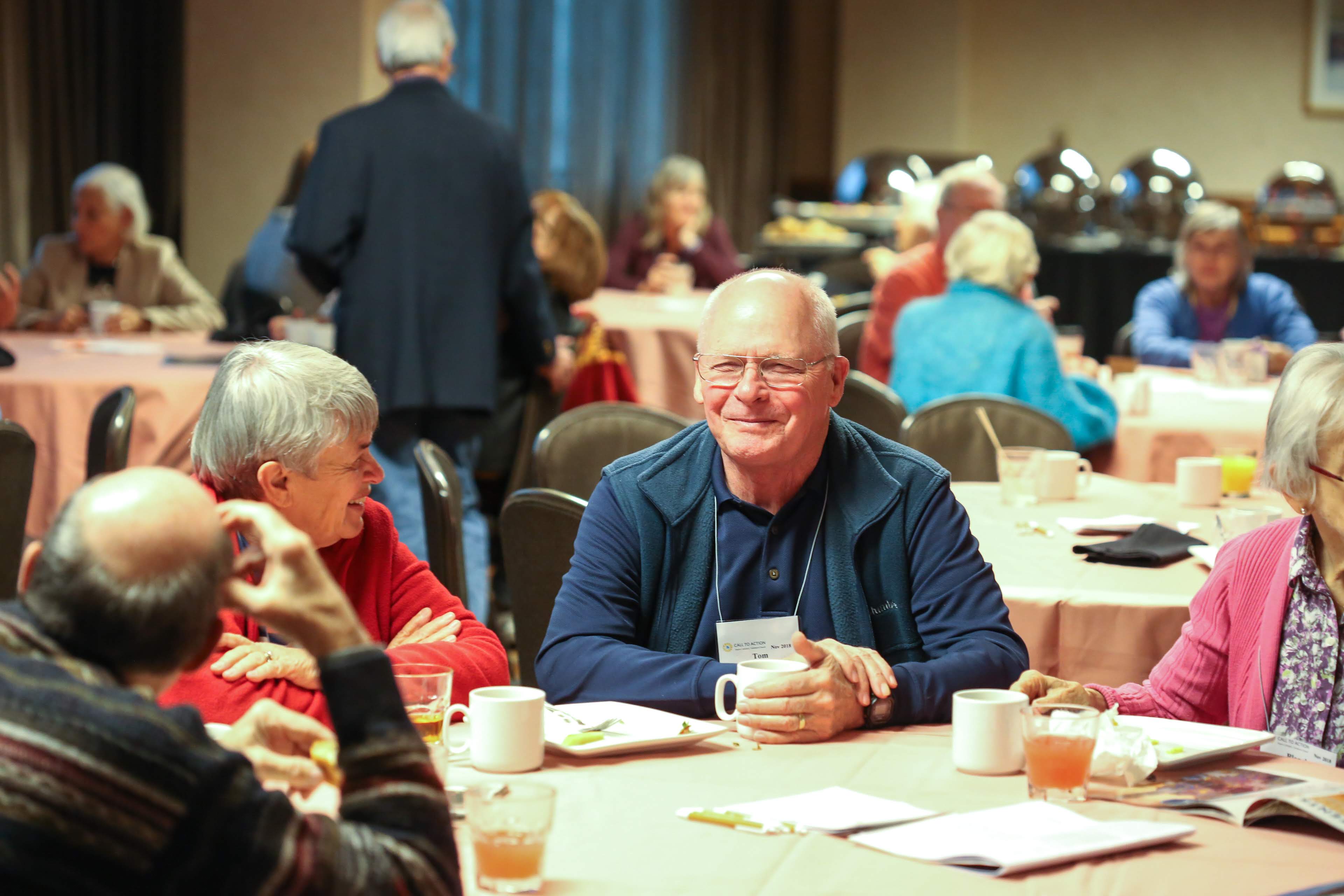 Betty Hill, left, who serves as president of CTA's Western Washington chapter, and her husband, Tom. Both are long-time CTA members. (Deborah Winarski)

On issues like poverty and the environment, "the Millennial generation is maybe the most progressive generation in American history," Christian said, noting that even conservative Catholics use "progressive language," such as emphasizing the human rights of the unborn.

But they may be turned off by the confrontational or antagonistic tone in some older church reform organizations, he said, or by the frustration that church teachings, on internal issues such as women's ordination are slow to change, if at all. "It makes a lot more sense to spend their energy in other areas, building the common good in society," he said.

Liberal, conservative or moderate — millennial Catholics have to make the decision to be Catholic in American culture where religion is a matter of choice. And they are being outpaced by the growth of the "nones," or those choosing to disaffiliate from institutional religion altogether, leading to what Mark Silk calls "the hollowing out of American religion."

"It's an across-the-board phenomenon, not just among Catholics," said Silk, a professor and director of the Greenberg Center for the Study of Religion in Public Life at Trinity College in Hartford, Connecticut. "That cohort of young adults doesn't feel like religious institutions are the place where they do their moral politics." 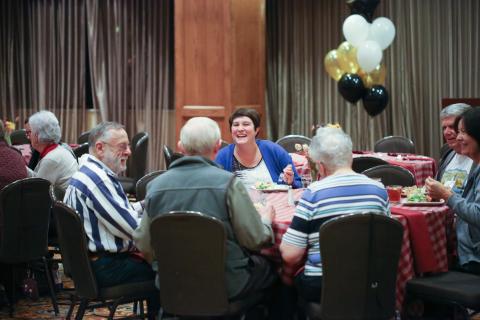 Not only has the proportion of disaffiliated risen from less than 10 percent in 1990 to nearly one-quarter today, but actual membership in religious institutions has declined nearly twice as fast as the proportion of "nones" has risen, Silk said, citing a recent Gallup poll.

Silk believes that young progressive Catholics are "an important remnant," but that their numbers will likely not be influential, somewhat akin to the smaller numbers of mainline Protestants. "There aren't that many of them, so it's a tough slog," he said about young liberal Catholics.

Yet, this disaffiliation is happening at a time when major political conflicts are centering on issues in which Catholic moral teachings have much to say, said Patricia O'Connell Killen, who with Silk is co-editor of a new book on "The Future of Catholicism in America" (Columbia University Press).

"This isn't an argument about whether young people care about meaning or not. My sense is they want to be people of integrity and they seek wisdom," said Killen. "What they do not share with boomers or even Gen-Xers is an assumption that historic faith traditions are useful for finding wisdom."

If they find community in churches, they will engage, but their suspicion of institutions leads them to select only those that meet their needs, said Killen, professor of religious studies at Gonzaga University in Spokane, Washington. Just ask an employer with millennial employees, she said.

Zach Johnson, CTA's 30-year-old executive director, said the church as an institution is "a bit of an afterthought" for younger Catholics, who don't ask permission from bishops or pastors or even reform organizations.

Which is not to say that institutions, including the church, don't have power, Johnson said. "It's obvious that the institution still hurts a lot of people and has tremendous power to do good and bad," he said. 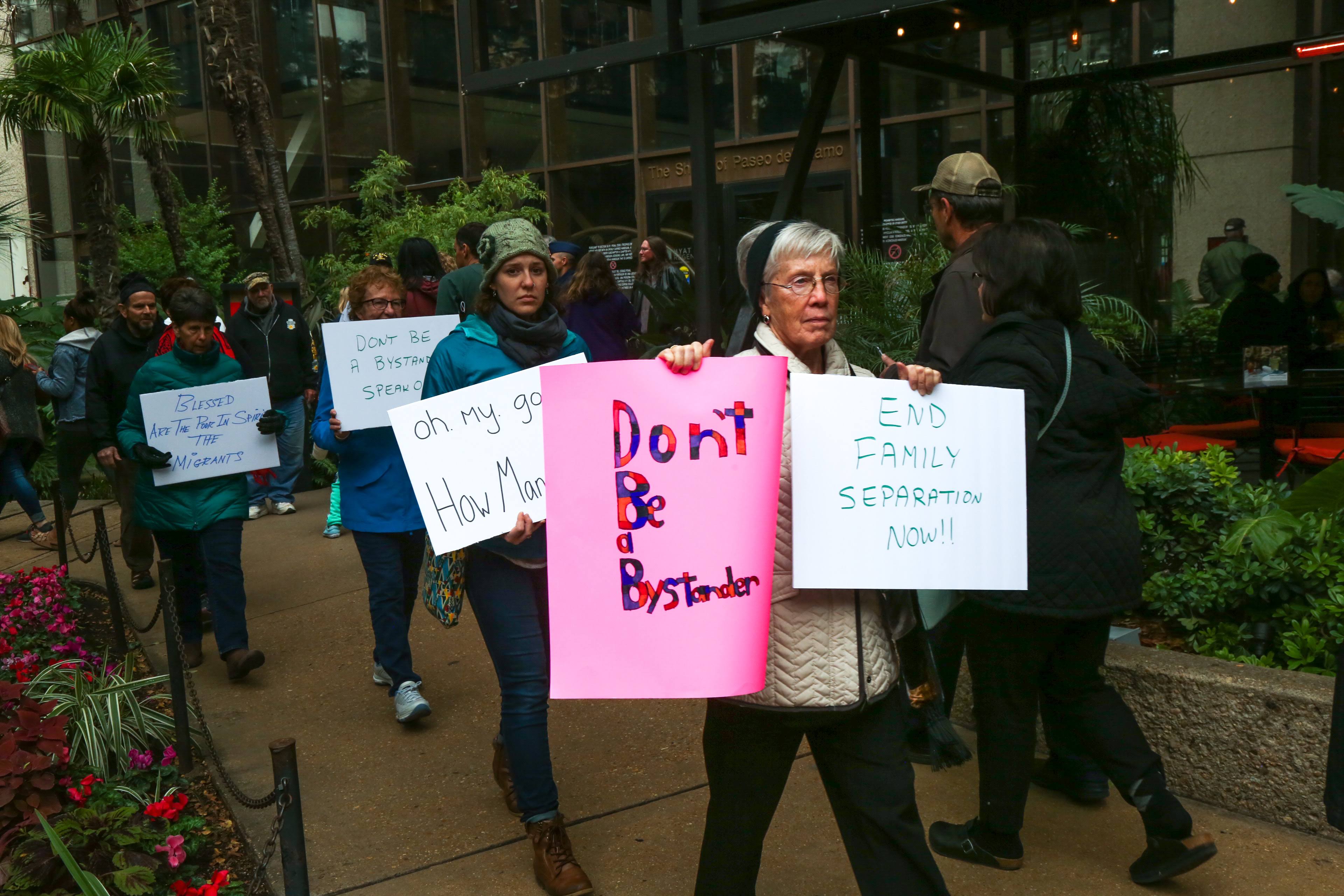 CTA members of all generations gathered together in protest along the San Antonio River Walk during the 2018 national conference. (Deborah Winarski)

"But for the way people practice church on the day to day, the institution means less than it used to," he added. "We're building our own things. … It doesn't matter that the institution doesn't sanction it, because we don't care about that anyway."

If he were giving advice, Dinges would suggest accentuating Catholicism's positives — Catholic Social Teaching, our sacramental sensibility, Pope Francis and his emphasis on inclusiveness rather than finger-shaking — to attract more young Catholic progressives. Conservatives, on the other hand, seem to be playing the us-versus-them card, which sociologists say does build internal cohesion in a group.

Killen would encourage older Catholics — in CTA and elsewhere — to listen to the faith and justice questions of younger people. This can be a challenge for baby boomers, who as an outsized generation have driven the narrative for most of their lives.

The question, said Killen, is "How will the elders in Call to Action, or any other Catholic reform organization, learn how to be gracious and generative and supportive toward a future that is not going to be defined by them or in the terms that are most comfortable to them?"

A spirituality of later adulthood can take inspiration from the image of the "nurse log," Killen said, in which a fallen, decaying tree facilitates new life. She cites women's religious communities at having done this well.

"The faith challenge to the elders is really a challenge to allow their imaginations to be expanded," said Killen.

That's how the partners within CTA's Re/Generation program describe the two-directional mentorship that is part of the program. "It's not just that the older generation has all the answers, and we need to learn," said Claire Hitchins, who oversees Re/Gen for CTA. "We honor that wisdom, but also have a platform from which [young people] can bring their own wisdom as well."

Ruby Fuentes, a member of the second group of Re/Generators, believes her generation and that of the "civil rights era," have a lot in common. "We both have that energy and the coraje ("courage")," she said. "The generation gap is kind of non-existent. We see eye-to-eye and encourage and empower each other."

Marianne Duddy-Burke, executive director of DignityUSA, an organization for LGBTQ+ Catholics, was able to listen, brainstorm and offer resources to her mentee, but she also was inspired by the "expansive vision of church" of the younger Catholics in the program. 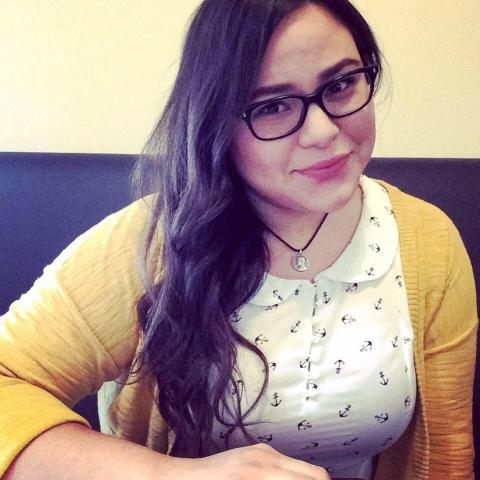 "For them, the boundaries and the borders between denominations and roles are really blurring," said Duddy-Burke, who sees the younger generation "inviting us to come along" to their new vision of church, she said.

Her organization, which is preparing to mark its 50th anniversary this year, is also "being stretched" by younger Catholics, who have grown up with a more fluid experience of gender and sexuality and, for the most part, a culture that is accepting and affirming, she said.

But will this generation's reformers even see church reform in the same way? Likely not, as their experiences of injustice are different, said delfin baustista, another 2019 Re/Generator.

"Not better or worse, just different," they said, adding that the focus might shift from emphasizing "oppression" to focusing on "resilience and liberation." Social media — such as hashtag movements — will also alter how new generations "do" reform.

bautista is hopeful that reform-minded Catholics of all ages will have "an openness and willingness to engage and recognize we all have a role to play."

Saavedra, too, predicts the influx of younger folks will literally "regenerate" the organization and movement. "Maybe we won't be the same organization we started out to be," she said. "But I believe in miracles. I believe we will be finding new ways."

[Heidi Schlumpf is NCR national correspondent. Her email address is hschlumpf@ncronline.org. Follow her on Twitter @HeidiSchlumpf. She was a keynote speaker at the 2018 national Call to Action conference.]

A version of this story appeared in the June 14-27, 2019 print issue under the headline: At Call to Action, younger leaders are reimagining church reform.