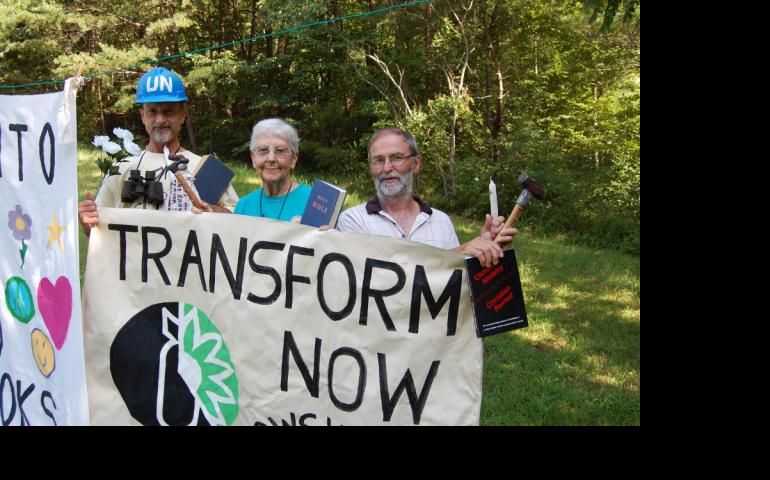 Three Catholics broke into a guarded nuclear weapons complex in Tennessee on Saturday in an act of civil disobedience and made their way outside of its most secure facilities before they were arrested.

The three, an 82-year-old religious sister and two middle-aged men connected with the Catholic Worker movement, were able to enter the Y-12 National Security Complex in Oak Ridge early Saturday before a guard found them outside the complex's storage facility for bomb-grade uranium.

The three call themselves the Transform Now Plowshares and said they wished to "indict the U.S. government" for its nuclear weapons modernization program and for planning to build a new facility at the Y-12 site, according to friends of the activists.

The facility is responsible for the maintenance and production of the uranium components for the country's nuclear arsenal as well as for some nuclear reactors and medical research.

In the last several years, activists in the area have been protesting a planned new facility for the complex, called the Uranium Processing Facility, which the National Nuclear Security Administration says is needed to replace aging buildings and facilities, some of which date to 1945.

Federal estimates have placed the price tag of the new facility, one of three planned by the security administration, at about $6.5 billion.

Ralph Hutchison, the coordinator of a local group opposing the Tennessee facility's construction, told NCR on Tuesday that the three activists wanted to say "the world should pay attention to what's happening here because it's a violation of all that's right and just and holy, and international law and God's law."

A federal spokesman for the nuclear facility said the break-in was a "serious matter."

"The protestors essentially penetrated one of our outer defensive layers and actually got in and defaced the walls of the facility known as the Highly Enriched Uranium Materials facility," said Steven Wyatt, a spokesperson for the security administration at the nuclear site.

The facility, Wyatt said, opened in 2010 and is where the complex stores enriched uranium.

"It essentially was built from the ground up to store and secure nuclear materials. It's probably the strongest building of its type in the world," Wyatt said. "We're doing a top-to-bottom look at the whole issue, what happened. Certainly we will learn from what took place and improve the security at the plant."

According to reports in the Knoxville News Sentinel, which first covered the protest, the activists were found outside the facility after they had hung banners, splashed blood and painted messages on the wall of the storage site.

Before they were arrested, the activists offered to share bread with the guards at the site and sang, the News Sentinel reported.

In an email to supporters Monday, Hutchison said the activists -- Sr. Megan Rice, a member of the Sisters of the Holy Child Jesus; Michael Walli, a member of the Dorothy Day Catholic Worker community in Washington, D.C.; and Greg Boertje-Obed, a former U.S. Army officer from Duluth, Minn. -- made their first court appearance that morning in the U.S. District Court of Eastern Tennessee in Knoxville.

According to court documents, each is accused of unauthorized entry into the facility and is accused of possible violation of three federal statues regarding trespass on sites regulated by the Nuclear Regulatory Commission or the Department of Energy.

When they were brought before Magistrate Judge Bruce Guyton, the three asked why similar charges were not being brought against the nuclear facility, Hutchison wrote in his email.

Walli said, "I note the charge listed relates only to what I have done and does not include the illegal nuclear weapons production taking place at Y-12," Hutchison wrote.

The name the activists chose for their action, Transform Now Plowshares, references a number of actions against nuclear weapons taken by Catholic activists in the last three decades, referencing the exhortation found in the books of Micah and Isaiah to turn swords into plowshares and spears into pruning hooks.

The first such action, organized partly by Jesuit Fr. Daniel Berrigan and his late brother Philip Berrigan, occurred in September 1980, when the brothers and six others trespassed onto the General Electric Nuclear Missile facility in King of Prussia, Penn., where they damaged nuclear warhead nose cones and poured blood onto documents and files.

In the documents provided to the media about their action, the Transform Now Plowshares activists say they felt compelled to protest the facility "because our very humanity rejects the designs of nuclearism, empire and war."

"Our faith in love and nonviolence encourages us to believe that our activity here is necessary," the activists wrote. "That we come to invite transformation, undo the past and present work of Y-12; disarm and end any further efforts to increase the Y-12 capacity for an economy and social structure based upon war-making and empire-building."

The activists said they brought a number of "life-symbols" with them in the break-in, including blood, hammers, flowers, crime tape, a Bible and bread.

The blood, they say, was "for healing and pouring out our lives in service and love. Our very humanity depends on lives given, not taken. But blood also reminds us of the horrific spilling of blood by nuclear weapons."

Each of the three statutes under which the activists are currently accused provides separate penalties, with the most severe being a fine up to $100,000 and imprisonment of up to a year.

Their charging documents describe the three as "willfully and without authorization entering upon the property" of the complex by "crossing the perimeter fence and barrier" then crossing through "three more fences further onto the property."

The activists' next hearing has been set for Thursday. They are currently being held in the Blount County Detention Facility in Maryville, Tenn.

In the documents explaining their action, the activists said the continued use of the facility is an "ongoing criminal endeavor in violation of international treaty law."

"The ongoing building and maintenance of Oak Ridge Y-12 constitute war crimes that can and should be investigated and prosecuted by judicial authorities at all levels," the activists wrote. "We are required by International Law to denounce and resist known crimes."

Wyatt said the protestors' concerns about the direction of the county's nuclear weapons policy and its plan to develop a new facility at the complex in Oak Ridge should be directed to policy-makers.

"Our job here is to carry out the complex manufacturing kind of jobs involving uranium and other materials that the nation needs," Wyatt said. "Our job is to carry out those responsibilities. In terms of the policies of the U.S. government in terms of where we're going with the stockpile, that's a question for the people in Washington."

For other stories covering the nation's nuclear weapons complex, see:

For more on the Oak Ridge protests, see:

Caught in the crossfire