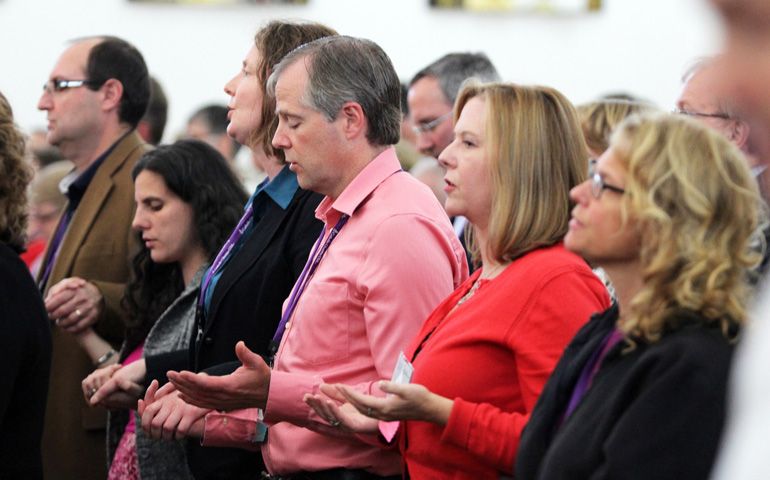 Charlotte, N.C. — Fr. Larry Snyder's 10 years of service as president of Catholic Charities USA are made up of countless "moments," he said, that illustrate how the national network of local agencies are working to "bring about a society that cares for all God's children."

The priest made the comments during the annual Catholic Charities gathering Oct. 4-7 in Charlotte.

Snyder will leave the post in February to become vice president for mission at the University of St. Thomas in his home St. Paul-Minneapolis archdiocese.

In his keynote address Oct. 5, Snyder reminisced about his 10 years as president, recalling that he came aboard just before Hurricane Katrina demolished New Orleans and the Gulf Coast in 2005.

"In the past 10 years, I've visited almost every state in the union, and my office is full of mementos that local agencies have given me that are a daily reminder of the many places that I've been, but more importantly, they are a reminder to me of the incredible work of our agencies that I have witnessed," he said, showing photos of various items in his office he'd collected or been given over the years.

"One of my most treasured items is this wall hanging. That might not look like much to you, but it is constructed out of wood and tin from houses that were destroyed in the Lower Ninth Ward of New Orleans," he said. "So, to me, it represents the pain and the hope and the resilience of the human spirit that I was privileged to witness after Hurricane Katrina."

Other mementos include a depiction of Christ as a Native American wrapped in a Navajo blanket, given to him by Catholic Charities in Rapid City, S.D., that "is a reminder of the great diversity of the people that our member agencies serve, and that in each one of them, we can recognize the face of Christ," Snyder said.

Another is a second edition volume from 1889 of the life of Pope Leo XIII, the pope who inspired modern Catholic social teaching with the encyclical Rerum Novarum. The book was given to him by Catholic Charities in Santa Rosa, Calif., he said. "It was a gift that causes me to reflect on the rich tradition of our faith and the tremendous resource of years of Catholic social teaching."

"These mementos tell great stories and remind me of not only the friends I made and the amazing individuals I had the privilege to meet in these past 10 years, but they are also constant reminder of what I call 'Catholic Charities moments,' " Snyder said.

"I suspect that most of you know exactly what I mean when I talk about Catholic Charities moments. When a family returns to an agency years after being helped with rental assistance and proudly shows off the keys to their new house. When a young man speaks about the mentorship of a Catholic Charities worker that helped him become the first in his family to attend college," he said.

"These Catholic Charities moments can be large or small, but they are always a humbling reminder of what could happen when people inspired by the Gospel dedicate their lives to serving those in need."

But Snyder warned against self-congratulation and nostalgia. Rather, he said, the time attendees spent together in Charlotte was "a chance to stand together and look toward the future to change the pace, to set a new course, to address contemporary challenges, and seize the opportunities presented to us."

Catholic Charities, of course, "finds its inspiration and reason for being at the heart of Jesus' teachings," he said.

"Pope Francis constantly reminds us to be witnesses to that Gospel message in society. And his leadership exemplifies what it means to take the love of God to the sick, suffering and the rejected. He encourages us to go into the dirtiness of the streets and to the messiness of life, to be with the sheep. We do this, Pope Francis tells us, and we may end up smelling like the sheep."

In its 2014 annual report, Catholic Charities USA noted that its network of agencies served nearly 17 percent more clients last year than it did before the recession.

The "Help and Hope Report" said the more than 17.2 million total services provided by agencies from Guam to Maine are the most ever recorded -- a 24 percent increase from 2007. At the same time, the total number of clients served has fallen slightly from the record high of nearly 10.3 million in 2010, to approximately 9 million clients served in 2013, it noted.

Catholic Charities Oct. 5 gave Snyder its highest honor, the Vision Award, for his decade of leadership and exemplary service. In addition, the creation of the Fr. Larry Snyder Disaster Relief Fund was announced. It will be used to support Catholic Charities' ongoing efforts to assist those affected by natural and man-made disasters.

Snyder stepping down as president of CCUSA