Catholic leaders get personal over threat to DACA 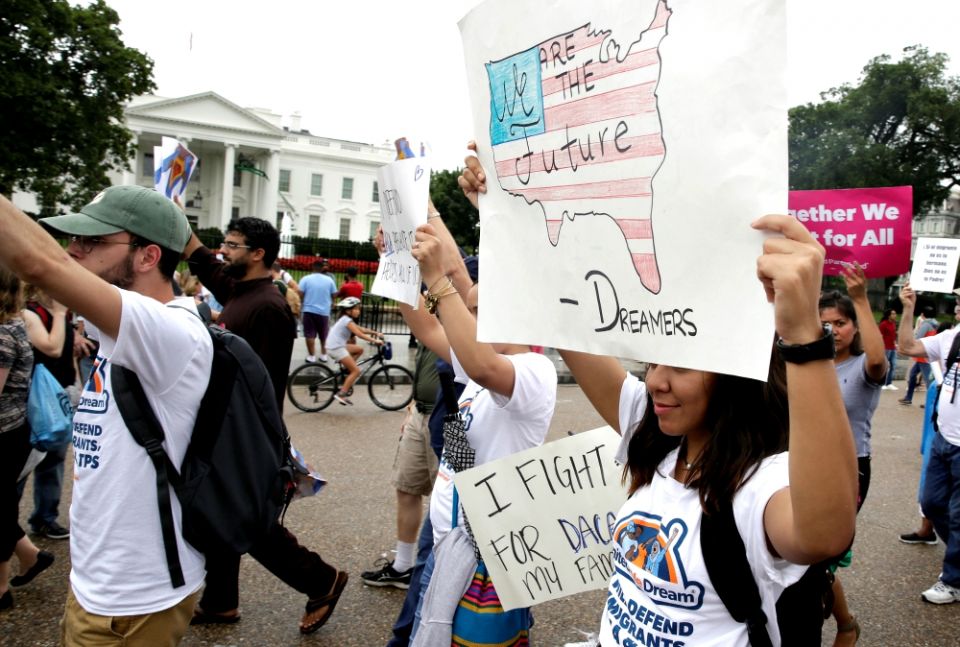 People march outside the White House Aug. 15 at a rally calling on President Donald Trump to protect the Deferred Action for Childhood Arrivals program, known as DACA. (CNS/Reuters/Joshua Roberts)

The criticism of the Trump administration's immigration policy from Catholic leaders and organizations is becoming more pointed — and personal.

On Tuesday, Aug. 29, Bishop Mark Seitz of El Paso, Texas, and others in a phone conference with reporters called out Trump's chief of staff, Gen. John Kelly, asking him to shield Deferred Action for Childhood Arrivals, known as DACA. The policy protects from deportation up to 800,000 young people who were brought to the United States as children. Begun five years ago under President Barack Obama, the program allows those with DACA status to legally work in the United States, but Trump is considering ending it, possibly within days.

Church leaders often take pains to avoid singling out individuals when criticizing civil leaders, but Seitz said the calls to end DACA — including the threat of a lawsuit if Trump doesn't — are so unjustified that it merited calling out Kelly specifically, because he is a prominent Catholic in the Trump White House. 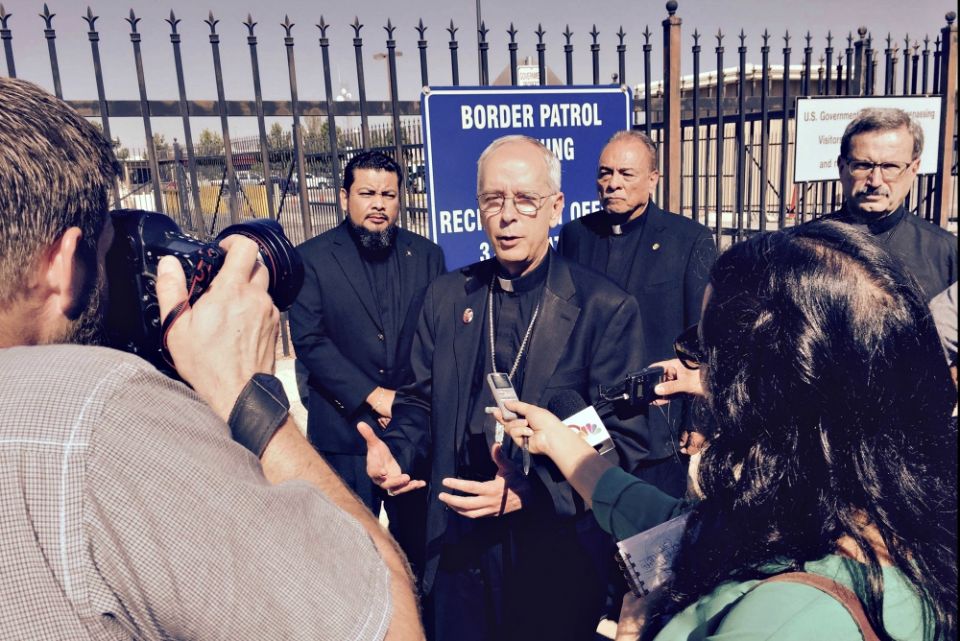 Bishop Mark Seitz speaks to reporters before attending an Aug. 7 meeting with immigration officials to try to stop the imminent deportation of Maria De Loera, whose 8-year-daughter is in a Texas hospital being treated for bone cancer. De Loera, the child's only caretaker, was granted a six-month stay from deportation Aug. 8. (CNS/Courtesy of Dylan Corbett, Hope Border Institute)

"Christians are fundamentally a loving, forgiving people, but there are some things that angered Jesus and they should anger us, as well," Seitz said. "Some things should anger us enough to have the courage to speak out to people against their politically motivated assaults."

Lawmakers in 10 states have given the Trump administration until Sept. 5 to end the program or they will file a lawsuit, potentially in the same federal court where they successfully argued for striking down an expansion of the program, the Associated Press reported.

"These children, in most cases, were brought here in order to save their lives," Seitz said. "They didn't make this choice, they are innocent." 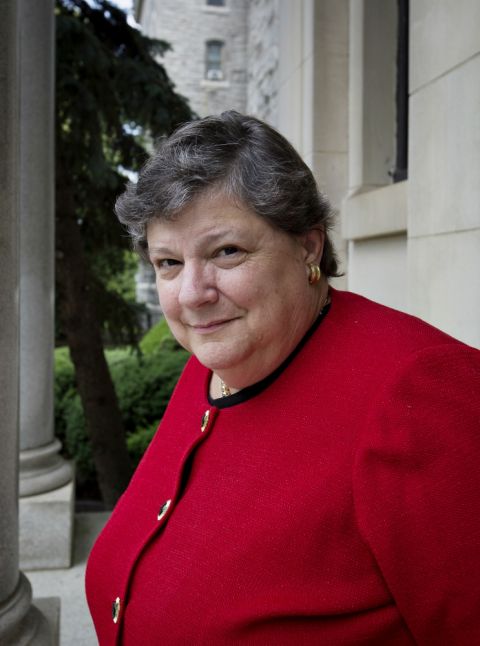 Trinity Washington University President Patricia McGuire said about 10 percent of the undergraduate class at the women's college in Washington, D.C., are "Dreamers," or students currently protected by DACA.

"These young women are extraordinary, they are some of the best students we've had at Trinity," McGuire said. "They love this country, they love being here, they are as American as anyone else. To harm these young women in any way would be an atrocious rejection of American values."

One of those currently protected by DACA is José Cabrera, a senior at Xavier University in Cincinnati, who was brought to the United States from Mexico by his mother when he was 4 years old.

"I really want to ask our leaders in D.C. — do you want my talent to leave this country? And not just mine but at least 800,000 other students?" Cabrera said. "We work here, we have our homes here. Going back to being undocumented would be so bad that a lot of people are looking at just taking their talents and going elsewhere."

Cabrera said America is his home and he has never known life anywhere else.

"I've grown up here. I don't know any other country ... Cincinnati is my hometown," he said. "It's really hard to know that the country I love so much ... believes that just because I came to this country, that I'm not an American or don't have the right to be here."

If DACA ends, the talent and skilled workers the United States would lose would be profound, said Mark Kuczewski, a professor of medical ethics at Loyola University Chicago. He said about 30, or 5 percent, of the students in Loyola's medical school have DACA status.

"They have stellar qualifications. They are from 17 different countries, but they are Americans. And they're bilingual, so they can serve underserved populations," Kuczewski said.

One student talked about not understanding why other children could go to a pediatrician, but she could not, only to learn later it was because she was undocumented. Now, Kuczewski said, she wants to be a pediatrician to serve children like herself.

"If they can't work here, they'll have medical degrees but won't be able to go on to residencies and treat patients," he said. "We really urge our legislators and the Trump administration to consider what they'd be throwing away."

Jesuit Fr. Timothy Kesicki, president of Jesuit Conference of Canada and the United States, said more than 1,100 educators in Jesuit colleges and universities have signed a letter to Kelly urging him to fight for DACA. 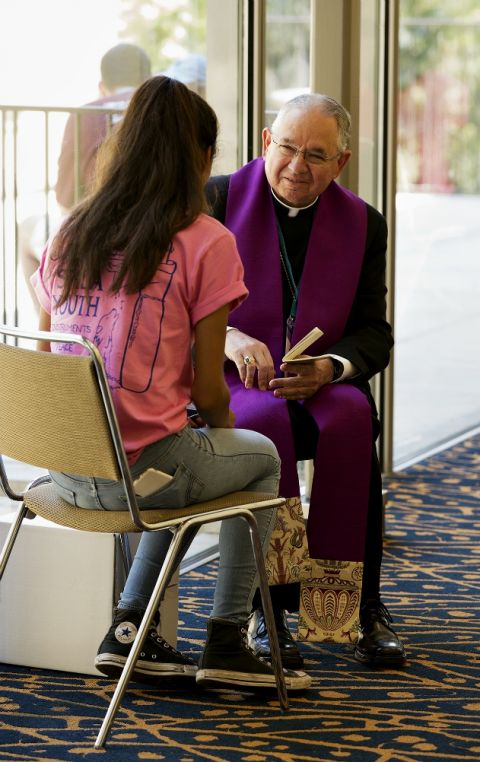 He said that when Jesuits were in Rome a year ago to elect a superior general, Pope Francis encouraged them to have "courage and audacity" in preaching the Gospel, which requires standing up for justice.

"Dreamers are woven into our schools," Kesicki said. "I've seen it personally."

"We need to keep in mind that beneath all the politics, there are real people, real issues and legitimate differences of opinion. That should not be an excuse for inaction. It should be the reason for coming together and finding a way to move forward," he wrote. "We can begin right now by resolving the situation of the DACA young people. It would be a tragedy to cancel DACA and declare these 800,000 young people 'illegal' and begin deporting them."

The Franciscan Action Network, along with a coalition of faith-based organizations, has been holding a vigil at the White House to support DACA, as well as temporary protected status, which allows people who were in the United States prior to a natural disaster to remain in the country until their homeland has recovered. Temporary protected status for Haitians affected by an earthquake, a cholera epidemic and a hurricane could expire in January.

The coalition on Aug. 30 will announce a week of fasting and prayer in support of the programs.

"It's not just about these 800,000 young people, but young people who are working, paying taxes, going to school and serving in the military," said Franciscan Action Network executive director Patrick Carolan told NCR. "The question is, what kind of nation are we? Can we be a moral nation when we're talking about deporting people like this?"

Justice | Catholic leaders get personal over threat to DACA