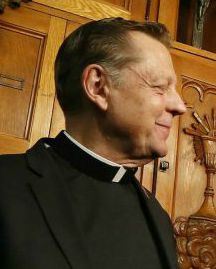 "We need some wins now and again. We need some victories now and then in this battle. But while we're running the victory laps, the fight continues," Fr. Michael Pfleger, pastor of St. Sabina Parish, said in his homily Oct. 7.

Two days earlier, a jury found Chicago Police Officer Jason Van Dyke guilty of second-degree murder and of 16 counts of aggravated battery in the Oct. 20 shooting of 17-year-old McDonald. Although the shooting was originally ruled justified by the police department, a dash-cam video released a year later showed the boy walking away from police when he was shot.

Pfleger, as well as Chicago Cardinal Blase Cupich, had urged calm in advance of the Oct. 5 verdict. Pfleger had called for a peaceful boycott of the city if Van Dyke was found not guilty.

In a statement before the verdict, Cupich urged Chicagoans to "pray and not strike out. To extend our hands in friendship not in hate. To gather in in our mutual pain and ask the Lord and each other for the balm of tolerance and love."

Although most activists were pleased with the verdict, Pfleger noted that parishioners should "keep up the pressure to make sure that [sentencing] is not a slap on the wrist."

The penalty for second-degree murder can be as light as probation, but aggravated battery carries a minimum of six months of jail time. However, the 16 sentences may be applied concurrently.

"There's much work yet to do. We can't give up the fight," said Pfleger. "There are a thousand other Laquans in our community, struggling to live, struggling for purpose."

Pfleger has been a long-time leader of social justice activism in the city. Earlier this year, he led a controversial anti-violence protest that closed down a major Chicago freeway and called for greater equality for the south and west sides of the city.

"When I woke up Saturday morning, and looked out the window, we still had the tale of two cities," he said in his homily.

But as people of faith, violence is never an option, he said. "Because if we are violent, then we become just like Van Dyke."

Instead, he called for forgiveness — but a type of forgiveness that keeps up the fight for justice. "People of faith must move forward in healing and forgiveness," he said. "I forgive you for what you have done, but I'll fight you till you get it right."

He also urged parishioners to "build a bridge" with each other and with law enforcement.

"We're the people of the kingdom of God," he said. "We will not allow the world to define what we do and how we act with one another."