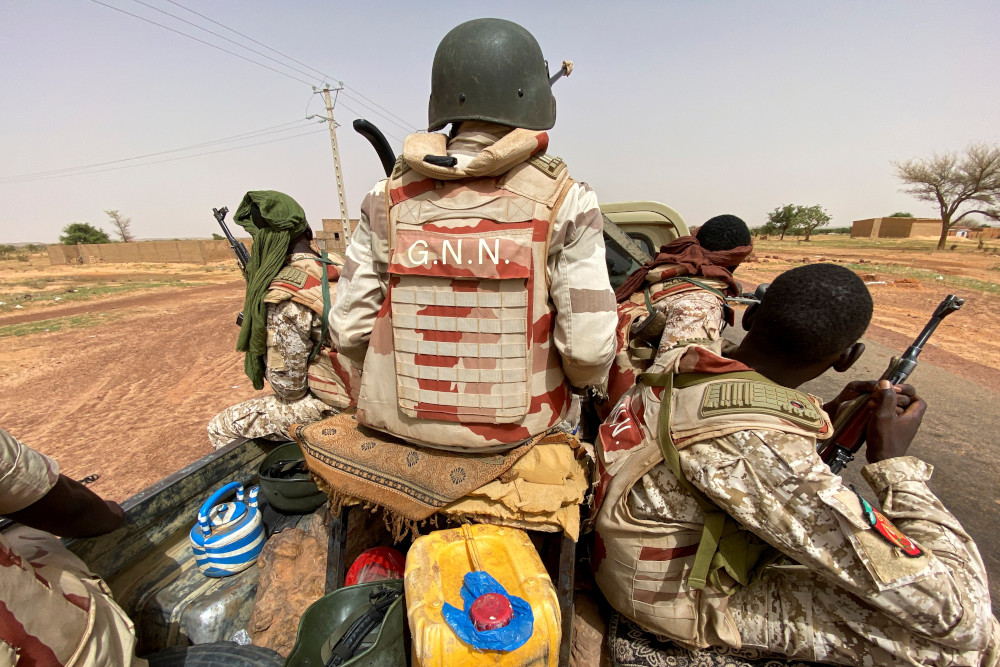 A convoy of Nigerian soldiers patrol outside the town of Ouallam July 6, 2021. Church leaders are pushing to expand their peacekeeping role in Africa. (CNS/Reuters/Media Coulibaly)

Church representatives from French-speaking Africa have urged closer regional cooperation in Catholic peacebuilding to offset mounting economic and security challenges across the continent.

"The church frequently speaks out against government corruption and failure to settle conflicts — but it's simply ignored," explained Stephen Hilbert, adviser for Africa and global development for the U.S. bishops' conference.

"Meanwhile, the church often isn't even invited to peace negotiations. Given that it's the most vibrant, trusted, balanced and nonpartisan entity in Africa, this is very frustrating," he said June 27, after chairing a panel of peacemaking experts from Burundi, Niger and Congo during a four-day online conference.

He said the Catholic Church in much of Africa was uniquely placed to assist peacemaking, but also found its proposals routinely ignored by international organizations and Western governments, including the United States.

"Many NGOs could achieve great things with church support, but with their secular outlook, they often don't see this," said Hilbert, who spent 22 years in Africa with Catholic Relief Services.

Hilbert told Catholic News Service numerous Catholic and interfaith peacemaking initiatives tended to be "small-scale and geographically limited," adding that governments in Nigeria and elsewhere had faced accusations of "unwillingness and inaction" when it came to engaging with the church.

"The U.S. government gives a lot to the church, but usually for concrete projects in such fields as health, water and sanitation. When it comes to anything political, it's concerned to avoid accusations of one-sidedness," he added.

The June 20-24 conference, "Catholic Peacebuilding in Times of Crisis," was attended online by around 1,000 people and addressed by 75 experts from 30 countries, including Archbishop Gabriele Caccia, the Holy See's representative to the United Nations; Archbishop Luis José Rueda Aparicio, president of Colombian bishops' conference; and Cardinal Charles Bo of Yangon, Myanmar, president of the Federation of Asian Bishops' Conferences.

It was hosted by the Catholic Peacebuilding Network, housed at Notre Dame University, in collaboration with the Vatican Dicastery for Promoting Integral Human Development, Caritas Internationalis and two dozen Catholic universities and organizations. The conference took place as problems of climate change, economic dislocation and armed rebellion looked set to be exacerbated by crippling food shortages because of the war in Ukraine.

Jesuit Fr. Rigobert Minani, regional coordinator of the Ecclesial Network of the Congo Basin Forest, told the conference the church's frequent absence from regional peace conferences in Central Africa and the Sahel region prevented it from raising key issues such as human rights violations, victim protection, justice and war reparations.

"In most conflicts, the actors aren't just armed groups, but governments themselves," said Minani, who also heads the social apostolate of the Jesuits' Central Africa province.

"Difficulties arise where bishops' conferences don't have the same capacity to influence political and social leaders, thus creating imbalances in the church's national and regional engagement." He said in Congo, Burundi and Rwanda, the church has been very active at grassroots level, but had little impact on the major state actors at a regional level.

Archbishop Djalwana Laurent Lompo of Niamey, Niger, was installed in June 2015, six months after most churches were destroyed in anti-Catholic riots. He said his own church was working through the Catholic charitable agency Caritas "to make people actors for peace at all levels."

However, he added that social and economic activity remained impossible in areas bordering Mali and Burkina Faso, where Islamist attacks had left 1.5 million people displaced with little access to aid.

"The violence here has complicated interreligious dialogue, but also impelled us to be actors for peace, harmonizing efforts and preparing hearts for avoiding future conflict," said the archbishop.

"We are all being attacked now by the same forces, using the same strategy, and our political authorities have seen the importance of Christian-Muslim dialogue in struggling against this scourge, especially when ignorance about our own religious faith and practices led to such violence in the past. But we still need to do more, moving from words to action in our search for peace."

However, he added that each country "understood its internal situation differently," and he said shared projects often ended when conditions outwardly improved, leaving deeper issues unresolved.

"Some countries have experienced terrible events for decades, without having any capacity to take charge and formulate solutions," the Dominican told the conference.

"In their mission of human and spiritual accompaniment, churches and religious confessions, even if lacking technical means, have had to work for a healing of memories, while mediating against political manipulation and fostering civic education through advocacy and common action."