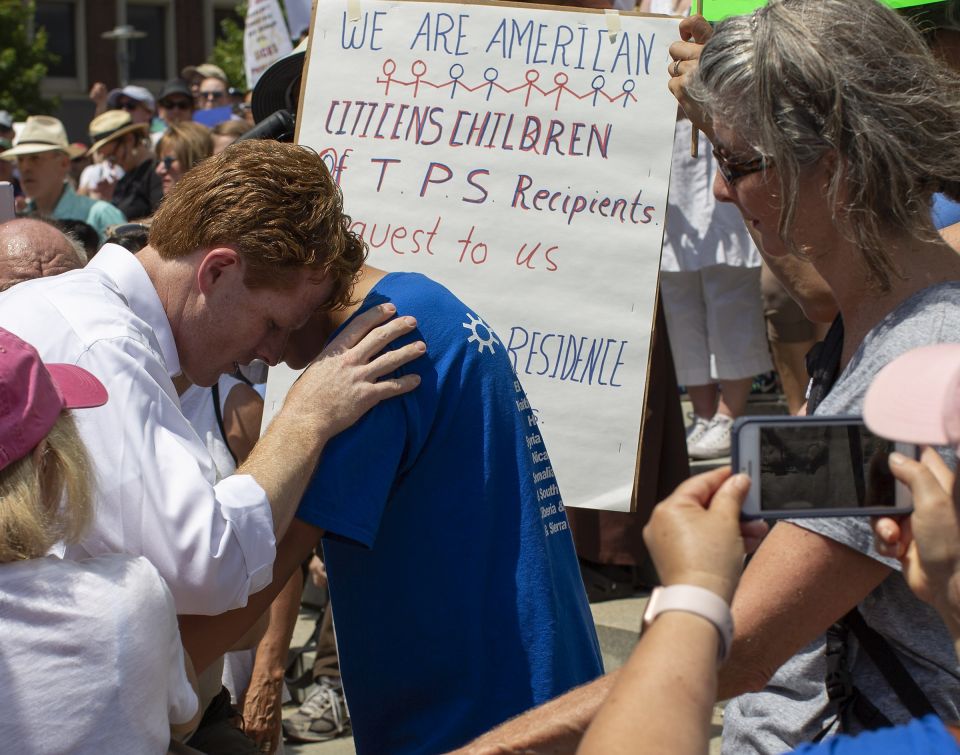 Washington — Some attended the rally with hard hats on as others spoke about how an immigration program in peril helped them over the years pour millions into the U.S. economy, and also contributed to their role in physically rebuilding the country's iconic structures and cities after disasters.

"Honest workers who have been here more than 20 years rebuilt the Pentagon [after the 9/11 attacks], New Orleans and now Houston," Edwin Murillo, of the National TPS Alliance, said Sept. 25, speaking at a rally about migrants protected by a program known as Temporary Protected Status, or TPS.

Some beneficiaries, who have worked as construction workers, hotel workers, nurse's aides and caretakers, looked on nearby as Murillo spoke near the base of the U.S. Capitol in Washington.

Those who gathered at the rally called on Congress to help them keep benefits they have had for a decade or more under the program, which allows people from certain countries affected by humanitarian crises to legally live and work in the U.S. Like other immigration programs, TPS came under fire by the Trump administration, which has swiftly moved over the last year and a half to end it, threatening to take away work permits and legal documentation from some recipients.

Last year, the Department of Homeland Security, which administers the program, announced it was ending TPS status for recipients from Sudan, Nicaragua, Haiti and El Salvador in late 2018 and throughout 2019, saying conditions in those countries had improved and the migrants could safely return, even as the U.S. Department of State warned against travel to those nations. In May, the administration added Honduras to the list of countries for which it was halting TPS.

Donaldo Posada, an industrial bridge painter, TPS holder and father of three, who is originally from Honduras, said during the rally in Washington that returning to Honduras presents a difficult situation for him. Taking his U.S.-born children to his home country, often at the top or near the top of lists of most violent countries in the world, is not much of an option because it's dangerous and he worries for the safety of his family if he's forced to return, he said.

"I've lived [in the U.S.] more than two decades, I've paid my taxes, I'm a member of a union, and I'm equally involved in my church," he said.

Those like Posada weren't just asking to keep the temporary benefits but were pushing for more permanent measures that would keep them in the U.S., saying their economic, social and physical contributions to the country have made them citizens in every way except in their immigration status.

Some like Umaine Louis Jean, a TPS recipient and mother of two, took time off from work and family to travel aboard the National TPS Alliance bus that has taken its TPS recipient riders to different cities throughout the country to make their case with public audiences. Part of the Washington rally included welcoming those on the bus as they made a stop near the U.S. Capitol.

Jean, originally from Haiti, has been in the U.S. for 22 years, has two U.S.-born children as well as a husband who's a U.S. citizen. But she and other members of her family born in Haiti now find their lives in the U.S. under threat as their TPS status is set to end in July of next year.

"We deserve something better," she said. "We are fine people and now [the Trump administration] is trying to divide our families. We are good people."

Isabel Hernandez, originally from El Salvador, boarded the bus when it began its journey in Los Angeles in mid-August and said she wanted to offer her testimony to anyone who wanted to listen because she doesn't want to be separated from her four sons who live in the U.S., if her TPS permit expires. Those on the bus often stopped to visit with church groups, including at Catholic churches in the U.S., she said, telling their stories to gain support from the general public along the way.

"Only God knows how much I've suffered," Hernandez said.

When she was able to secure a working permit through the TPS program, "I was so happy," she recalled.

"I wasn't going to be illegal anymore," she said.

But now she's contemplating what to do if TPS for El Salvador is revoked and leaving her family seems like too difficult a choice to make.

Nelsy Umanzor, a hotel worker and TPS holder from Maryland, said he joined the delegation that spoke with lawmakers on Capitol Hill Sept. 25. While some lawmakers said they supported their efforts, Congress didn't offer much hope on what can be done in the immediate future.

The U.S. Catholic bishops and other advocates for immigrants have issued numerous statements calling on the Trump administration to reverse  course on its decisions on TPS and asking Congress to keep TPS programs  in place, saying the future of TPS recipients and their loved ones is "an issue of family unity and human dignity."

TPS holders are hoping for reprieve by the courts and are closely watching upcoming decisions in cases filed by different states questioning the administration's decision to end the program. Even if the program continues, those like Umanzor, said what they ultimately want is a more permanent solution, not just a renewable permit.

Though they have little hope to achieve any decision with this session of Congress, the TPS holders present at the rally said that even though they want immediate action, they will return to speak with a new set of lawmakers that may be selected during the November mid-term elections.

"We will return in January," said Umanzor. "And we'll return to raise their consciousness."

Hondurans, Nepalese will remain in U.S. under temporary protected status