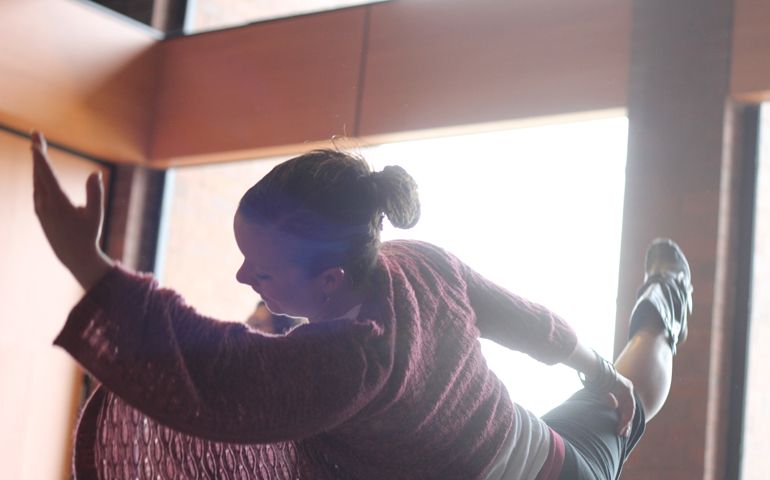 Overland Park, Kan. — On Valentine's Day, approximately 30 people danced and clapped around a room at Johnson County Community College to rise up against violence against women.

Students, faculty and local community members danced to commemorate the 15th annual V-Day, a campaign that raises awareness each Feb. 14 about violence against girls and women. The global movement is inspired by activist and Tony Award-winning playwright Eve Ensler, author of "The Vagina Monologues."

The movement's new campaign, One Billion Rising, invited people all over the world to stand in solidarity with women and girls by rising up and dancing.

Chemistry professor Gina Egan said plans for the February event began in early January. It is the first time the college has hosted a V-Day event, she said.

The event was sponsored by the college's Amnesty International group, which was formed this year under the supervision of psychology professor Diane Kappen.

Ellen Sheppard, a junior studying environmental science, became involved with Amnesty International earlier this semester. Both Sheppard and Kappen said they believed joining in the One Billion Rising movement was a necessary step for an Amnesty International group to lift off the ground at the college.

"This issue needs to be addressed," Sheppard said. "This is a human rights issue; this is a women's issue."

As people started to arrive at the college's student center and music played over speakers, people were invited to dance in their own way. People of all ages danced alongside each other.

"I am here today because I want violence against women and children to stop," Egan said in conclusion. "We need it to stop. And I know it will only stop when we start acknowledging it, start talking about it, and start rising up against it."

"We need to join together, sisters and brothers, and say, 'This is not acceptable,' " Egan said.

As people clapped and cheered for Egan's short speech, the dancing resumed.

The college will also present a March 30 benefit reading of "A Memory, A Monologue, A Rant and a Prayer: Writings to Stop Violence Against Women and Girls," a collection of monologues by world-renowned authors and playwrights, edited by Ensler and Mollie Doyle.

Preparing in case of deportation