Curran: Abortion debate must consider 'freedom of the person' 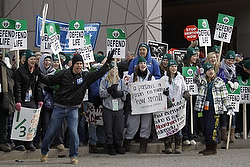 In the Nov. 26, 2010 issue of NCR, we published a talk -- "US Catholic Bishops and Abortion Legislation: A Critique from Within the Church" -- given by Fr. Charles E. Curran, Professor of Human Values at Southern Methodist University in Dallas.

Yesterday, Fr. John Yockey, a Wisconsin pastor who taught moral theology as an assistant professor at the Washington Theological Union from 1983-1992, responded to Curran’s remarks -- saying that current abortion law "condones an atrocity."

Below we have a response from Curran to Yockey's criticisms, in which Curran touches on his belief that the freedom of the individual person and the feasibility of anti-abortion legislation should have more consideration in the debate.

I thank John Yockey for his response that combines courtesy and respect with his disagreement. Would that all our discussions within the Catholic Church could be carried on in the same spirit.

The thrust of my essay and the only point I attempted to prove is that the U.S. Catholic bishops have claimed too great a certitude for their position supporting a law against abortion. My paper explicitly dealt with this issue from within the parameters of Catholic Church teaching and tradition. The precise issue involves how the bishops in their teaching role relate to issues of law and public policy.

This issue came to the fore in the Catholic world when the U.S. bishops and other bishops’ conferences were writing pastoral letters on peace and war in the 1980’s. At a Vatican meeting led by then-Cardinal Ratzinger, it was pointed out that when prudential judgments are involved, a Catholic can legitimately disagree with the teaching of the bishops.

There is room for legitimate diversity within the Church on such issues. A central point in my essay maintains that the issue of abortion legislation entails such prudential judgments.

In his response in two different places Yockey recognizes that prudential judgments are involved in abortion legislation.

“Even when making prudential judgments about legislative strategy,” he insists that the assent owed a strong specification of infallible moral teaching must remain in the forefront of practical considerations. “While prudential judgments legitimately vary about how best to effect change,” he says my approach ignores the dominant ethos in secular America.

Without doubt, there are different prudential judgments that can and legitimately have been made about the best way to reduce the number of abortions in the United States.

The leadership of the U.S. bishops in 1981 supported the Hatch Amendment, which did not call for a constitutional amendment to overturn the Roe v. Wade decision and even if passed would still result in many legal abortions. Some anti-abortion activists condemned the bishops for caving in by not supporting an absolute ban on abortion.

I illustrated my argument with the example of two well-known U.S. Catholic figures who from a moral viewpoint strenuously oppose abortion, but decided that support of a pro-choice candidate would actually reduce the number of abortions performed in the United States.

They came to the conclusion that despite all these years it is impossible to pass a constitutional amendment repealing Roe v. Wade or any other significant anti-abortion legislation on a national level. A truly pro-choice position would give the women involved the financial help and support they need to make a decision not to abort.

Since poor women choose abortion at a much higher rate than other women, such an approach would definitely cut down on the number of abortions in this country.

Everyone in the Catholic tradition admits that there is an important distinction between morality and law. The understanding of civil law as proposed in the Declaration on Religious Freedom of Vatican II recognizes that respecting the freedom of the individual person does not necessarily mean that one supports what that person does with their freedom. Thus pro-choice is not necessarily pro-abortion in all cases.

Prudential judgments are involved in this case because of the elements of the feasibility and possibility of passing different types of legislation. As teachers, the bishops have a real obligation today to state very clearly whether they would support only an absolute ban on abortion or whether they would accept an approach that would limit abortions. They did accept something quite short of an absolute ban when they endorsed the Hatch Amendment.

In light of the above reflections, I can briefly respond to the points made by Father Yockey.

I too have pointed out (even in a course I teach) the danger of individualism in our society. However, legislation is only a very small part of the whole of public life as acknowledged by the Catholic principle of subsidiarity.

Our churches, schools, corporations, colleges, voluntary organizations of all types, cultural groups, and the media, to name just a few, constitute the primary places where we should strive to overcome our one-sided individualism. In this much broader context, one piece of legislation plays a much lesser role.

Fr. John Yockey’s position is a very legitimate one within the parameters of hierarchical moral teaching, and he has defended it very well. However, there are other legitimate positions that can be taken by people who are morally pro-life.

We are pilgrim people living in a pluralistic and imperfect society -- and in an imperfect church! In this context, considerations of the freedom of the person, the feasibility of legislation, and the reality of compromise cannot be denied.

What to do about abortion laws? An NCR online discussion

Abortion debate must consider 'freedom of the person' by Charles E. Curran Feb. 23, 2011

Justice | Curran: Abortion debate must consider 'freedom of the person'