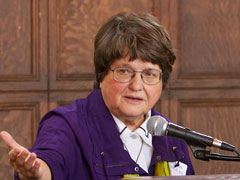 CHICAGO -- Inside a room on the third floor of the John T. Richardson Library at DePaul University is a display that includes some heavy boots and a thick belt -- not the kind for holding up pants, but rather the kind to which prisoners’ hands are shackled. They’re part of a small representation -- in this most unlikely place -- of the iconography of capital punishment in the United States.

The exhibit includes materials having to do with the book Dead Man Walking and the making of the movie of the same name. They were provided by the book's author, death penalty abolitionist St. Joseph of Medaille Sr. Helen Prejean, and they serve as a gripping introduction to the university's newly opened archive, "Social Justice Collections."

Prejean, who was on campus for several days in May to officially open the collections, is certainly one of the best-known, still busy figures who have agreed to have their papers archived at DePaul in a collection that is decidedly marked by Catholic activists of the Vatican II era. In many cases there is a seamless overlap with the civil rights and Vietnam War eras. For many, those periods are inextricably linked, the Second Vatican Council providing the framework for ordained and lay alike to exercise faith in a new and public way; the civil rights and Vietnam War eras waking up moral muscles that had remained dormant prior to the mid-1960s ecumenical council.

Vincentian Fr. Edward Udovic, secretary of the university and senior executive for university mission, has been involved in establishing the collection, which he said was the result of opportunism. For instance, someone in the ministry department was very close friends with the Jesuit poet and antiwar activist Fr. Daniel Berrigan. His papers had already been spoken for but the connection led to DePaul obtaining a portion of the archives of Berrigan's late brother and fellow activist, Philip, and those of Philip's wife, Elizabeth McAlister.

A Vincentian who was translating some of the work of the late Archbishop Oscar Romero of El Salvador led to a connection with Romero biographer Jesuit Fr. James R. Brockman, and DePaul's obtaining Brockman's research and documents dealing with the biography.

Among the documentation of groups and individuals being preserved are records of the Catholic reform group Call to Action, which is headquartered in Chicago. 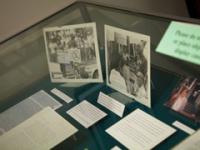 The connection with Prejean came through Professor Susanne M. Dumbleton of DePaul's School for New Learning. Dumbleton is in the process of writing a biography of the famous nun.

Udovic said DePaul is one of a number of universities gearing up to archive the papers and work of activists of the 1960s and '70s "because that generation is passing off the scene very quickly. "The major figures," he said, "are gone or leaving the stage."

Chicago, which in retrospect was a kind of seedbed for Catholic social justice activists, is a particularly ripe location for searching out such archives. He also believes that DePaul, which emphasizes that the archives are not just storage, but are intended for use by both scholars doing research and by students in the normal course of class work, is particularly suited to take up the effort. As if to punctuate that point with unambiguous symbol, a statue of Msgr. Jack Egan, a Chicago priest who was legendary for his advocacy of Catholic social thought, stands at the entrance of the student union.

In one sense, the archiving under way represents the final boxing up of an unusual era in the history of the U.S. church. But Udovic believes the era still has resonance: "Particularly the challenges of peace and war have not gone away. If you even look at the roots of environmental justice and activism, those obviously have emerged and have had to emerge." He mentions labor issues and the digital divide, as well as life issues, all entering "a new era" evident in the political debates of the day. All those conversations, he said, have roots in the activism of the past half century or so.

One need not go further than Prejean to establish the case that social activism that emerges from the Catholic community remains relevant. "There is no other individual in this country who comes close to" Prejean in advocating for those on death row, for victims' families and for traumatized prison workers and executioners, said Abe Bonowitz, director of affiliate support for the National Coalition to Abolish the Death Penalty. He's known Prejean since 1989 and said he was there when she opened one of the first boxes containing her 1993 book, Dead Man Walking. The book, for months on the New York Times best-seller list, is an account to that point of a ministry that began in 1982, when the Louisiana native moved into a housing project in New Orleans and took up a correspondence with Elmo Patrick Sonnier, "number 95281, Death Row, Louisiana State Penitentiary, Angola." On those early printings, there was no picture of actor Sean Penn on the cover depicting a fictional prisoner based on Sonnier and another of the convicted murderers Prejean befriended. It was before she was portrayed by Susan Sarandon in the 1995 movie directed by Tim Robbins.

The book and movie boosted her ministries in ways unimaginable in the early days when she was wrestling with her own presumptions about crime, the justice system, the humanity of convicted killers, and learning, painfully, about the needs of victims' families. The trajectory of her work and ministry took on a higher and longer arc that today seems nowhere near an end. It is the story of activism, certainly, but it is also the story of a contemporary nun. 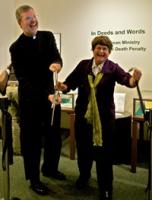 She is still telling her story everywhere, a story that at its core is a plea, as she would put it, "out of the heart of the Gospel." It is a plea born of her long experience and one that exemplifies, perhaps, the "stumbling block" of the Christian scriptures because it asks people not to seek vengeance, in fact to take a nonviolent path, in circumstances where vengeance seems so understandable and justified. Breakthroughs have occurred, of course, in ways that have little to do with that kind of argumentation. DNA evidence has helped unravel the mysteries of criminal forensics and overturned convictions. Awareness is growing that demanding death for death is, practically speaking, more expensive than incarceration, no longer necessary to protect the populace and lacking in any justification as a deterrent to crime. States increasingly are considering doing away with the death penalty.

But Prejean, at heart a storyteller who can marshal evidence from a host of disciplines and put it across as compelling narrative, derives most of her credibility not from argument but from where she's placed her life. And the constant in her life that undergirds her work is the fact that she's a nun. So it is that reporters today want to know what she thinks of the investigations -- of the individual orders, of the Leadership Conference of Women Religious, of the recent Vatican takeover of LCWR. She won't bite on the questions, says she doesn't want to put the energy into a head-on confrontation. The closest she gets to the subject during her visit to DePaul comes one evening when she describes how her order, just after Vatican II, took seriously the council's mandate to return to the roots and discover anew what the order should be doing.

The sisters took a look at their beginnings in the mid-1600s, and the early conviction that the women "were to get out with the people. The only women who could get out on the street at the time without men were widows. So we dressed like widows," she explained. In the 20th century, she said, "we took off the habit to be with the people, not just to be comfortable."

More than that, the sisters began to seek places to act on matters of justice. "Action liberates," she tells her mostly young audience. "When we begin to move toward justice, we are liberated." Don't look for the world-changing act, she says. Just do something, she urges. Her life's ministry began with a letter to a convict. "No matter how small, do it. If you stay in your head you remain paralyzed."

The archives contain a 1994 letter to her editor regarding a new book idea, one about which she was momentarily passionate. The working title: If Mama Ain't Happy, Nobody's Happy: Women's Struggle for Equality in the Roman Catholic Church.

It never got written because events of the moment took over: She was accompanying two people she believed innocent, who were eventually executed. Those stories -- wound tightly with her passionate condemnation of the death penalty and indictment of the American justice system -- would become her second book, The Death of Innocents: An Eyewitness Account of Wrongful Executions.

In a recent phone interview she gets a bit closer to the point of the investigations of the sisters and her life as a nun. She is in a Western state, amid mountains' grandeur, working on a third book, River of Fire: Spiritual Journey to Death Row. She describes it as a prequel to her public ministry, a dive into Vatican II, "and the call to be the people of God." It is the best way for her, she says, to take on the issues of the day. "I don't want to directly take on these issues in themselves. I would rather just demonstrate or embody what a life is living out the Gospel. That is a way of telling the women's story: Here's what happened to me.

"Instead of countering with theological or ecclesiastical argument, I want to stay on track of what I'm bound to do, the mission I'm called to do." And that means telling what led her to a ministry of, to date, "accompanying six human beings who were put to death in front of my eyes."