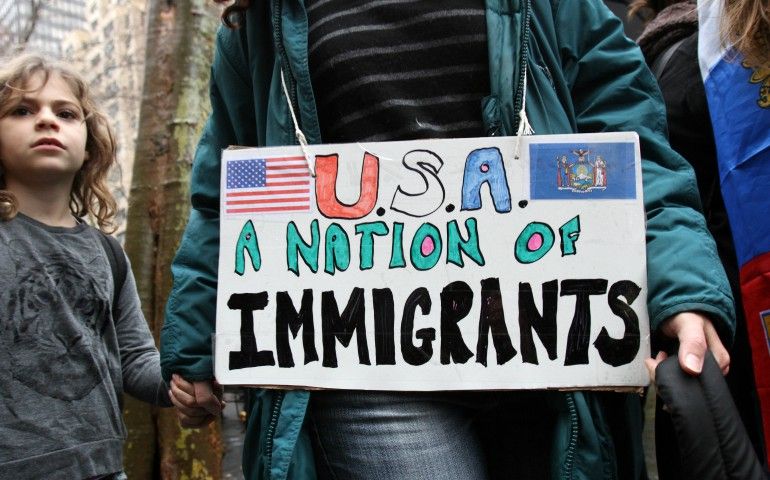 A woman holds a child's hand as they arrive for a rally in support of immigrants' rights in New York City Dec. 18, 2016. (CNS photo/Gregory A. Shemitz)

Houston — Local law enforcement and local jurisdictions should not be required to enforce federal immigration law, said Cardinal Daniel DiNardo of Galveston-Houston, president of the U.S. Conference of Catholic Bishops.

Local police can work with federal law enforcement in dealing with "violent criminal aliens," DiNardo said, but the "burden" of enforcing federal immigration law would be "taking away from their efforts to ensure public safety" while they are "pursuing those who are otherwise law-abiding." He added, "It also makes immigrant communities reluctant to report crimes and to cooperate with the police."

DiNardo made his remarks June 9 in the opening address of a conference in Houston, "Mobilizing Coherent Community Responses to Changing Immigration Policies."

The three-day event was hosted by the Center for Migration Studies of New York, the Cabrini Center for Immigrant Legal Assistance of Catholic Charities of Galveston-Houston, the Houston Immigration Legal Services Collaborative and the South Texas College of Law Houston.

DiNardo noted the U.S. bishops for years have pushed for comprehensive immigration reform, but the nation's refugee and immigration policy, he said, is going the opposite direction, with a renewed emphasis on enforcement-only efforts.

The cardinal criticized a new Texas law that requires local police to enforce U.S. immigration laws. "Over the long term, (it) will weaken, and not strengthen, public safety," he said. "By requiring jurisdictions in Texas to act as immigration agents, the law would create fear in immigrant communities throughout Texas and divert police attention from their primary mission: to protect the general public."

DiNardo lauded the position by Houston Police Chief Art Acevedo on the law.

At a news conference April 27, the day after the Texas House passed the bill, Acevedo said, "I'll be real frank with you: These police officers joined this profession not to stop people jaywalking and ask for their papers," adding that "if all the sudden I have a police officer who decides 'I'm going to go play ICE (Immigration and Customs Enforcement) agent all day and harass day laborers at Home Depot,' explain to me, when I lose my authority to tell my officers they can't do that, how does that enhance public safety? Tell me that with a straight face."

DiNardo said Catholic teaching clearly "supports the right of a sovereign nation to ensure the integrity of its borders and to enforce its laws. We object, however, when laws and policies fail to respect human rights or fail to ensure due process in its justice system. Often the U.S. immigration system does not meet this test."

The bishops support the role of the Border Patrol but are concerned with border politics, he added.

The Catholic Church also believes, he said, the United States "must continue to protect those who ask for our protection from persecution in their homelands."

"As the world's richest nation, we are able to resettle far more than 50,000 refugees a year, all of whom are themselves fleeing terror of some kind," DiNardo said. "As many of you know, the security process for vetting refugees is more stringent than for any other entrant into the United States, lasting as long as two years, in some cases. As a nation, we can ensure our security without sacrificing our humanity."

Even now, he noted, "we are witnessing a humanitarian crisis in the Northern Triangle of Central America, in which unaccompanied minors and family units are fleeing gang violence in their countries. We must not respond to this outflow with deterrence policies, marked by family detention, interdiction, and the lack of due process. Instead, we must respond with protection policies, to ensure that those who are at risk, especially the vulnerable, are not returned to danger."

Responding in this way, DiNardo said, "is our responsibility under international agreements and to our fellow human beings."

The cardinal reviewed Catholic teaching from the pope and the U.S. bishops on immigration. "Christ himself experienced the feeling of leaving one's homeland," first in fleeing with Mary and Joseph into Egypt to escape Herod's terror, then as "an itinerant preacher, who, in the Gospel of Matthew, had 'no place to lay his head,'" DiNardo said.

Pope Francis, he noted, has said that "migrants are not pawns on the chessboard of humanity," and has made migration "one of the signature issues of his papacy, opposing the 'globalization of indifference' to the plight of migrants and refugees."

Elements of the kind of immigration reform sought by the bishops include provisions for "undocumented immigrants who have built equities in our country and have been otherwise law-abiding (to be) put on a path to citizenship," DiNardo said. "Instead of deporting such people, we should allow them a chance to get on the right side of the law, so they can fully contribute their skills and gifts to our society. We also need to increase the legal avenues for immigrants and families to migrate in a safe and orderly manner."

"We are at a crossroads in our nation's history," he said. The country can either "abdicate our moral responsibility and our global leadership in protecting human rights" or choose "to remain the leader in upholding humanitarian values in our nation and around the world."

Panel: Immigrants cause shift in the prototypical 'Catholic experience'