'Donít just mourn for them; imitate them' 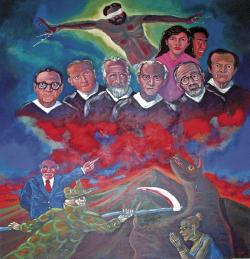 A mural by Miguel Antonio Bonilla depicts the Jesuit priests and two women who were shot to death by an elite army unit Nov. 16, 1989, at the Jesuit-run Universidad Centroamericana in San Salvador. The priests, Juan RamÛn Moreno, Amando LÛpez, Segundo Montes, Ignacio Ellacur"a, Ignacio Mart"n BarÛ, Joaqu"n LÛpez LÛpez, their housekeeper Elba Ramos and her daughter, Celina, are depicted in the painting, w

With the fateful date of Nov. 16 approaching, the United States’ 28 Jesuit colleges and universities are preparing to commemorate the 20th anniversary of the killing of six Jesuits and their coworkers in El Salvador. Lectures, films, liturgies and various other forms of commemorative events are scheduled.

Some students, faculty and staff members will be going to El Salvador for the anniversary events there; others will be headed to Fort Benning, Ga., for the 12th Ignatian Family Teach-in for Justice. The teach-in has been held in conjunction with the annual gathering of the School of the Americas Watch, which advocates the closing of the U.S. Army school where 19 of the 26 soldiers who participated in the Nov. 16, 1989, killings had received training shortly before the murders.

Clearly, the memory of the murders remains strong on our campuses today. Looking even further back over the past 35 years, three major events have led to this point.

In 1975, the Jesuits’ 32nd General Congregation issued its famous Decree Four, which prescribed that every Jesuit and every Jesuit institution must be committed to the service of faith and the promotion of justice. Faith and justice institutes, centers and programs began to appear, and the linkage between faith, justice and education began to make more sense.

In 1989, the assassination of six Jesuits and their two coworkers at Universidad Centroamericana focused attention on what could happen if we really took the congregation’s decree seriously. What happened on the Jesuit campus in San Salvador had an immediate and lasting effect on all our campuses.

In 2000 at Santa Clara University in California, we had the third major event, the address of Fr. Peter-Hans Kolvenbach, then superior general of the Jesuits, on the 25th anniversary of the commitment made in 1975 to a faith that does justice. That address, quoting liberally from Fr. Ignacio Ellacuría, the slain rector/president of Universidad Centroamericana, has arguably had the greatest impact of any recent statement or address on Jesuit campuses. Kolvenbach emphasized educating for “solidarity with the real world by letting the gritty reality of this world into our lives, so that we can learn from it, think about it critically, respond to its suffering, and engage it constructively.”

Especially reminiscent of Ellacuría was Kolvenbach’s insistence that “the nature of every university is to be a social force, and it is the calling of a Jesuit university to take conscious responsibility for being such a force for faith and justice.”

The response to Kolvenbach’s talk in 2000 was much more concrete and practical than the response to Decree Four in 1975, quite likely because of what happened in 1989, and because of the expansion of the justice agenda by the 34th General Congregation to include ecological issues, human rights (especially for women), and global interdependence, particularly in regard to marginalized peoples and refugees.

At the center of Kolvenbach’s vision was the vision of the martyred Ellacuría. Ellacuría was the architect of a “new kind of university,” one deeply committed to the “national reality” of the country -- but as a university, i.e., teaching, doing research, and engaged in social projection that addressed the reality of a violent society.

He led the transformation of Universidad Centroamericana, established in 1964 as a middle-class alternative to the leftist National University, into a model of an engaged university. The university would publish nine highly respected periodicals, including Estudios Centroamericanos, the focus of the university’s analysis of the Salvadoran reality. The university sponsored seminars and forums, trying to be the voice for the voiceless and power for the powerless.

For this, the university was bombed 16 times, including a bombing of the Jesuit residence and the campus radio station. Finally, at about 1 a.m. on Nov. 16, 1989, the six Jesuits and two coworkers were shot to death by soldiers under the command of Lt. José Ricardo Espinoza Guerra, a former student at the Jesuit high school in San Salvador.

It is fair to say that every Jesuit college and university has been changed because of what happened in El Salvador that night. The murders became an inspiration for greater solidarity between the Americas, North and South, including more and more immersion experiences for students, faculty, staff, trustees and alumni. Jesuit schools have taken more seriously their commitment to a faith that does justice.

Any of us could justifiably be jealous of the clarity, accuracy and tenacity of the vision of Ellacuría and his colleagues at a university within a society in crisis. This was hardly superficial political correctness, but rather the result of demanding analysis, scholarly work, relentless courage and deep faith -- the work of engaged scholars.

Ellacuría was a world-class philosopher-theologian. Fr. Ignacio Martín-Baró was a social psychologist with a doctorate from the University of Chicago and a publication portfolio that included 11 books and scores of articles. He founded the Center of Public Opinion, which provided a “social mirror” of the Salvadoran people. A lectureship has been set up in his honor at the University of Chicago.

Fr. Segundo Montes was a social anthropologist who had a profound knowledge of the diverse components of Salvadoran society. He founded the Center for Human Rights, which monitored the pulse of what was happening in El Salvador and throughout Central America.

I would argue that the Universidad Centroamericana model, with its focus on the “national reality,” is very relevant today. The urgency of its implementation was perhaps unique in El Salvador at that time, but perhaps not if we look around us at the problems we face in our cities, our nation and the world. Can we teach and research, and ignore immigrants and refugees, the homeless, those who are HIV-positive, the grave and complex problems of the economy, the growing gap between rich and poor, violence and ethnic hatred and pending environmental disasters, cities and families that can’t or don’t function?

Education is clearly the primary task of the university, not social action, but one of the key goals of education has always been to develop good citizens, whether it be the Athenian statesman, the Renaissance gentleman, or women and men who will lead us in the 21st century. We cannot truly educate these women and men without involving them experientially and reflectively in the major issues of our time.

Faculty on Jesuit campuses are today following in the footsteps of their slain brothers and sisters at Universidad Centroamericana. Increasingly, justice issues are an integral part of teaching and research. Some of their initiatives include creating research centers focusing on pressing social issues, including the Center for Human Rights and International Justice at Boston College; the Center for Faith and Public Life at Fairfield University in Connecticut; the Lane Center for Catholic Studies and Social Thought at the University of San Francisco; and the Appalachian Institute at Wheeling Jesuit University in West Virginia.

A National Steering Committee comprised of faculty keeps alive the commitment made at Santa Clara in 2000. The committee recently conducted a fourth conference on the commitment to justice by our colleges and universities. These conferences emphasize the importance of integrating a faith that does justice within the curriculum, in the classroom and in research agendas. Student groups not only participate in the Ignatian Family Teach-In for Justice and the Ignatian Solidarity Network, but undergo transforming Third-World immersion experiences.

In a very real sense, Jesuit colleges and universities are following the advice of the 12-year-old girl at the funeral in 1989: “Don’t just mourn for them; imitate them.”

Jesuit Fr. Charles L. Currie is president of the Association of Jesuit Colleges and Universities.

Justice | 'Donít just mourn for them; imitate them'

For I was a stranger and you welcomed me