Encyclical signals church not pulling out of politics 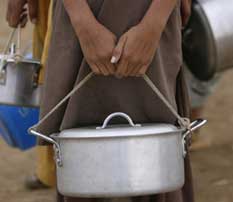 In Caritas in Veritate, Benedict honors Paul VI's Populorum Progressio as the "Rerum Novarum of the present age" and takes up his own responsibility to bring Catholic social thought to bear in a much changed economic and political landscape.

The title expresses Benedict's distinctive concerns. He proposes caritas as a virtue with the moral, intellectual, and political force desperately needed in our globalizing world. Caritas -- grounded in God's Trinitarian life -- impels us to seek the good of the other. Just as God refuses to leave humanity suffering in its sinful state, so charity prevents us from accepting the myriad ways that our economies dehumanize and despoil. Just as God saves humankind within history, so charity impels us to realize the positive potential of economic life for human communion and mutual flourishing.

More than a simple motive for good deeds, Caritas drives us to passionately question the status quo and to understand the full moral truth about the human person. in Veritate signals Benedict's wager on the possibility of a profound and critical conversation of religions, cultures, and human sciences to work together to know and enact human flourishing.

Papal teaching seldom maps to our domestic political and cultural divides. We expect calls for "fidelity to the truth" about the human person to precede discussions of sexuality and bioethics. Here they address human economic activity. Benedict insists that market activity is neither destructive nor even morally neutral. "It is part and parcel of human activity and precisely because it is human, it must be structured and governed in an ethical manner." From this perspective he offers a reflection on economic activity as an expression of virtue and undertakes an unflinchingly critical assessment of contemporary capitalism. If Ayn Rand would applaud some passages, others read like litanies from a 21st century Grapes of Wrath.

Fears and hopes that Benedict would subordinate justice to charity in a manner that signaled a withdrawal of the Church from politics were not realized. On the contrary, Benedict offers a complex account of the interplay of justice and charity. With Paul VI, he asserts that justice is the "minimum measure of charity." Charity demands justice, but goes beyond "what is due" seeking to build "relationships of gratuitousness, mercy, and communion."

Benedict builds upon Paul VI's notion of "integral development" to face the question of modernity squarely; rejecting both the idolatry of modern "progress" and the apocalyptic rejection of the earthly city as irrelevant to the Kingdom of God. Charity manifests God's love in history, "it gives theological and salvific value to all commitment for justice in the world." Such work in the "earthly city" is "to some degree an anticipation and a prefiguration of the undivided city of God."

Benedict offers one of the most extended discussions of the common good in a magisterial text, describing it as "the institutional path -- we might also call it the political path -- of charity, no less excellent and effective than the …charity which encounters the neighbour directly, outside the institutional mediation of the pólis."

It is precisely the common good that is threatened by contemporary globalization. The encyclical wrestles with this epochal challenge: the economy has grown beyond the reach of the political structures that we have relied upon to yoke the market's enormous power to the moral service of the common good.

In response, Benedict proposes that economic action must be rendered moral from within. The breakdown of external controls on the economy allows it to realize its internal potential as an exercise of human solidarity that respects subsidiarity. If this warms the hearts of Catholic apologists for capitalism, it is accompanied by a call for an international political authority with power so robust that it would make Eleanor Roosevelt blanch. The encyclical frequently avers to creative socio-economic movements: fair trade, social entrepreneurship, the Focolare movement's "economy of communion," even attempts to return to indigenous agricultural methods. Such examples complement catholic social teaching's medieval nostalgia with movements that arouse the enthusiasm of a new generation of activists across the political spectrum.

Benedict displayed media moxie by releasing a document that condemns the dominance of wealthy "hyper-developed" nations over the global economy as the G8 prepares to meet in his back yard.

The document provides a provocative frame for the Pope's upcoming meeting with president Obama. The two are surprisingly similar in their very great differences. Benedict, often viewed as an Augustinian pessimist, offers Aquinas's optimistic view of reason to the world as the basis of dialogue. Obama, the candidate of hope, prefers to speak of truth in a minor key, informed by the tragic portrayal of religious certainty in Lincoln's second inaugural. Both nonetheless share a living faith and hope that the political process can be open to conversion to the truth and real action for the common good.

Benedict the pope offers a more radical economic critique than any elected politician could ever dare. It calls all of us, including President Obama to take seriously the historic nature of the challenge we face and to summon the honesty, courage, and ... love to respond adequately.

[Vincent Miller is a professor of theology at the University of Dayton.]

Justice | Encyclical signals church not pulling out of politics