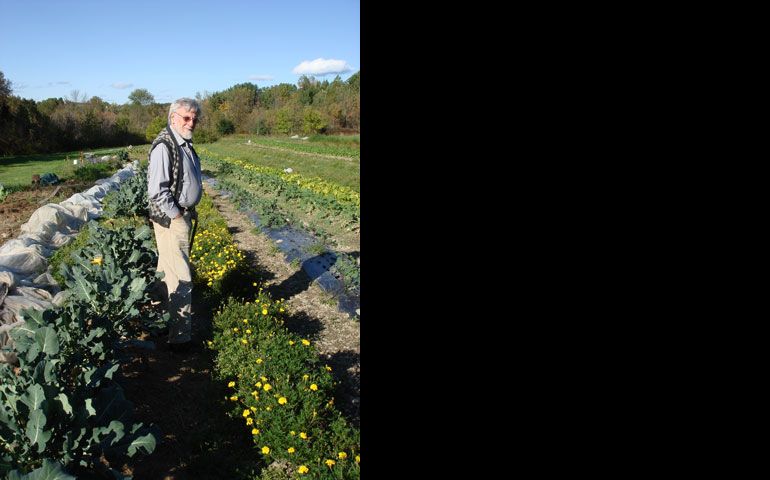 Marlboro, N.Y. — As a 60-year veteran of the Catholic Worker movement, Tom Cornell was among the first men who burned their draft cards to protest the Vietnam War; was arrested on numerous occasions; and served time in prison. Cornell, now 79, no longer participates in demonstrations that end in his incarceration -- though, he says, if the occasion arises he might. He does, however, participate in another vital part of the movement: a Catholic Worker farm.

The Peter Maurin Farm, where Tom and his wife, Monica, live, is about 50 miles north of New York City along the picturesque Hudson River. "I've been along the Rhine in Germany," Cornell told NCR on a recent trip to the farm. "And the Hudson beats it."

The farm functions as a "house of hospitality on the land" and as a crop producer for Catholic Worker soup kitchens in Manhattan. Above all, the farm is designed and operates according to the vision of Dorothy Day and Peter Maurin, who began the Catholic Worker movement 80 years ago.

In December 1932, Commonweal magazine sent Day, a struggling journalist, to cover the Hunger March in Washington, D.C. When she returned to New York, waiting at her doorstep was Maurin, an unkempt Frenchman who thought Day should hear his Christian message.

Almost immediately, Maurin preached to Day the "planks" of a movement he thought would bring people closer to the Gospels. The three-point program would become the foundation of the Catholic Worker movement.

As a way to emphasize personal responsibility, Maurin thought houses of hospitality should be established in parishes across the country. It should not be up to the church or the state to feed and house the poor, Maurin argued. Rather, it's the responsibility of individual workers to be their brothers' and sisters' keepers.

The final plank, and perhaps the most radical, was the most important to Maurin: the creation of "agronomic universities." Maurin viewed society as unsustainable. It's not enough to house, feed and help the needy, he argued; a complete reordering of society is needed. Society promised war, poverty, violence and abuse of the poor at the hands of the rich. Thus, he thought that community, meaningful work and control over the issues affecting their lives are what people desire. These could be found, according to Maurin, by building a community of scholar-workers on communal farms.

Today, there's been a "burst of energy" in the Catholic Worker farm movement, Cornell said in a presentation at the Maryknoll compound in Ossining, N.Y., in July. It's a response to "ecological and sustainability" issues, he said. "The way we live is simply unsustainable."

The Peter Maurin Farm is evidence of the continued move toward sustainability.

The two Catholic Worker houses and soup kitchens in Manhattan are not registered as 501(c)(3) charities, which would exempt them from certain federal taxes. If they were, rice, pork, chicken, mozzarella -- anything needed to supply the hungry with food every day -- could be bought at a fraction of the price from the U.S. Department of Agriculture. With 501(c)(3) status, Catholic Worker could apply to local food banks. They would also receive a bulk-mailing permit, which would make distributing the free Catholic Worker newspaper more affordable.

But registering as a charity would be contrary to the vision of Day and Maurin. "Dorothy wanted nothing to do with the federal government," Cornell explained.

So a large part of the food distributed at the Catholic Worker soup kitchens in Manhattan is grown at the Peter Maurin Farm. Eight thousand pounds of kale, onions, potatoes and other fresh produce are grown at the farm every year and shipped to the soup kitchens, which still feed about 100 people a day on the soup line and 50 or so house residents.

Although some Catholic Worker farms are completely self-sustaining, the Peter Maurin Farm relies on the town grocery store for items such as milk or noodles.

During an interview at the farm, Cornell paused to prepare and eat lunch, which consisted of fresh hummus and a bean salad made of crops from the farm. His wife later prepared a dinner of fresh kale, zucchini and noodles with tomato sauce. All the ingredients -- except for the noodles -- were produced on the farm.

To further sustainability, the food farmed in the spring, fall and summer is frozen, canned or dehydrated after harvest to create a year-round food supply. A well provides water for the farm and is used sparingly.

The farm also functions as a house of hospitality for the physically and mentally ill, and anyone in need of a place to stay. The farm is home to the Cornells' son, who is also the primary gardener and farmer. It also houses six other residents who would otherwise be homeless.

Other legs of the movement have also enjoyed fresh energy, Cornell said. He pointed to the continued nonviolent activism of Catholic Workers across the country.

In December 2005, for example, 25 Christians in the "nonviolent tradition of Dorothy Day" marched from Santiago, Cuba, to the U.S. military prison at Guantánamo Bay. The protesters included nuns, priests and members of U.S. Catholic Worker houses. The march was a protest against the cruel treatment of prisoners, many of whom were on a hunger strike.

While the march was taking place, Gitanjali Gutierrez, the lead attorney for Guantánamo Bay detainees, spoke at a press conference at the St. Mark's Church in-the-Bowery -- an Episcopal church blocks from the Manhattan Catholic Worker houses.

Despite the energy behind the farms and protests, there are challenges that face the movement.

For starters, the once decrepit and poverty-riddled Lower East Side of Manhattan, where the two New York houses are located, has become "embarrassingly chic." For Cornell, this raises an important question. "Do we belong here?" He shrugged. "Well, we still feed 100 people a day," he said.

There are also perennial financial issues that face Catholic Worker.

Referring to the newspaper, Cornell said, "We're always on the edge financially." After a subscriber ponies up the initial 1 cent for a subscription, the paper is delivered for free, for life. This distribution plan makes it hard to track what subscribers still want the paper. It's even hard to determine if a subscriber is still alive. "I had to take Charlie Chaplin off the list seven or eight years ago," Cornell said.

Despite the financial strain, there is still a demand for The Catholic Worker.

Recently, The Catholic Worker asked subscribers whether they would like to renew their free subscription. This yielded an encouraging result: Twenty-two percent of subscribers on the distribution list, which had been largely untouched for 50 years, said they wished to keep receiving the paper.

Cornell said subscriptions to The Catholic Worker don't necessarily play along religious lines. "There's a surprisingly large number of Jewish subscribers," he said. "This may be because of association with the old left."

There's also a renewed support for Catholic Worker by the institutional church. In November 2012, at New York Cardinal Timothy Dolan's recommendation, the U.S. Conference of Catholic Bishops voted unanimously to further Day's canonization cause. Dolan, perhaps an unlikely supporter of Day, said at the bishops' meeting: "I am convinced she is a saint for our time." She exemplifies, he said, "what's best in Catholic life, that ability we have to be 'both-and,' not 'either-or.' "

So with new energy on a number of fronts, it seems to Cornell and other supporters of the movement that the best years lie ahead for Catholic Worker. When asked how Catholic Worker continues to attract young people and continues to be energetic after 80 years, he responded: "We're ahead of the curve on so many things."

How we fill our space

Bishop in Mozambique is target of campaign for criticizing government