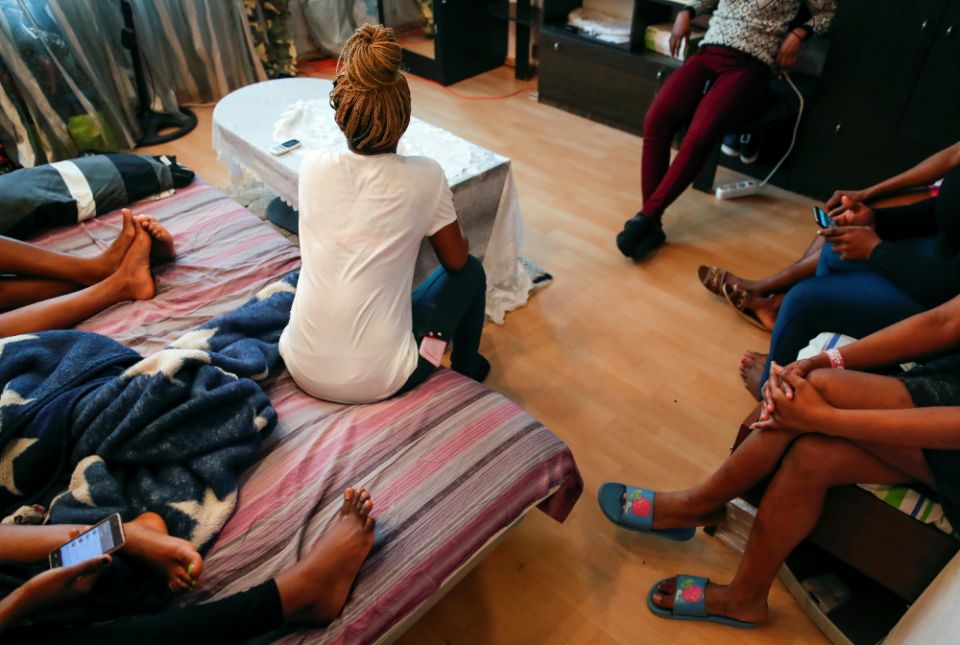 Young Nigerian women, rescued from human traffickers, gather in a shelter on the outskirts of Moscow Feb. 21, 2019. Human trafficking is a "crime against humanity" because it denies the human dignity of the victim, seeing him or her only as a piece of merchandise to be used to enrich or give pleasure to another, Pope Francis said. (CNS/Reuters/Maxim Shemeto)

Vatican City — Human trafficking is a "crime against humanity," because it denies the human dignity of the victim, seeing him or her only as a piece of merchandise to be used to enrich or give pleasure to another, Pope Francis said.

Human trafficking, "in its multiple forms, is a wound in the humanity of those who endure it and those who commit it," the pope said April 11, addressing the closing session of a Vatican conference.

The Migrants and Refugees Section of the Dicastery for Promoting Integral Human Development organized the conference April 8-11. The office brought together more than 200 bishops, priests, men and women religious, project coordinators, pastoral workers, representatives of Catholic organizations and foundations and trafficking experts from around the world to brainstorm and coordinate efforts to stop trafficking.

"Trafficking," the pope said, is "an unjustifiable violation of the victims' freedom and dignity, which are integral dimensions of the human person willed and created by God. This is why it must be considered, without a doubt, a crime against humanity."

Francis praised women religious, in particular, but also all Catholics working to stop human trafficking and assist the victims.

Before offering his blessing to conference participants, he prayed that God would "bless all the victims, console them, be close to the many who suffer from being despised, humiliated, commercialized."

Archbishop Paul Gallagher, the Vatican's foreign minister, told participants the crime of human trafficking "does not have borders. It violates human rights without discrimination," ensnaring children, women and men around the globe. "It is inextricably linked to statelessness, conflict, misery, corruption, a lack of education as well as migration and smuggling."

Some forms of human trafficking, for example sex trafficking, are well known, he said, but there also is a growing trafficking in newborn babies and in women who can serve as surrogates.

"The birth mothers are often poor and feel they have no choice but to sell themselves or their children for money," he said.

Before the pope arrived, Scalabrinian Fr. Fabio Baggio, undersecretary for the Migrants and Refugees Section, read the recommendations drafted by conference participants. They included a commitment by the church to raise people's awareness of the connection between human trafficking and sexual exploitation in prostitution and pornography and to make clear the sinful contribution of "demand" for prostitution and pornography. Participants also pledged to work for laws criminalizing those who buy sex services and those who profit from victims.

Other recommendations included: working for corporate responsibility in ensuring supply chains are free from slave labor; working against child labor; offering pre-departure orientation programs for foreign workers about their rights and possible dangers, especially in the maritime, domestic service and agricultural sectors; opening the eyes of consumers to the risk of supporting slave labor when purchasing very cheap projects; advocating a greater opening of legal channels of migration; and fostering development projects in countries of departure so migration is a choice, not a necessity.

Participants also pledged to advocate for an end to forced marriage, forced begging, forced reproduction and organ trafficking, including by encouraging more Catholics to become voluntary organ donors. They also asked bishops' conferences to set up anti-trafficking committees to share information, promote education, monitor trafficking in their country and coordinate ministry to victims.

The church must face its own role in violence against women

To ignore trafficking is to be complicit in the crime, pope says