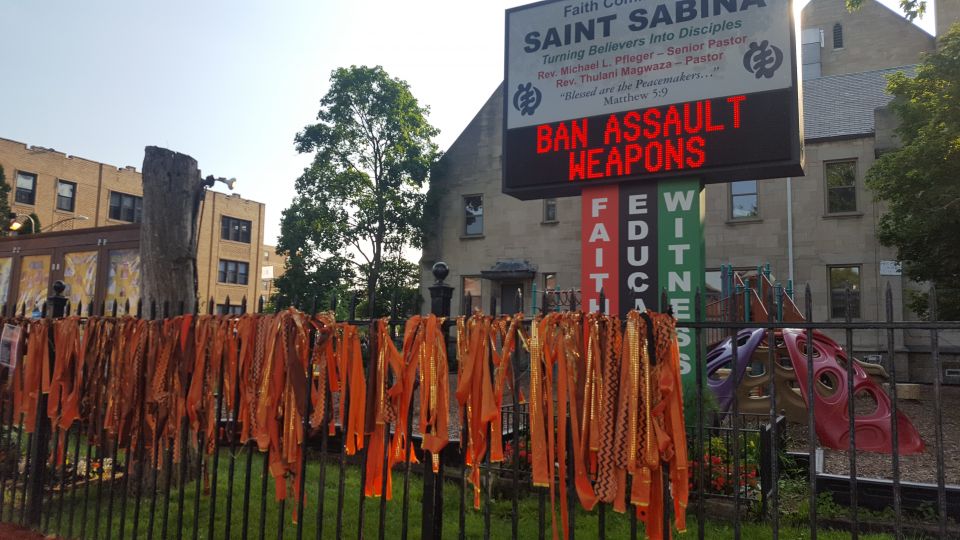 St. Sabina Parish on Chicago's South Side hosts its annual rally and march against gun violence at the beginning of summer, when gun violence typically rises. (Heidi Schlumpf)

Some came to see musicians Chance the Rapper, Jennifer Hudson and will.i.am, or the student activists who survived the shooting at Marjory Stoneman Douglas High School in Parkland, Florida, or former congresswoman and gun violence survivor Gabby Giffords.

But what stole the show at the annual end-of-the-school-year peace march and rally at St. Sabina Parish in Chicago was the 15-minute reading of the names of 147 young people under 21 who have been shot and killed in the city in the past year — including five infants.

The night before the rally, a 12-year-old girl visiting from Michigan for a relative's graduation party was shot and killed on Chicago's West Side. A person is shot in Chicago approximately every three hours.

"America, you should be ashamed," said Mariah Mack, one of the young organizers of the event. "You've allowed the future of your country to die."

There were plenty of strong words from student activists who addressed the crowd at the June 15 rally before a march through Chicago's Auburn Gresham neighborhood. The parish hosts the event every year as a kick-off to summer, when gun violence typically increases.

This year, the rally and march were the first stop on March for Our Lives' 50-city "Road to Change" tour focused on voter registration, especially in states where the National Rifle Association (NRA) holds sway over elected officials.

"All of your voices — no matter where you come from, your community or economic background — matter," said Kyrah Simon from Parkland, Florida, where 17 people died on Feb. 14. "Our voices and your voices united are stronger than anything else."

Student speakers railed against underfunded schools, mental health services and jobs programs and the recent approval of a $95 million new police academy in Chicago. But violence and lax gun laws were the common target.

"I'm tired of waiting for our politicians to do something to fix this problem," said Diego Garcia, of Immaculate Conception Parish on Chicago's South Side, announcing a summer-long hunger strike called "Starved for Change."

"We are the Rosa Parks of the 21st century," Garcia said. "We are the Cesar Chavez of our time."

Maria Hernandez warned the many politicians in the audience that they must do more than pose for pictures with student activists. "These people say they represent us, but they don't listen to us," she said. "Look around: Do you hear us now?"

Trevon Bosley of St. Sabina's Bold Resistance Against Violence Everywhere (BRAVE) shared how he has lost a brother and cousin to gun violence. Whether shootings happen in schools or on the way to school, "our passion for the cause is the same," he said. "We all want peace." 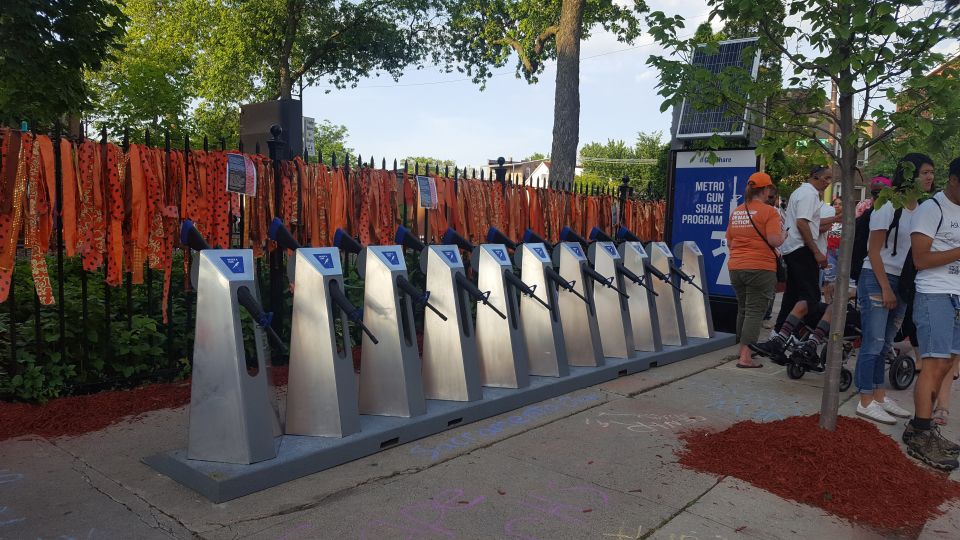 The Metro Gun Share Program is an art exhibit that simulates bike-sharing and illustrates how easy it can be to get a gun. (Heidi Schlumpf)

"Something is happening across this country," Pfleger said. "Young people are rising up, from the north and the south and the east and the west. And they're taking control."

Adults need to "either support our young people, or get out of the way," Pfleger said, reminding the older activists that young people "will outlive you."

Pfleger praised young people's impatience and their "unfiltered" messages. "You say what's on your heart and in your spirit," he said. "That's what America needs right now."

In the crowd, 15-year-old Immaculate Conception parishioner Lucy Sanchez said she was trying to combine her Catholic and activist sides. "I'm here to put my values into practice, including the Catholic value of the gift of life," she said. 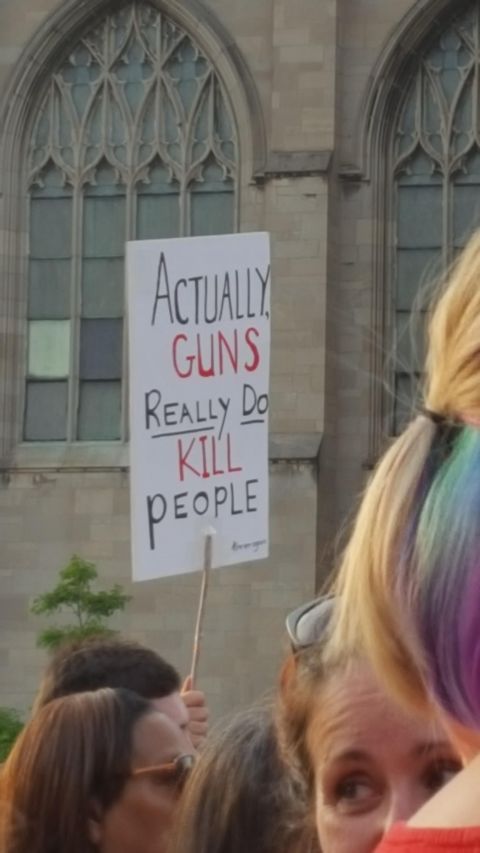 Singer and actress Jennifer Hudson, whose mother, brother and nephew were killed in a shooting in Chicago in 2008, sang a gospel song and led the crowd in singing "Amazing Grace."

"Each of us has lost someone, or is afraid of being lost, afraid to go on the streets. Am I right?" Hudson said, encouraging the young people to "stay positive" despite the challenges.  "There's so much more to life than the block you live on."

Will.i.am, founder of the hip-hop group Black Eyed Peas, stressed the importance of coming to events like the rally and march. "The revolution will not be a revolution if it's only tweeted and re-tweeted," he said.

Chance the Rapper praised the size of the crowd. "There's so many of y'all. What's up?" he said to cheers. "I think this type of movement, with this amount of people, we can definitely get something done. … We want safety from all forms of violence."

Before the reading of the names of the young people who died this past year, Diamond Ocasio asked all of those who had lost someone to gun violence to raise their hands.

Among them were Marsha Lee and Regina Dunagan of St. Sabina's Purpose Over Pain support group for parents who have lost children to gun violence. Both were wearing "Never forget" T-shirts with their sons' names and buttons with their sons' photos.

Lee appreciates the increased attention to the issue of gun violence that has come with high-profile school shootings, but wonders where the interest was when her 20-year-old son, Tommy, was killed in 2008.

"We've been having this issue in Chicagoland for so long," she said, adding that she supported stricter gun laws. "We don't have to make it so easy for them."

Dunagan has been working against gun violence since her 23-year-old son, Vincent Avant, was murdered in 2005, but is frustrated that children are still dying.

"It seems like the more we march, the more lives are being taken," she said. "But even if it doesn't bring back our own kids, if it can stop one child from getting killed, it's worth it."

Debate fresh 25 years after 'Economic Justice for All'

Vandalism at Denver's cathedral is latest incident against local churches

Catholics in Argentina speak out against mining and other extractive industries