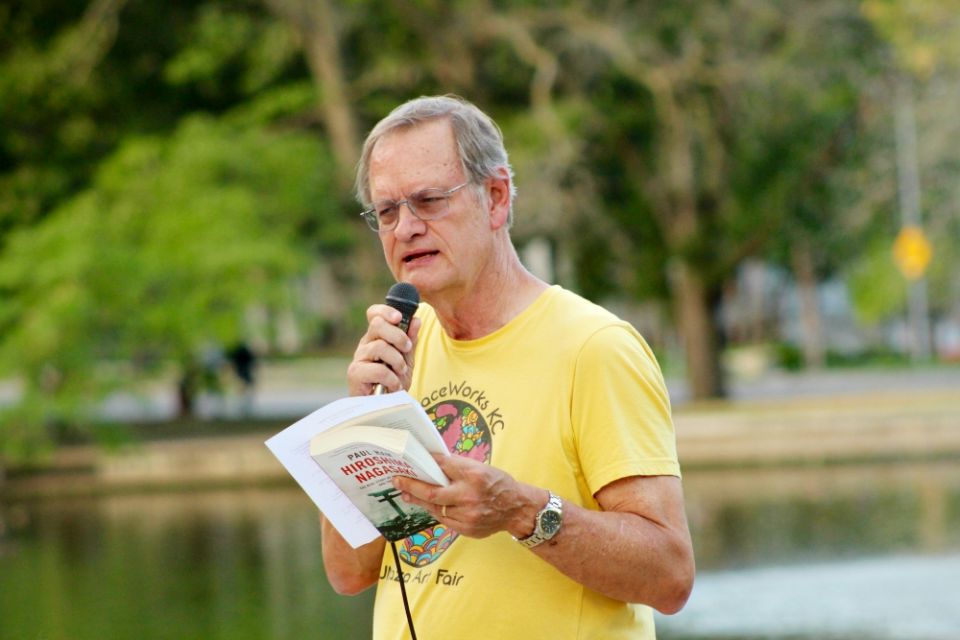 Kansas City, Mo. — As three-score people gathered in a park in Kansas City, Missouri, the evening of Aug. 5, they were reminded that thousands were gathering at the same time, 6,500 miles away in Japan.

Both gatherings were to commemorate the moment on Aug. 6, 1945, when the U.S. dropped a nuclear bomb on Hiroshima, Japan.

"Tonight, there is no distance between Hiroshima and Kansas City," Tom Fox, former editor and publisher of the National Catholic Reporter, told the Kansas City gathering. "Time and space have evaporated."

Fox has twice visited Hiroshima and for decades has reported on protests at the nuclear weapon parts plant in Kansas City. But this year, Fox held out hope.

Referring to many memorial events around the world, he continued, "It behooves us and others to gather not just to mourn but also to move forward. Every single one of us is providing hope."

Kansas City is home to the former Bannister Federal Complex, a site for the production of non-nuclear parts of nuclear weapons from 1949 to 2014, and the National Security Campus, a new plant that makes nuclear weapons parts.

Around 65 people joined the annual memorial to hear talks, to sing, to tell each other why they came to a park lagoon on a 98-degree day, and to take a vow of nonviolence. They were welcomed by Henry Stoever, board chair of PeaceWorks Kansas City, sponsor of the remembrance event.

"We cannot undo tragedy," Stoever said. "We can say we are sorry. We can build a better world. We can be compassionate. We can walk the journey, accompanying those who are suffering. We can be love."

PeaceWorks treasurer Dave Pack compared the bombs dropped in Hiroshima and Nagasaki (15 and 21 kilotons respectively) with today's bombs, which have 20 to 30 times the destructive power of those in 1945.

Pack also reported on efforts to ratify an international treaty that would ban nuclear weapons. "The Treaty on the Prohibition of Nuclear Weapons passed on July 7, 2017, by a United Nations vote of 122 in favor, one against, one abstention, with 69 nonvoting nations," Pack said.

So far, 59 nations have signed the treaty, and 14 have ratified it. Fifty nations need to ratify the treaty to for it to take effect. For this reason, Pack said this year's remembrance program can be held "in hope."

Ann Suellentrop reported on civil resistance actions she joined this summer to protest the 20 U.S. B61 nuclear bombs at Büchel Air Force Base in Germany. Surveys indicate 93 percent of the German public wants the nuclear weapons removed, Suellentrop told the audience.

The protests in Germany had a Kansas City link. "The Kansas City Plant is making parts for the new B61-12 life extension program, which will replace the current B61s in a couple of years," Suellentrop said. "That means these new bombs will last into the 2070s!"

Suellentrop said she told her colleagues abroad about the plant in Kansas City, and she said, "A group of Europeans want to come to Kansas City next year to protest!"

[Jane Stoever is married to PeaceWorks board chair Henry Stoever. She is a former features editor for National Catholic Reporter.]