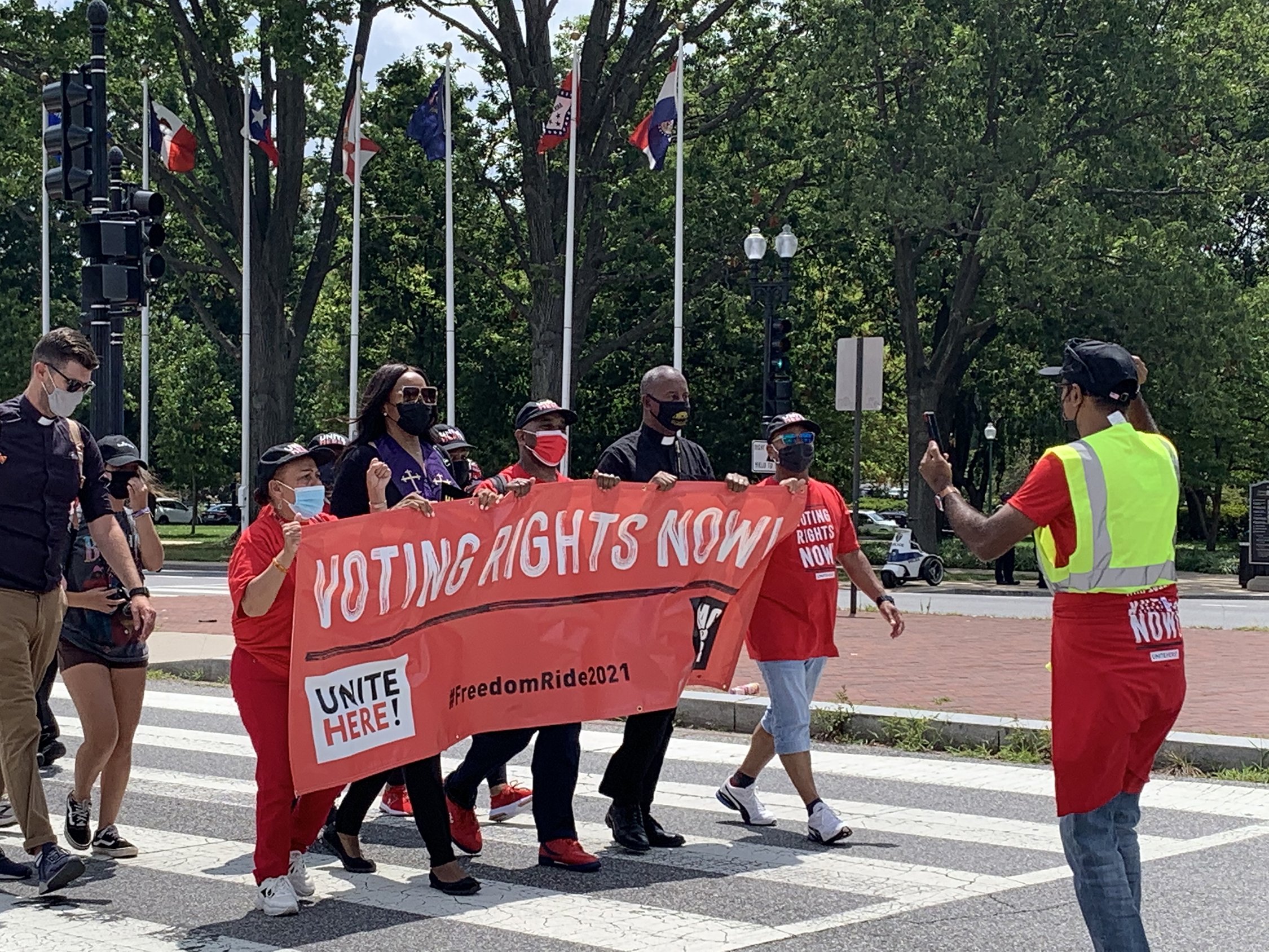 Men and women from different religious groups march toward the U.S. Capitol in Washington Aug. 2, 2021, during a protest for voting rights and economic justice organized by the Poor People's Campaign: A National Call for Moral Revival. (CNS photo/Melissa Cedillo, National Catholic Reporter)

Hundreds of people marched — and over 200 of them were arrested — Aug. 2 at a "Moral Monday" rally for voting rights and economic justice near the Capitol.

Among those arrested were the Rev. Jesse Jackson, whose involvement in civil rights goes back to being a companion of the Rev. Martin Luther King Jr. the day he was assassinated in 1968. Also arrested was the Rev. William Barber II, the Black Protestant minister who originated the "Moral Monday" marches in 2013 in North Carolina.

According to a Capitol Police spokesman, over 200 people were arrested for blocking a public street. According to WJLA-TV, those arrested were processed at the scene for the misdemeanor offense and freed on their own recognizance.

Protesters demanded that Congress pass the For the People Act, the intent of which is to expand access to voting, boost ethics rules for public servants, stem corruption at the polls and reduce the influence of big money in politics.

The march started at Union Station and passed the Supreme Court and the Capitol before marchers were denied entrance to a Senate office building. They had asked to meet two Democratic senators and Senate Minority Leader Mitch McConnell, R-Ky., whom they see as stymieing the passage of voting rights legislation.

Denied access, participants started blocking Constitution Avenue, which runs alongside the Capitol and the National Mall.

Marchers also sought restoration of the full Voting Rights Act of 1965, whose provisions have been weakened by Supreme Court decisions in 2013 and this year; an end to the filibuster; an increase in the federal minimum wage to $15 an hour; and "fair and respectful" treatment for the estimated 11 million undocumented immigrants in the United States.

"The vote gave Americans of all backgrounds the opportunity to address the inequities of our country,” Johnson said. "Those seeking to limit access to that vote will strangle liberty and justice for all."

She added, "In 1965 when Lyndon Johnson pled for voting rights reform he invoked the mighty anthem of the civil rights movement. These words still ring in our hearts. We shall overcome. We must overcome!"

In contrast to President Johnson's actions, Rev. Barber said that when seeking a meeting with President Joe Biden on voting rights, White House staffers have said the Poor People's Campaign, which he co-chairs, must wait until after the infrastructure bill passes.

"We're asking the White House why are they waiting?" Rev. Barber said.

Rev. Jackson later appeared at an African Methodist Episcopal church in Washington where supporters continued the call for voting rights.

The Poor People's Campaign: A National Call for Moral Revival, which sponsored the march and rally, tied it to the Aug. 6 anniversary date of the Voting Rights Act being signed into law.

According to The Washington Post, rally participants included over 100 state lawmakers from 20 states. Among that group were Democratic members of the Texas Legislature who left the state en masse in July to deny remaining lawmakers a quorum to thwart passage of what they consider a restrictive voting rights bill.

This was the third Moral Mondays rally in Washington this summer. Past rallies were held June 7 and July 19.

The Moral Mondays concept began in 2013, after Republicans won control of North Carolina's governorship and both houses of the state Legislature.

Each Monday, a different cause would be the focus of the rally, including voting rights, worker rights, immigrant rights, the environment, cuts to social programs, public education, tax policy and the state's Public Facilities Privacy & Security Act, which passed in 2016 and became known colloquially as the "bathroom bill."