'I want to live with my family' 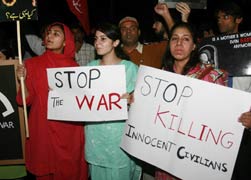 In this 2008 file photo, students and peace activists in Lahore, Pakistan carry signs for peace during a protest against U.S. military strikes in Pakistan's tribal areas along the Afghanistan border. (CNS/Reuters)

Islamabad, Pakistan --Abir Mohammed, a refugee from Bajaur, says that the battles that raged in his home province since 2008 have dramatically changed his life. We met him in a crowded Islamabad café where he politely approached customers, offering to shine their shoes. He isn't accustomed to shoeshine work. But he needs to earn as much money as possible before reuniting with family members who await him, near Peshawar, in a tent encampment for displaced people.

Formerly, he lived with his wife, his five children, his mother and four brothers in a home near the Afghanistan border. "We were very satisfied with our life," says Abir Mohammed. "My brothers and I cultivated wheat crops and maintained orchards." His land is full of rich soil. "But, in these days," says Abir, "due to disasters and lack of water and electricity, there is no chance of cultivating crops."

Battles with militants in Bajaur date back to late 2008 when "some 8,000 troops including a full brigade from the regular Pakistan Army, fought insurgents who had become so entrenched that they were running a parallel administration." ( See "In Bajour, Pakistan says U.S. needs to do more" by Myra MacDonald, Reuters April 14. http://www.alertnet.org/thenews/newsdesk/LDE63D1MU.htm).

Now, the Pakistani army claims to have cleared out all of the militants. News reports have shown collections of weapons found by Pakistani soldiers. Pakistani military officials point to networks of tunnels and cave dwellings, impervious to aerial bombardment, that are now empty.

Many Pakistanis, including some Pakistani military officials, express astonishment to the U.S. government suggestion that Pakistan should do more to dislodge militants from strongholds in the tribal areas and other parts of Pakistan. Myra MacDonald, reporting for Reuters, quotes a Pakistani Army officer, Colonel Nauman Saeed, insisting that following Pakistani army operations in Bajaur U.S. forces in Afghanistan allowed about 700 militants to escape into the neighboring Kunar province.

"In their language, they need to 'do more'," said Colonel Saeed.

The Pakistani military says the casualty figures and troop levels speak for themselves. Pakistan has lost 2,421 soldiers fighting militants since 2004. In Afghanistan, 1,777 U.S.-led coalition troops have died since 2001, according to the Web site icasualties.org. Currently 147,400 Pakistani troops are stationed in the west and northwest along the Afghan border, fighting militants, while total U.S.-led coalition troops in Afghanistan will number about 140,000 when a U.S. troop surge is complete.

Meanwhile Pakistanis outside the military wonder whether there is more for the U.S. and Pakistani governments alike to do that does not involve deploying and sacrificing more troops.

Anticipating a military offensive, the political agent of Bajour encouraged all of the people in Abir Mohammed's area to leave their houses. Collecting as much of their valuables as they could carry, Abir Mohammed's family fled across the border to Afghanistan. Two months later, while warfare continued, they crossed back into Pakistan and headed to a camp for displaced people. Abir Mohammed said that during the military offensive, Pakistani troops indiscriminately hit civilians and the Taliban. The military drove the Taliban out of his home, but then the Pakistani army moved in, and they are still occupying his home.

Thinking he may have to give up on regaining his fields and orchards, Abir Mohammed is trying to begin a new line of work. In Islamabad, he hopes to become a cobbler. But, the women in his family are begging him to join them in the refugee camp, where they are afraid to leave their tents lest they violate the traditional purdah customs. They long for their homes in Bajaur, but Abir Mohammed believes it is still unsafe to return. Taliban fighters, reputed to have escaped to Kunar, could still return and, as far as he knows, the military is still occupying his house. As far as Abir Mohammed is concerned, the Pakistani military could quite appropriately "do less."

Others ask: Does a non-military solution to the problems afflicting people like Abir Mohammed and his extended family exist?

Students from North and South Waziristan studying at a university in Islamabad emphasized that doing more to meet human needs for food, housing, roads and, most importantly, education, would quickly diminish the Taliban strength. "Look at me," said one student. "I am not part of the Taliban. I am educated. Why would I join the Taliban?" The U.S. counter-terrorism strategy in North and South Waziristan has relied almost solely on force through U.S. drone strikes and Pakistani military offensives.

Senator Mushahid Hussain Sayed of the Pakistan Muslim League says that Pakistan has had enough military aid and that non-military solutions are needed. He also advises that if the U.S. wants to help, it should focus on concrete financial aid for education and health, distributed through reliable Pakistani civil society groups.

If the U.S. wanted to declare war on fundamentalism, rather than the desperate poor of the Middle East and South Asia that are so vulnerable to recruitment by fundamentalists, it would decide to genuinely help the Pakistani government "do more" to meet its population's human needs, and a good first step would be to ensure that desperately needed resources are not railroaded into maintaining military strength, a lingering legacy in U.S. and Pakistani relations that traces back to the Bush-Musharraf era. During those years, the United States gave Pakistan $11.9 billion in assistance, $8 billion of which went directly to the dictatorial military regime. Not a single public works project was initiated by the United States throughout that period.

Richard Holbrooke, the United States special representative to Pakistan, has recently convinced the U.S. Congress that the $7.5 billion in non-military aid appropriated to Pakistan through the Kerry-Lugar bill should go directly to Pakistani firms, thereby cutting costs and empowering Pakistani civil society. This may be a step in the right direction.

However, Senator Mushahid Hussain notes that the United States will give Pakistan no more than $10.5 billion over the next 5 years. "This amounts to the same sum spent on two-and-a-half weeks of fighting in Iraq and Afghanistan," says Mushahid Hussain. "Meanwhile, Pakistan is paying the highest price in terms of human lives." He's referring to military casualties, but these are not nearly the entire human cost.

Pakistan is suffering from a very high rate of child malnutrition, with 39 per cent of children moderately or severely malnourished. Half of the population in Karachi, Pakistan's largest city by far with over 15 million residents, live in squatter colonies and urban slums without access to basic civil amenities. Load shedding due to electricity shortages and the value added tax recently imposed by the International Monetary Fund have led to mass demonstrations in the streets of Pakistan's major cities. If these are the conditions in the urban areas with government support and infrastructure, what must it be like for those living in the tribal areas and the Northwest Frontier? What's more, the past year's military offensives have left Pakistan with the question of how to deal with the displacement of 3.5 million people.

Though many of the refugees have managed to return home to uncertain and often frightening circumstances, hundreds of thousands still remain in camps for internally displaced persons. According to a report published by the Human Rights Commission of Pakistan, conditions in the camps are tough. People are burdened by lack of security, inadequate access to medical facilities, crushing heat and food shortages. In many camps, foreign donors gave displaced families bags of wheat, but, lacking facilities to cook or grind the wheat, many families just sat on the bags.

Like the students from North and South Waziristan, Senator Mushahid Hussain believes that education is the way forward. "Education, education, education," he said, as though repeating a mantra. Abir Mohammed agrees with him. A madrassa in Islamabad is educating his two sons, free of charge. He feels sad because the madrassa only allows him to visit his sons twice a month.

This former landowner and aspiring cobbler wants to secure a better future for his displaced family. He has lost his home, his land and his livelihood because of successive Taliban and Pakistani military attacks. He said two of his cousins were killed by drones and two members of his tribe were killed by F-16 attacks. Asked what message he would like to send to people in the United States, Abir Mohammed answered: "Tell them, please, that I need financial assistance to start a business. And, I want to live with my family."

Justice | 'I want to live with my family'