Infiltrators expose the cruelty of meat 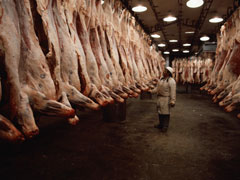 A beef factory worker inspects a row of cow carcasses that hang from the ceiling.(AP Images/Bettmann/Corbis)

Iowa companies that breed, feed, cage and kill animals for people who savor the taste of the creatures’ flesh are having anxiety attacks. In March, they persuaded the state legislature to pass a law meant to punish anyone who deceptively infiltrates slaughterhouses or factory farms to film or report the grisly goings-on. Utah has a similar law and other states are ready to go.

Nice try, agribusiness. But it’s too late. Thanks to the creative stealth of animal rights activists who are handy with hidden cameras as well as former workers who blew assorted whistles from the nation’s kill floors, the whole sordid story of unspeakable cruelty is out and easily available on DVDs, YouTube and the Internet. National nonprofits like Farm Animal Rights Movement, the Humane Society of the United States, Mercy for Animals, Compassion Over Killing, United Poultry Concerns, People for the Ethical Treatment of Animals, and Farm Animal Welfare Network deserve enormous praise for their persistent undercover work. One group alone, Mercy for Animals, has crashed some 20 facilities to film the abuse.

Instead of prosecuting infiltrators, authorities need to seek convictions of the owners of companies where genuine crimes are committed. Until that happens, says Michael Weber of the Farm Animal Rights Movement, things will be backwards: “It’s illegal to film the killing of animals but it’s legal to do the killing.”

Surveillance of the torture and killing of chickens, hogs, cattle, turkeys, ducks, buffalo and fish has led to a run of documentaries. “To Love or Kill: Man vs. Animal,” “Farm to Fridge,” “Meet Your Meat,” “Death on a Factory Farm,” “Earthlings,” “45 Days: The Life and Death of a Broiler Chicken,” “Hidden Suffering” and “Inside Tyson’s Hell: Why I Got Out of the Chicken Slaughtering Business” are among the current offerings, and most available with a click.

They show scenes of orchestrated cruelty required for the efficient killing of an estimated 9.4 billion creatures a year, not counting fish. I’ve shown many of the films in my classes on alternatives to violence. Students’ reactions range from outright crying to declarations that they will either reduce or totally eliminate meat, dairy and egg consumption. They understand Alice Walker: “The animals of the world exist for their own reasons. They were not made for humans anymore than black people were made for whites or women created for men.”

Other students remain untouched. Which is understandable. A film isn’t likely to undo the effects of exposure to the billions of dollars spent annually by McDonald’s, Wendy’s, Burger King and KFC on advertising the delights of meat. The shock value of a film may stir the mind but up against the nose, eyes and tongue -- meat smells good, looks good and tastes good -- the senses tend to win.

The fear of agribusiness companies, from giants like Cargill, Tyson Foods and Smithfield Foods to regional firms in a state like Iowa -- the nation’s largest killer of hogs -- is that the public will stop eating animal flesh and profits will suffer. Up against the willful blindness that refuses to make connections between the violence of factory farming and cellophane-wrapped and cheaply priced meat sold in supermarkets that has no resemblance to an animal, the industry is less in danger of sudden boycotts than in the public’s gradual awakening to the environmental costs of it all.

In Comfortably Unaware (Langdon Street Press), Richard Oppenlander argues, “The single most devastating factor that affects global warming and our environment is caused by what you eat. ... [With] every burger, steak, pot roast, turkey sandwich, fried chicken, rib, barbecue, pork chop, bacon, ham ... you are perpetuating the demand, which furthers the business of raising animals and then slaughtering them for you to eat. You can turn your head the other way but the process continues.”

Oppenlander reports that 55 percent of the nation’s fresh water flows to animals raised for food, with the same animals producing massive tons of excrement every day. It may soon be a choice of how we want to destroy the Earth: suck it dry of water or submerge it in manure. Whichever way we self-destruct, future historians in the final days won’t be blaming vegans or vegetarians.