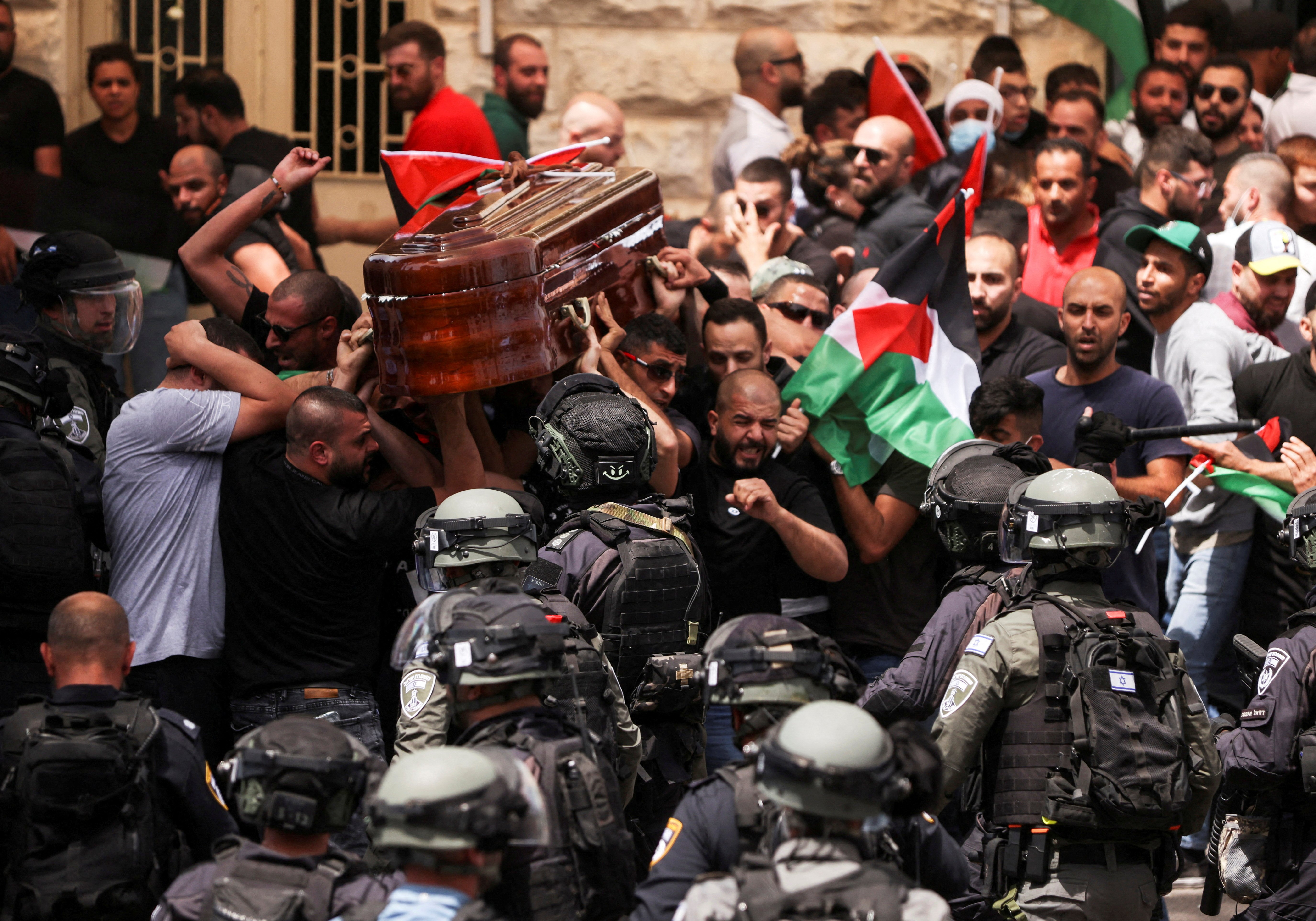 JERUSALEM — Israeli riot-control police attacked mourners and pallbearers as thousands came to pay their respects at the May 13 funeral of prominent Palestinian-American journalist Shereen Abu Akleh, who was killed in clashes between Israeli soldiers and Palestinian gunmen in Jenin, West Bank.

Video images show pallbearers struggling to keep Abu Akleh's coffin from falling to the ground as Israeli forces beat them with batons, tore down Palestinian flags and dragged people out of the hearse when the funeral procession prepared to leave the East Jerusalem courtyard of St. Joseph Hospital, where her body had been taken after a two-day memorial procession from Jenin and Ramallah.

According to Al-Jazeera, four people were arrested outside the funeral, which took place in the Melkite Catholic Cathedral of the Annunciation of the Virgin in Jerusalem's Old City. Mourners stretched for almost a quarter mile outside and down the packed street to the Jaffa Gate. Some people held up large crosses made of flowers.

Inside the funeral Mass, Abu Akleh's family members, including her brother, mourned close to the casket, as others pushed in. The casket was then carried in a procession of thousands to the nearby Mt. Zion Catholic Cemetery, where she was laid to rest next to her parents.

The Al-Jazeera TV news network, for which Abu Akleh worked, and the Palestinian Authority have accused Israel of deliberately killing the veteran journalist. Abu Akleh's producer also was injured in the shooting.

Israel has backtracked from its initial response that said she "was likely" killed by crossfire from Palestinian gunmen and said it is now conducting its own investigation into the shooting. The findings of an initial autopsy by a Palestinian coroner were inconclusive, and he could not determine how Abu Akleh died.

The Palestinians have refused Israel's request to analyze the bullet that killed Abu Akleh, saying they don't trust the Israelis.

The United States and European Union have called for an independent and transparent investigation into the shooting.

Abu Akleh, 51, was beloved by Palestinians as a journalist who took their voices to the world, and the church bells of Jerusalem rang out in unison as she was carried to her final resting place.

In a May 12 statement, the Latin Patriarchate of Jerusalem expressed its shock at Abu Akleh's death.

"We ask for a thorough and urgent investigation of all the circumstances of her killing and for bringing those responsible to justice," the patriarchate said in the statement. "This blatant tragedy brings back to human conscience the need to find a just solution to the Palestinian conflict, which refuses to enter oblivion ..."

The statement describes Abu Akleh as "an example of duty and a strong voice for her people."

"We pray for the rest of Shereen's soul ... and ask God to grant her brother and relatives the consolation of faith. We pray that the Palestinian people find their way to freedom and peace," the patriarchate said. "We pray for the recovery of journalist Ali Samouri, who was also injured while performing his duty, and for all journalists in the world who courageously perform their work."

After Abu Akleh's grave was sealed, mourners began leaving the cemetery, leaving family and friends, and those closest to Abu Akleh, a moment of quiet to mourn her death privately.