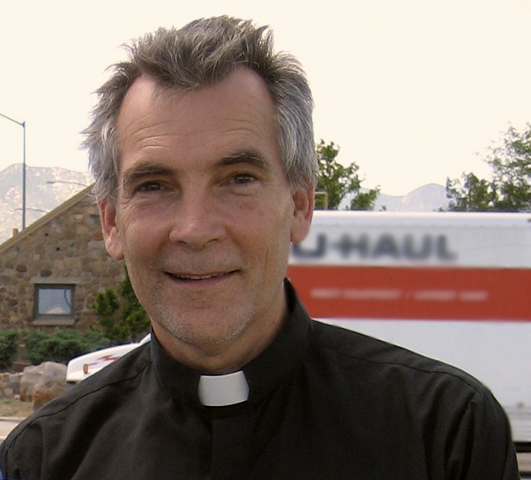 A noted Jesuit peace activist who has spent over a decade in jail for nonviolent protest actions, mostly over nuclear weapons issues, has been returned to prison for probation violations.

Fr. Steve Kelly, who has been on probation since June 2012 after serving a 15-month sentence for breaking into a nuclear weapons facility, was sent back to prison May 20 by a federal judge.

Kelly, 64, was transported from the SeaTac Detention Center to the United States District Court, Western District of Washington at Tacoma, to receive the 60-day sentence. With time served, he is expected to be released May 29.

More than a dozen friends and supporters, including members of Tacoma’s St. Leo parish community and his Jesuit superior Fr. John Fuchs, attended the hearing. Some also attended a vigil outside the courthouse an hour before Kelly’s court appearance.

Kelly was arrested March 29, Good Friday, for blocking a road outside the Lockheed Martin missile plant in Sunnyvale, Calif. A trespassing charge was later dropped, but he was taken into custody for an outstanding federal warrant associated with probation violations.

Kelly was on probation for the 2009 Disarm Now Plowshares action, during which he and four other activists cut through multiple security fences and accessed highly sensitive areas of the U.S. Navy’s Strategic Weapons Facility, Pacific in Bangor, Wash., where more than 2,300 nuclear weapons are believed to be stored.

After serving 15 months in prison for that action, Kelly was released June 21, and his first probation violation occurred within 72 hours when he failed to contact his probation officer.

After serving 15 months in prison for that action, Kelly was released June 21, 2012, and his first probation violation occurred within 72 hours when he failed to contact his probation officer. Kelly had made it clear during sentencing and upon release that he would not abide by the rules of probation as a matter of conscience.

A couple months later when he traveled to Atherton, Calif., for the funeral of Sacred Heart Sr. Ann Montgomery, a longtime activist and friend who had been part of the Disarm Now Plowshares action.

In court May 20, Kelly made an emotional appeal for the abolition of nuclear weapons and the healing of divisions between people. Other testimonies praised Kelly’s character and commitment to peace.

Fuchs addressed the judge on Kelly’s behalf stating, “Fr. Steve Kelly is one of my brother Jesuits … Our religious Constitutions commit us to working for peace and justice in our world, resisting all forms of violence and unjust war, following our consciences regardless of the consequences. Steve is being faithful to his vocation as a Jesuit.

“I know Fr. Steve very well, having directed him in a number of spiritual retreats, and I can assure you … that he is one of the most nonviolent, gentle and committed persons I know,” Fuchs said. “I only wish that I and the rest of us could be nearly as courageous as he has been in following his call.”

Over the past two decades, Kelly has been imprisoned for an estimated 12 years, according to St. Leo parishioner and friend Joe Power-Drutis. Kelly has been held often in solitary confinement because as a matter of conscience he refuses to work for the Bureau of Prisons while incarcerated.

Kelly discussed his unique witness in a 1998 interview with America magazine. “My hope is that the church will really become a peace church,” he said.

“I realize that what I’ve done is not what most people would call being an effective witness. I don’t expect the culture as a whole to change overnight. The people I would like to reach are people of faith and belief. As for what I’ll be doing in the future, as long as nuclear weapons are being made for use on human beings, I’ll try to resist their creation.”