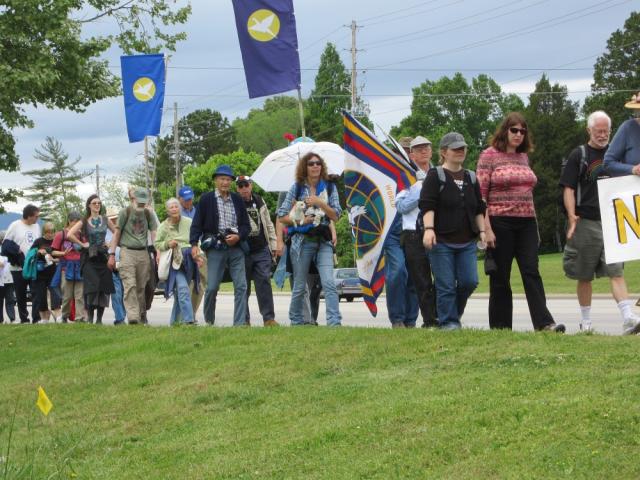 An influential panel of U.S. military strategists on Wednesday called for an 80 percent reduction in the number of the nation's nuclear weapons, saying current policy "unnecessarily incurs risks of unintentionally initiating a nuclear conflict," a conclusion many in the Catholic community, including activists and bishops, have supported for decades.

In a report released by the advocacy group Global Zero, retired Gen. James Cartwright and others argue that the United States should reduce the total number of its warheads to 900 or less with only half of them deployed at any one time; take the weapons off what is known as high-alert status; and reconsider moves to create several new nuclear weapons manufacturing facilities across the country.

In a conference call with members of the press Wednesday, Cartwright, a former vice chairman of the Joint Chiefs of Staff, who chaired the report, said part of the reason its authors called for such large cuts was because U.S. leaders have become "not credible" when they call for other nations to reduce their weapons stockpiles.

"It's become a real problem for us," he said.

News of the report comes as President Barack Obama is weighing options for the future direction and scope of the U.S. nuclear complex. An official executive-branch report on the matter, called the Nuclear Posture Review implementation study, is expected in coming months.

Hopes for a reduced number of nuclear weapons in that report were first raised in January when a Defense Department report, called a "guidance," stated, "It is possible that our deterrence goals can be achieved with a smaller nuclear force."

A number of news reports have said Obama could be considering a deployed nuclear force of between 300 to 1,100 deployed warheads. While the current number of deployed warheads is confidential, the United States is required to reduce the total number to 1,550 by 2018 to be in compliance with the New Strategic Arms Reduction Treaty, which entered into force in February 2011.

The U.S. Conference of Catholic Bishops is among the groups lobbying the president to consider a significant reduction in that number. According to a Tuesday report from Catholic News Service, the bishops in early May joined about four dozen other national organizations in amassing more than 50,000 signatures on a petition asking the president to "dramatically reduce" the number of warheads.

The Global Zero report, which is also signed by former Sen. Chuck Hagel (R-Neb.) and retired Gen. Jack Sheehan, among others, argues that the nation's nuclear weapons can be moved off of hair-trigger alert, which allows their launch within minutes and has long worried analysts.

Writing that such a move "would greatly reduce nuclear risks," the authors recommend additional steps be required before launch so it would take between 24 and 72 hours to fire a nuclear weapon.

They also recommend that nuclear warheads and their delivery rockets be kept separate in storage "in order to increase decision time, strengthen safety and security and prevent mistaken or unauthorized launches."

Also specifically mentioned in the report are two of three nuclear weapons facilities in the works. Those three -- in Kansas City, Mo., Los Alamos, N.M., and Oak Ridge, Tenn. -- have been the subject of protests by activists, including many Catholics, who have asked why the country would build new facilities as it considers nuclear reductions.

While the report mentions the Los Alamos and Oak Ridge projects, it does not recommend they be abandoned, only writing that "the costly modernization of the nuclear complex currently underway ... can be restructured and downsized."

Cartwright said on the Wednesday conference call that the three planned facilities were originally approved following passage of the Comprehensive Test Ban Treaty, which would ban all nuclear explosions by signatories. That treaty, adopted by the U.N. General Assembly in 1996, has not entered into force because of an unwillingness to ratify it by 25 of the signatories, including the United States.

Following passage of that treaty, Cartwright said, the three facilities were "put in place as an alternative to testing, in large measure. And to make sure that the science that underpins the capabilities we have is solid."

Protests at the Kansas City site, which is estimated to carry a total cost of $1.2 billion and is scheduled to be partially operational by early next year, have been led in part by area Catholics, who have also been leading petition campaigns to remove funding from the site.

One of the petitions, focused on developing a plan for reuse of the facility should it be abandoned in light of weapons cuts, was unanimously passed by the local city council in March.

Writing that current nuclear policy "focuses too narrowly on threats rooted in Cold War thinking," the authors of the Global Zero report conclude: "By maintaining launch-ready nuclear postures just as they did during the Cold War, the United States and Russia run risks of nuclear mistakes that could have catastrophic consequences."

Reflections on an immigration journey

Nuncio: World won't be more 'genuinely' human unless all work for peace

Georgetown, other historical beneficiaries of slavery, should be held accountable