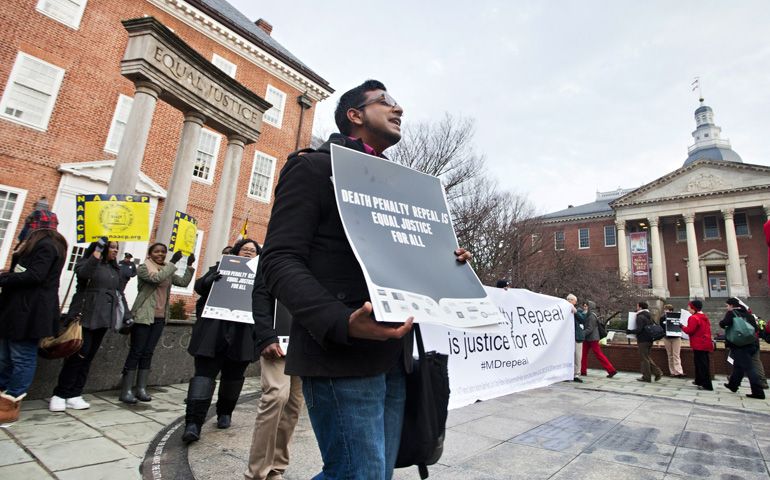 Travis Ballie joins others in chanting for the repeal of the death penalty in Maryland during a rally in early January hosted by Maryland Citizens Against State Executions on the Lawyer's Mall in front of the Statehouse in Annapolis. Maryland's death penalty was abolished May 2. (CNS/Catholic Review/Tom McCarthy Jr.)

Washington — Terri Steinberg said she never thought about the death penalty until her son was put on death row.

Steinberg said her son, Justin Wolfe, spent 12 years on death row in the state of Virginia after initially turning himself in to the police to clear his name from murder charges. But he was convicted. That conviction was vacated in late 2012, but he remains in jail and faces retrial on the charge of capital murder.

"I never thought about it (the death penalty) before," Steinberg told Catholic News Service in an interview. "Now, it's the forefront of our lives."

The death penalty took the spotlight most recently with the execution of convicted murderer Joseph Franklin in Missouri. Despite a plea for clemency in a Nov. 15 letter from the state's Catholic bishops and leaders of other religious and human rights organizations, Gov. Jay Nixon refused to stop the execution.

Franklin, convicted for the murder of Gerald Gordon in 1977, spent more than two decades on death row. He was executed by the state of Missouri at midnight Nov. 20.

Rita Lindhardt, a senior staff member at the Missouri Catholic Conference who works on death penalty issues, said although Franklin also had committed a series of hate crimes, he suffered from mental illness.

From the perspective of the Catholic church, Lindhardt said, capital punishment violates the sanctity and dignity of human life.

"It was a tragedy that Mr. Franklin was executed," she told CNS in a phone interview. "It's very sad for a state to spend so much time and energy to execute a person with mental illness."

Currently, 18 states do not have the death penalty. Maryland is the latest state to have abolished it. Earlier this year, the Maryland Legislature repealed it and Gov. Martin O'Malley signed it into law May 2.

In New Hampshire, the Legislature is now considering a bill to repeal the death penalty, and it has the backing of Bishop Peter Libasci of Manchester.

Libasci said capital punishment does not send any message of deterrence. Instead, it "publicly validates the very act of taking a human life" and proclaims there is no "sacrilege" in taking a life, he said in an October statement.

Over the past 20 years, the death penalty has slowly declined in popularity in the United States, falling from an all-time high in 1994 of 80 percent in favor to around 63 percent in favor in 2012, according to Gallup. In 2013, that figure has dropped to 60 percent. Men account for 98 percent to 99 percent of all those executed nationwide.

The Catholic church has taught clearly that while the death penalty might be allowed if it were the only way to protect society against an aggressor, those cases, according to the Catechism of the Catholic Church, are "very rare if practically nonexistent."

That teaching was one focus of a symposium titled "Where Justice and Mercy Meet: Catholic Opposition to the Death Penalty" held Nov. 9 at The Catholic University of America's Columbus School of Law in Washington.

The event was co-sponsored by the university's Institute for Policy Research & Catholic Studies, the law school and the Catholic Mobilizing Network. It featured panelists from different Catholic universities, as well as keynote speakers Vicki Scheiber and Sr. Helen Prejean, a Sister of St. Joseph, a well-known national figure in the fight against the death penalty.

One panelist was Msgr. Stuart Swetland, vice president for Catholic identity at Mount St. Mary's University in Emmitsburg, Md. He said the Catholic bishops "should be commended for their hard work and persistence" against capital punishment. He has worked in Illinois and Maryland, two states which no longer have the death penalty.

Scheiber was among those who played a major role in lobbying against Maryland's death penalty. Her daughter was murdered more than two decades ago.

That effort to bring an end to capital punishment in the state, Mary Ellen Russell, executive director of the Maryland Catholic Conference, told to CNS how its opponents mobilized and said a key part of the effort was the testimony of Maryland's Catholic leaders before state lawmakers combined with the leadership of O'Malley, himself a Catholic.

"He took the leadership role of getting the bill across the finish line," Russell said.

Cardinal Edwin O' Brien, then head of the Baltimore archdiocese and now a Vatican official, Archbishop William Lori of Baltimore and Baltimore Auxiliary Bishop Denis Madden all testified against the death penalty. The repeal also had the support of the Washington archdiocese and the diocese of Wilmington, Del., whose territories include some Maryland counties.

Russell added that Kirk Bloodsworth, a former death-row inmate in Maryland who was exonerated, also lobbied relentlessly for the cause.

The Catholic conference also helped form Citizens Against State Executions, known as CASE and led by Jane Henderson. Russell said tens of thousands of Maryland citizens are active in the group.

Prejean, death-row counselor and author of the best-selling "Dead Man Walking," said God's grace is evident in the suffering of those condemned to death and their families.

"Enlightenment is the direct action of God's spirit in us," she said at the symposium in Washington. "St. Bonaventure said, 'Don't ask for the understanding, ask for the fire.'"

Prejean said the executions she has witnessed "set my soul on fire. We are taking a defenseless person and killing them."

The nun, who grew up in Louisiana, said the 10 former slave states of the South do 80 percent of executions in the United States. She said race plays a part in the application of the death penalty.

Symposium attendee Markus Williams of Silver Spring, Md., has known Prejean for years, and, like her, opposes the death penalty.

"I call it genocide," he said. "The death penalty targets a certain group of people, minorities and the poor."

Steinberg said the death penalty perpetuates the cycle of violence.

"Why do we kill people to prove that killing is wrong?" she said. "The death penalty is never the answer. All it will do is create more victims in families."

As for her son, Wolfe maintains his innocence. He remains in custody in Prince William County, Va., awaiting a new trial date. His original conviction on the charge he ordered the murder of a drug dealer was based primarily on the testimony of the gunman, who got a plea deal and later recanted.

"We trust the system until we learn what it does," Wolfe's mother told CNS.

Steinberg has met other families whose loved ones are currently on death row. She said the horrific punishment of being sentenced to death completely changes individuals, including her son.

"The person I know is not the same person (after being on death row)," Steinberg said.

Justice | For mother of prisoner, death penalty issue in 'forefront of our lives'